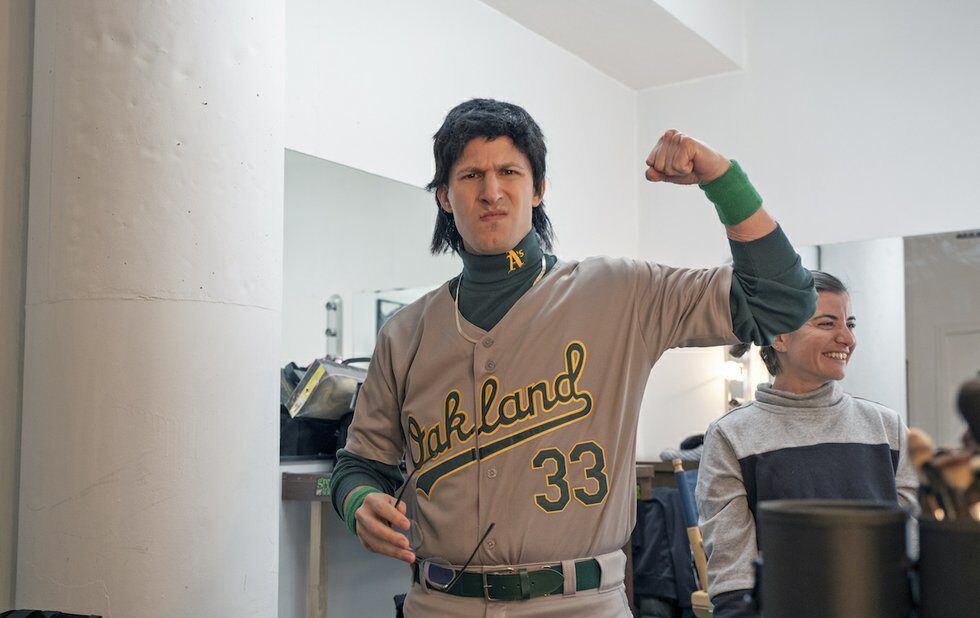 How far has poptimism gone?

Over the last decade, the critical shift to take pop music seriously has gone beyond turning singers like Lady Gaga and Beyoncé into darlings of the press: it’s turned them into Terrence Malick. Case in point: the visual album trend. Over the last decade, artists like Childish Gambino, Frank Ocean, The Dirty Projectors and the aforementioned Bey have flexed their cinematic chops, following the influence of Prince and Janet Jackson with statements that go beyond music videos in their visual ambition.

That’s the starting point for The Lonely Island Presents: The Unauthorized Bash Brothers Experience. The new Netflix special – a surprise drop, naturally – is billed as a “visual poem,” a 30-minute suite of interconnected songs that also comes with an accompanying album.

There’s another starting point, too: the whole thing is an imagined rap album by then-Oakland Athletic baseball goliathes – sorry, goliaths – Jose Canseco and Mark McGwire, played by Andy Samberg and Akiva Schaffer, in 1988 before they won the World Series the next year.

One on level, it’s an almost perfect illustration of Netflix’s blank-cheque approach to original content. They took the established entity of the Lonely Island – who’ve already stretched their ambition beyond the three-minute visual shorts they did on Saturday Night Live with projects like the underrated 2016 cult feature movie Popstar: Never Stop Never Stopping – gave them a budget and said, presumably: “here, do what you want.” And what they wanted to do was something ultra-specific and likely based on personal nostalgia, given their Bay Area upbringings in the 80s.

The blank-cheque approach is perfect for comedy, which thrives when the big names say “fuck it” and commit to their strangest ideas. Just look at the Lonely Island’s fellow SNL alumnus Will Ferrell, who’s used his untouchable status to make straight-faced Lifetime movies and Spanish-language telenovelas. Just recently, the Lonely Island produced Tim Robinson’s viral Netflix sketch comedy series I Think You Should Leave, whose absurd specificity has made it a word-of-mouth hit. (Zach Galifianakis’s Between Two Ferns: The Movie is coming to Netflix in September.)

But Bash Brothers isn’t as niche as it seems. You don’t have to know anything about the Oakland Athletics’s 80s heyday to enjoy the songs, which attach a long-form premise to Lonely Island’s usual mix of hip-hop conventions and punchlines. Canseco and McGwire become avatars for Big Themes: the build-up/tear-down nature of hero worship, the pressures of fame, friendship, steroids and a whole lot of daddy issues.

That’s not subtext: it’s spelled out in interstitial spoken monologues by Samberg/Canseco, using his most serious and pretentious dramatic whisper rasp to tell the audience about how he and his baseball buddy flew too close to the sun. Visually, directors Schaffer and Mike Diva give us slow-motion images of heaven, angel wings and a fetus floating in an orb. It’s a legit visual spectacle, and you can almost imagine Kanye West taking notes for his next project.

Of course, this is also a Lonely Island project, so it’s filled with silly rap verses about dance-offs in IHOP parking lots, shooting performance-enhancing drugs into your ass (a deep well Samberg is returning to after the bicycle-themed Tour De Pharmacy) and bench pressing bodacious babes in bikinis.

There are memorable moments in many of the songs – like when Jose and Mark stop mid-song to look up the plural of “goliath” in the dictionary, a rap verse that includes the name of every team in Major League Baseball, or when the Haim sisters, along with Stephanie Beatriz and Maya Rudolph, implore the Bash Brothers to dance by telling them to “shake four halves of butt” – but the baseball premise does limit them a little.

The Lonely Island’s best songs are ones that build and deconstruct their premise in the span of the same song. Think Jack Sparrow, a song in which Michael Bolton doesn’t get the club banger memo and instead sings a “big sexy hook” about Pirates Of The Caribbean. Or We Like Sportz, a sports anthem sung by two guys who’ve clearly never watched sports. Sticking to the same premise for the span of a whole concept album holds them back, even if they do still find the chance to put Sterling K. Brown in a kimono and get him to lipsync a Sia hook.

There’s also the fact that the real-life Jose Canseco is more absurd than anything the Lonely Island can come up with. It’s funny enough to hear Samberg rap about Canseco’s brief relationship with Madonna (she wanted Cuban babies, he says) but no joke is going to approach the real Canseco liking the Bash Brothers film so much that he publicly tweets his manager’s phone number at the Lonely Island.

In the end, what stands out about the project is not the baseball premise, but the format: the first and best tear-down of the visual album conceit.