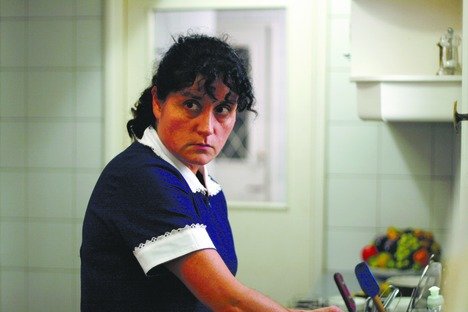 There’s a point in The Maid when you worry that the eponymous housekeeper might blow up the entire household. But get it over it: director Sebastián Silva has a much more nuanced perspective.[rssbreak]

Raquel (a sensational Catalina Saavedra), housekeeper and nanny in the service of a Santiago family for over 20 years, is loyal, territorial and absolutely joyless. When Pilar (Claudia Celedón), a mother of three, hires additional help in the huge home, Raquel panics, stooping to outrageous acts in order to force each of them to quit. Headaches plague her – another source of tension. You wonder if a nascent brain tumour has caused her to lose her grip.

Silva, who also wrote the script, grasps the paradoxes, starting with the bourgeois behaviour of Pilar, her husband and the kids, who condescend to Raquel but still say she’s part of the family. They remind me of the U.S. soldiers in The Hurt Locker trying to make friends with the Iraqis they’ve invaded.

Raquel, for her part, has no power but has taken almost complete control – not that that increases her satisfaction. The arrival of Lucy (Mariana Loyola), an open-hearted household helper whom Raquel accepts, might change that.

Silva’s style is observational – scenes tend to comment on the situation rather than show the characters changing and growing. Lucy’s presence has a powerful influence on Raquel, but it’s not completely clear why. And the strange ending doesn’t really make sense.

But see the film if only to appreciate Saavedra as Raquel. She’s a knockout.