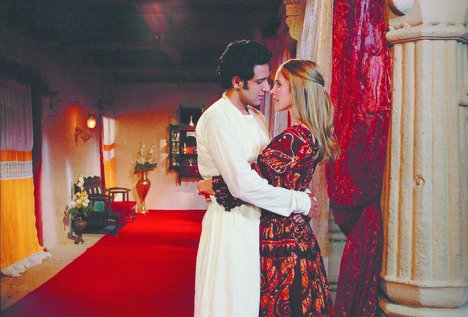 Writer/director Kruti Majmudar has a good eye – she has a degree in architecture and previous art directing credits – so her debut feature, The Memsahib, is very beautiful. In every other way, though, it’s a mess.[rssbreak]

In 1851, Grace (Emily Hamilton) travels from England to India to marry the love of her life, Raja Jayant (Parvin Dabas, from Monsoon Wedding), and live in his spectacular palace. His commitment to his British ties – both colonial and personal – has violent repercussions.

When the setting suddenly shifts to 2005, British student Asha (Hamilton again) has been brought to the same palace, where she is drawn to Vijay (also Dabas), one of its residents, for mysterious reasons.

Majmudar doesn’t know how to tell a story. If she’d begun in 2005 and flashed back, the narrative would be less confusing. If she could write dialogue that wasn’t stilted, we’d get depth instead of two-dimensional characters spouting political slogans.

And if she offered some background on reincarnation, the whole thing wouldn’t feel so hopelessly hokey.