NOW MagazineMovies & TVReviewsReview: The apocalypse is predictable in George Clooney’s The Midnight Sky

Review: The apocalypse is predictable in George Clooney’s The Midnight Sky 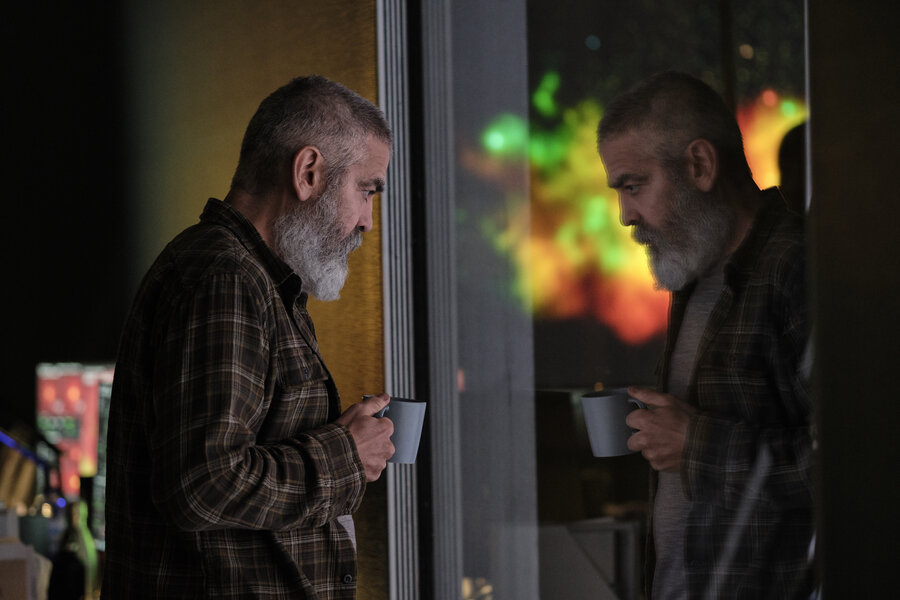 At least there'll be coffee at the end of the world.

The most frustrating thing about The Midnight Sky is that you can see a way for it to work. Or at least I could; just a couple of minor tweaks – move this revelation up here, tweak that casting choice, fix this tonal decision – and George Clooney’s mournful drama about the choices we make at the end of the world could have landed with the power he clearly intends.

But Clooney made the movie he wanted to make, and … no.

Adapted by Mark L. Smith from Lily Brooks-Dalton’s novel Good Morning, Midnight, The Midnight Sky is set in 2049, “three weeks after The Event,” an undefined apocalypse that has wiped out almost all life on Earth. Clooney plays Augustine, a dying astronomer who chooses to stay behind at a remote Arctic observatory, either because he’s not well enough to return home to die with everyone else or because he never had much time for other people in the first place.

His work takes precedence, as it has all through his life: as we see in flashbacks, Augustine has denied himself any happiness – with people, with life, with anything – to remain focused on the search for a new home for humanity. And now, ironically enough, he may have found one – and no one is left to settle it.

Augustine’s new world is called K-23, a recently discovered moon of Jupiter that can support human life. The other characters in The Midnight Sky are five astronauts – played by Felicity Jones, David Oyelowo, Demián Bichir, Tiffany Boone and Kyle Chandler – returning from a mission to verify its habitability. And in the wake of The Event, it is Augustine’s miserable task to convince them to abandon Earth entirely… assuming he can drag his faltering body to an even more remote station, and send them that message.

There is also a little girl (newcomer Caoilinn Springall), whom Augustine finds hiding in his observatory. Her name is Iris. She doesn’t speak, but has the watchful-yet-mischievous presence of a perfect movie kid, existing primarily to draw our hero out of his shell – and give Clooney someone to talk to during his long stretches of screen time. In their quieter moments together, The Midnight Sky touches up against the lonely melancholy of Steven Soderbergh’s Solaris, another science-fiction drama in which Clooney played a man whose missed opportunities span an entire galaxy.

Back in space, the astronauts find themselves struggling with course corrections and the brutal hostility of space, and we are reminded that George Clooney was in Gravity, too, and really enjoyed helping Alfonso Cuarón solve the problems of making an emotional movie about survival in the void.

Watching The Midnight Sky, I found myself wondering what it would have looked like with either Soderbergh or Cuarón at the helm, since Clooney’s direction draws on both artists’ work.

Soderbergh would have found a better solution for the movie’s tendency to be frustratingly vague about so many key details. (Not only is The Event never clarified, but Augustine’s terminal illness is never specified, and certain other background details are deliberately fudged in order to create a dramatic payoff that never really happens.)

And Cuarón, who made Children Of Men as well as Gravity, would have found a better way to convey the horror and heartsickness at the core of this story, both in Augustine and among the astronauts. All five actors do their best, but the film is focused so tightly on Jones’s pregnant Sully that it’s difficult to carve out personalities in the short time allotted them.

Really, though, I think the director Clooney seems most intent on referencing is Stanley Kramer, the old-school message filmmaker who gave us Inherit The Wind, Judgment At Nuremberg and 1959’s doomsday drama On The Beach, which a character is seen watching in The Midnight Sky. (I am not entirely sure why, but maybe after two years in space he’s watched every other movie in the MGM library.)

On The Beach similarly focused on the last people on Earth, a handful of Americans and Australians waiting for the fallout from an unseen nuclear war to reach them, deciding what to do with the time they had left. Its hopeless ending was designed to inspire audiences to think about how to avoid a similar fate – for themselves, and the planet.

I think Clooney wants to do something similar with The Midnight Sky, but it gets lost in a final flurry of putative surprises meant to hammer home the true cost of Augustine’s misplaced priorities. Not a single one of those surprises is a surprise, and indeed they’re so gratingly obvious that they basically blast the film off its axis and send it spinning into the sun. (No, wait, that’s The Day The Earth Caught Fire.)

Anyway. Maybe there’s a better version of this movie in a hard drive somewhere – one where Ethan Peck’s character isn’t dubbed, one where Augustine’s ailment is named so we know what it is and isn’t physically capable of enduring, and where one other terrible narrative choice is erased by having a character acknowledge something that is very, very obvious to everyone on the other side of the screen.

I wonder whether that version would better serve the things about The Midnight Sky that do work: Clooney’s sad, broken performance, the rapport between Jones and Oyelowo, the striking production design, the outstanding visual effects. It’d be nice to appreciate them as part of a movie, rather than elements in a vacuum.