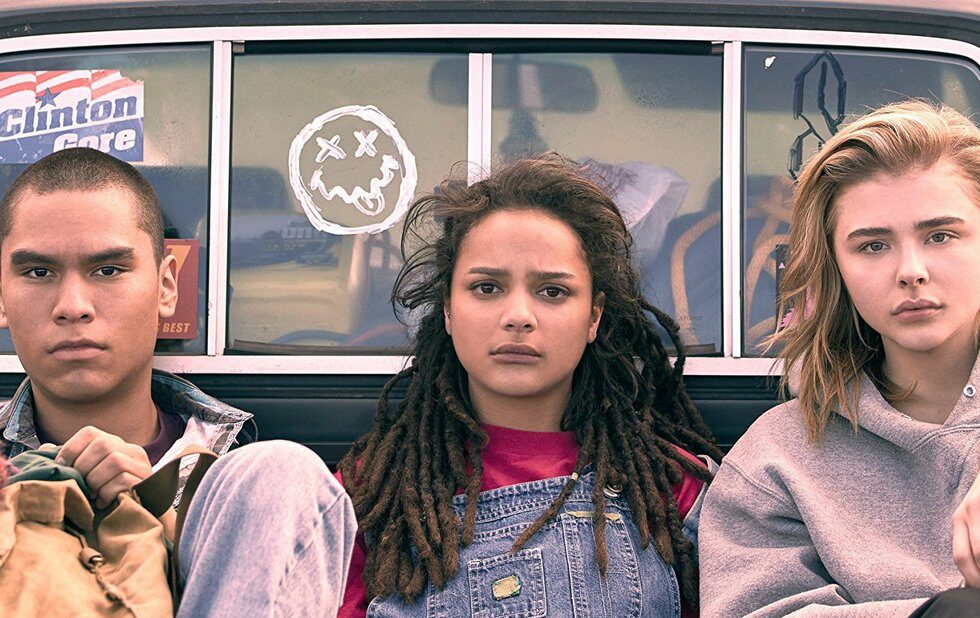 The Miseducation Of Cameron Post is a coming-of-age story about a frustrated coming-of-age. In a sensitive performance, Chloë Grace Moretz plays the titular character, a teen sent to a gay-conversion camp after she’s found having sex with her best friend, Coley (Quinn Shephard) on prom night.

While she delivers an engaging drama that wrings subtle but affecting emotions from a subject it could have easily exploited for outrage (as Cameron says at one point, “How is teaching teens to hate themselves not a form of psychological abuse?”), the film’s characterization is uneven.

Moretz plays Cameron as a young woman just beginning to enjoy the pleasures of lesbian sex – not to mention the first pangs of falling in love. Yet, as a teen, she’s still forming a sense of self. When she arrives at the camp, called God’s Promise, she knows she doesn’t want to be there but she isn’t in instant rebellion mode. Instead, she’s in impressionable teenager mode.

When Dr. Marsh tells her the first step is to stop thinking of herself as a “homosexual,” Cameron replies, “I never thought of myself as anything,” which speaks to both her naiveté and the potential she has for a radical definition of self. Moretz’s portrayal keeps both these poles at the forefront. Cameron is sure of what she likes and can articulate what she believes, but she’s unsure of how that will fit into the small-town society surrounding her. (The film takes place in the early 90s.)

Moretz is surrounded by a satellite of supporting characters with varying strengths. Emily Skeggs plays Cameron’s camp roommate, Erin, who, we’re told, “probably turned herself in.” Erin earnestly believes the camp’s methods will allow her “to get past” her attraction to women. But there’s a tender scene midway through that reveals her tenuous grasp on this belief even as she remains dogged. Skeggs communicates this to Cameron in a single, heartbreaking line.

Akhavan excels at communicating the weight of her subject matter in scenes with little dialogue or action. Her camera likes to linger, waiting around for any unresolved consequences of an action or for an actor’s body language to give away emotions that might further reveal their inner conflict.

The actors rise to the occasion, particularly Jennifer Ehle as Dr. Lydia Marsh, founder and sole therapist at the camp. Her unyieldingly clinical demeanour could have made for a flat character if it weren’t for those moments where Akhavan’s lens is trained on her, inviting viewers to unpack what might possibly be driving her single-minded adherence to conversion therapy. Not that any of those reasons would redeem her. She is the story’s clear villain. Or as one of the camp’s residents, Adam Red Eagle (Forrest Goodluck), remarks, “She’s a Disney villain that won’t let you jack off.”

Sasha Lane, who made her film debut in 2016’s American Honey after director Andrea Arnold spotted her sunbathing, is a magnetic presence, but she’s underused. As the rebellious Jane Fonda (yes, that is the character’s name), she has little to do other than serve as the self-assured character who helps shepherd Cameron into her own self-awareness. That it’s a person of colour inhabiting this role is a problematic trope that Akhavan seems unaware of. Otherwise, why not give Jane Fonda more to do? The director has already shown she’s deft at giving her supporting character’s dramatic arcs – à la Erin’s storyline or that of Adam’s roommate, Mark (Owen Campbell), who has a tragic incident preceded by a powerful monologue. Yet Jane is left with little depth or development.

The film also errs when it attempts to draw a comparison between gay-conversion facilities and the residential school systems, which perpetuated cultural genocide on Indigenous peoples by attempting to assimilate them into Western culture.

Adam Red Eagle is a two-spirit, Native youth. There’s a classroom scene in which an agitated Dr. Marsh marches over to his desk and roughly ties back his long hair, threatening to shave it off. “I’ve told you to keep your hair out of your eyes,” she says. “There’s no hiding from God.”

These aggressions continue throughout the film. But it’s not necessary to compare oppressions in order to make a point about their severity. There’s the danger of removing complexity – and the film does just that, weakening its impact in the process.