The Princess And The Frog

Not a big leap 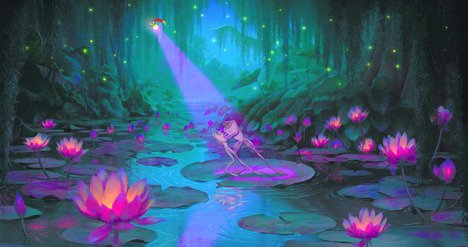 The Princess And The Frog doesnt take the Disney crown.

The Princess And The Frog brings Walt Disney Pictures back into the hand-drawn animation business – though it does so mostly by reminding us how great the studio’s previous ink-and-paint productions were.[rssbreak]

This tale of 1920s New Orleans waitress Tiana (voiced by Dreamgirls co-star Anika Noni Rose), turned into a frog when she kisses a similarly enchanted prince (Bruno Campos), borrows most of its character design from previous Disney productions. There’s an alligator that looks oddly like the crocodile from Peter Pan, a Cinderella-type footman, and so forth.

The story, too, is strangely familiar – a chunk of The Emperor’s New Groove here, a slab of Beauty And The Beast there – which proves to be the real problem, since the clashing dramatic and comedic elements keep directors John Musker and Ron Clements from ever settling on a consistent tone.

That’s surprising, since these are the guys who resurrected the Disney animation brand 20 years ago with the pitch-perfect lightness of The Little Mermaid.

Even when the serious stuff falls flat and the racial caricaturing gets a little sticky, the movie still has its moments – most of them thanks to Campos’s suavely confident performance as the proudly inept Prince Naveen and Jennifer Cody’s brassy line readings as Tiana’s comic-relief pal Lottie. Tiana herself, though, is a bit on the dull side.