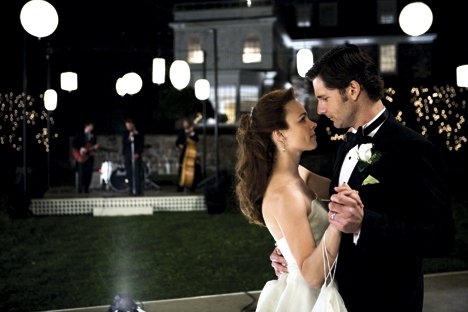 Watching the movie version of The Time Traveler’s Wife, I found myself wondering why everything seemed so quiet and removed. Then I picked up Audrey Niffenegger’s 2003 novel, and it all made sense.

Niffenegger’s book plays out as a series of paired internal monologues, recounting each incident in the decades-long dance of the chronologically displaced Henry (Eric Bana) and his beloved, linear-living Claire (Rachel McAdams) from each character’s perspective.

The movie drops the monologues and moves objectively forward in time, but follows Henry on some of his leaps. The result is an unmoored narrative that keeps stopping and starting, hiccuping through Niffenegger’s story without ever quite engaging with it. Everything’s smoothed out and glossed over, the better to appeal to some imaginary chick-lit audience – but as a result, any recognizable emotion that might have resonated with that audience is buffed away.

It doesn’t work as sci-fi either. Bruce Joel Rubin’s script doesn’t even attempt to engage with the metaphysical possibilities of the time-jumping gimmick, using it strictly as a plot device and letting the paradoxes fall where they may.

As in The Notebook, McAdams proves too vibrant a screen presence to be totally subsumed by the material, but Bana’s terminal lack of charisma means she’s stuck doing the work of two stars.