NOW MagazineMovies & TVReviewsReview: The Two Popes is a dialogue-heavy film about papal succession that says nothing

Review: The Two Popes is a dialogue-heavy film about papal succession that says nothing

Anthony Hopkins and Jonathan Pryce enjoy themselves as Popes Benedict and Francis, but the film is a snooze 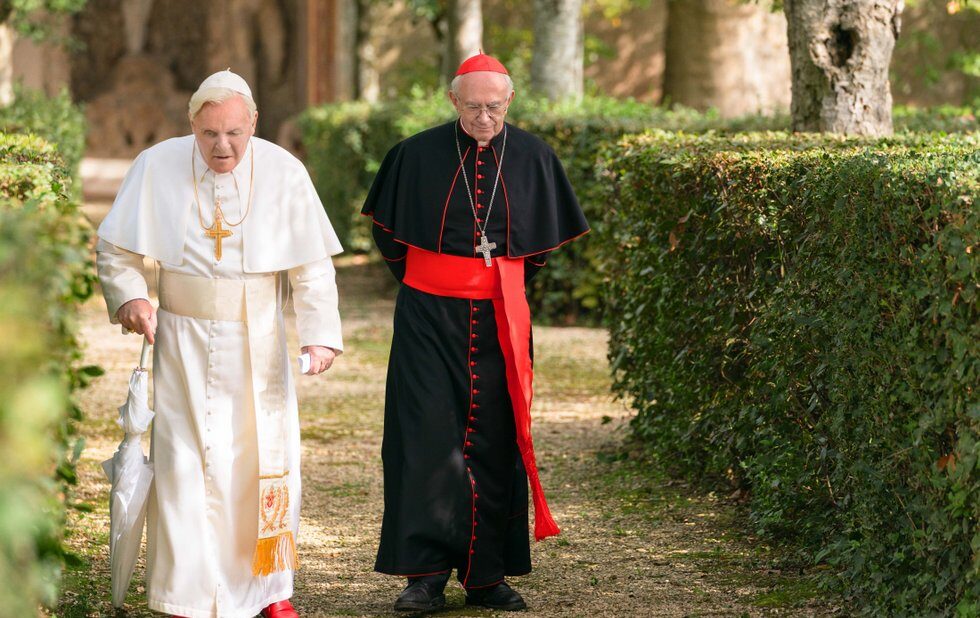 The Two Popes is not an especially good movie about papal succession and the state of the modern Catholic Church, but it does feature Jonathan Pryce and Anthony Hopkins enjoying themselves immensely in luxurious surroundings, so factor that into your thinking.

Opening at the TIFF Bell Lightbox three weeks before it comes to Netflix – the current formula for films the streaming giant wants to position as important cinematic works that could also maybe pick up a few Oscar nominations in the new year – this chamber drama from Brazilian director Fernando Meirelles imagines the cautious conversations in the Vatican in late 2012 between the aging Pope Benedict XVI (Anthony Hopkins) and Argentine cardinal Jorge Bergoglio (Jonathan Pryce), the man who will become his successor.

Bergoglio, who was disillusioned by Benedict’s confirmation in 2005, has come to Rome to resign his position Benedict, presiding over a Church rocked by scandals, is preparing to step down himself, though he’s still keeping that quiet. The two men sit down together to discuss the state of things, and the possible futures each man might have, and an initially interesting drama gets less and less so as the conversations go on.

The ideal version of this genre is Stephen Frears’s The Queen, in which screenwriter Peter Morgan dramatized the early encounters between Elizabeth II and Tony Blair, as the new prime minister tried to convince the monarch to share her private pain over the death of Princess Diana. But that film grounded its historical interest and political gamesmanship in Helen Mirren’s rich, emotionally complex performance even Morgan himself hasn’t been able to recapture that specific recipe.

Fun fact: Two Popes screenwriter Anthony McCarten shares credit for last year’s Bohemian Rhapsody with Morgan. McCarten’s other projects, the superficial biopics The Theory Of Everything and Darkest Hour, showed their subjects living their lives without exploring their souls. Similarly, The Two Popes manages to be a story about Benedict that shrugs off all the controversies that dogged him during his reign, from his activities in WWII to his complicity in the sheltering of predatory priests decades later. (Even the banking scandal that forced his resignation is shoved into the background, the work of a rogue assistant.)

Bergoglio is similarly buffed and burnished, his own associations with the murderous junta that ruled Argentina while he was the head of the country’s Jesuit order waved away as naïveté rather than properly interrogated, despite long flashbacks to that era.

Meirelles, who worked with Hopkins in the forgotten 360 (another Morgan script, as it happens), directs as fussily as possible, playing with snap zooms and extreme close-ups and artful compositions to no real effect. Sometimes The Two Popes is staged like a documentary, its actors wandering around crowded markets and hushed galleries. At other times, it goes fully cinematic. There’s no why or wherefore to any of it the artistic decisions provide no insight into anyone’s state of mind.

I cannot deny that Hopkins and Pryce are very good in the roles, each playing to his specific strengths. Hopkins’s bullish charisma is perfect for the imperious Benedict, while Pryce’s steely delicacy is well suited to Bergoglio, an unassuming, pleasant fellow who likes football and dislikes confrontation.

For the curious: Pryce affects an accent, and a couple of Bergoglio’s Spanish-language speeches have been dubbed by a native speaker Hopkins is just his plummy Welsh self. But for all the dialogue they volley back and forth (in four languages apiece!), you’ll notice neither of them really says much of anything.

Neither does the movie.