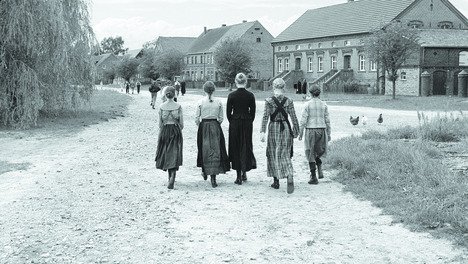 The White Ribbon tells us that

The White Ribbon tells us that, ya know, people can be evil.

Set in a small german village on the eve of the First World War, The White Ribbon is a study of a community facing a wave of mysterious acts of vandalism and brutality.[rssbreak]

A tripwire brings down a galloping horse and sends its rider to the hospital. A mentally challenged youth is abducted and brutally beaten. As a narrator informs us, none of the injured parties has done anything to deserve this it’s as though the violence has just erupted out of thin air.

This is par for the course for Michael Haneke, really. In film after film, he confronts us with moral and ethical challenges. How far would you go to protect your sociopathic child? What would you do if someone started sending you surveillance videotapes? Should we root for the nice nuclear family or the psychopaths holding them hostage at their summer cottage?

Sometimes it works really well. Benny’s Video and Caché are two of the most powerful psychological thrillers I’ve ever seen, and Code Unknown and Time Of The Wolf are each great in their own way.

These thought experiments are presented with chilly intellectual detachment, the better to make Haneke’s visceral plot twists punch through the ironic insulation of his imagined bourgeois audience, jaded after years of lesser art house efforts.

But in The White Ribbon, even more than in his redundant American remake of his own Funny Games, Haneke’s concept slides into empty harangue. The villagers might struggle to understand their situation, but we’re clued in within the first couple of reels. Haneke doesn’t want his audience to miss his point, which is that this outwardly pleasant and well-mannered community is loathsome and rotten inside, its callous cruelty nurturing an evil that will eventually rise up and consume the nation in a little conflict we call World War II.

After that revelation, there’s nowhere for the story to go. Haneke circles his point for a good two hours, having various characters behave respectably in their social circle and monstrously behind closed doors over and over again, until he decides we’ve had enough and rolls the credits.

I’m still not sure why they loved it at Cannes perhaps he refused to unlock the doors until they gave him the Palme d’Or. People are monsters, you know.