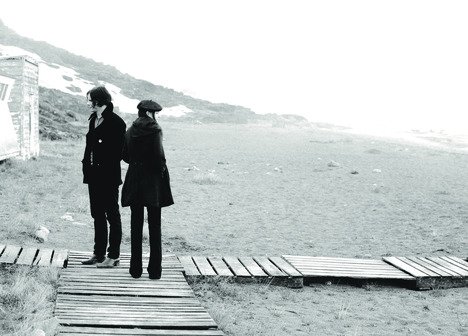 Getting a quick theatrical run before its DVD release next month, The White Stripes Under Great White Northern Lights documents Jack and Meg White’s whirlwind Canadian tour in the summer of 2007.[rssbreak]

The duo played shows in every province and territory, including such unlikely venues as Yellowknife and Iqaluit, and celebrated their 10th anniversary in Glace Bay, Nova Scotia.

Emmett Malloy captures it all in his observant black-and-white documentary, which occasionally shifts to vibrant colour for the muscular concert sequences. It still amazes me that so much sound can come out of just two people.

Fans looking for insight will appreciate the interview in which Jack discusses the artificial constraints he’s set for the band – the red, white and black wardrobe, the distance between instruments onstage – in order to keep himself from getting too comfortable.

But it’s the calm, watchful Meg who gradually pulls the focus from her more outgoing bandmate. So soft-spoken that she has to be subtitled – and that’s when she speaks at all – she becomes more and more intriguing over the course of the movie, hanging back at public events while Jack entertains the crowd and only coming fully to life when she gets behind her drum kit.

Malloy’s attempts to decipher her, and her relationship to Jack, inject drama into the concert-film structure. The result is something unique and fascinating – which also happens to rock awfully hard.