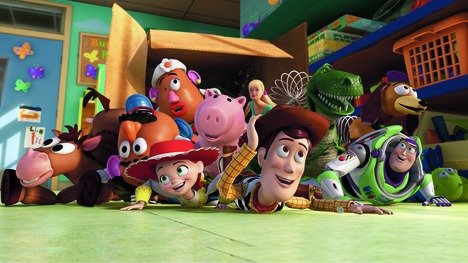 We cant rustle up the enthusiasm we had in the first two films for Woody (centre) and his Toy Story friends.

Maybe Disney shouldn’t have brought the previous Toy Story movies back to the big screen last year. They’re brilliant, and seeing them refurbished and re-rendered in digital 3-D reminded us how much Pixar had expanded the possibilities of computer-generated animation – and of cinema, for that matter.[rssbreak]

Everything you need to know about Pixar is in those movies: story matters, characters come first, technical wizardry is only to be deployed as a means to a narrative end.

There’s a direct line from the silent pathos of Sid’s mutant creations in the first Toy Story to the pantomime expressiveness of WALL*E. Toy Story 2’s climactic baggage-sorting chase leads directly to the hall of doors in Monsters, Inc.

The direct line from Toy Story 2 to Toy Story 3, on the other hand, tracks through Disney’s accountants.

The story finds our heroes facing the end of their usefulness as their owner, Andy, prepares to go off to college. Through the usual series of miscommunications, everybody ends up donated to a daycare centre dominated by a malevolent teddy bear (Ned Beatty in Andy Griffith mode) and must mount an elaborate escape to get back home.

As good as it is to see Woody, Buzz, Jessie and their plastic pals back on the big screen – and to hear the ideally cast voices of Tom Hanks, Tim Allen and Joan Cusack coming out of them – I’m not sure Toy Story 3 has any real reason to exist. It’s not exactly bad, but this is the first Pixar movie that feels unnecessary.

Sure, Cars is kind of a dud, but it feels like the work of someone who fervently believed it needed to be made. Toy Story 3 just sits there, except when it’s actively trying to traumatize its audience.

Yeah, about that. Toy Story 3 has a couple of sequences where director Lee Unkrich and his collaborators seem to be daring one another to up the intensity well past family-audience level. A wind-up cymbal monkey becomes a chittering, pop-eyed nightmare – in 3-D, no less – and a climactic sequence on a conveyor belt toward a junkyard incinerator is a stunningly rendered ride through hell.

The sheer artistry makes it worth watching, even as it sends the wee ones shrieking into their mothers’ arms. Pixar remains the state-of-the-art in terms of CG storytelling, and Toy Story 3 has beats, and even entire scenes, that recall the glories of the earlier chapters.

One lovely moment has all the characters silently considering a new challenge, and every one of these collections of pixels suddenly seems more alive and self-aware than, say, Katherine Heigl in Killers. And a bit where Beatty’s heavy tampers with Buzz gives Allen some more fun with nicknames and cocksure Space Ranger attitude.

But there’s also a hollowness, a sense that Buzz, Woody and their friends are just going through the motions. Toy Story 2 happened because the Pixar guys had another story to tell Toy Story 3 is here because someone thought it would be a surefire hit. These characters deserve better, and so do we.