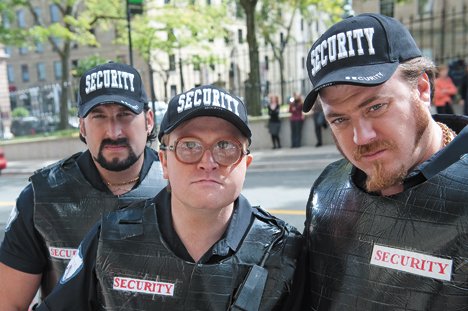 To their credit, director Mike Clattenburg and co-writer Robb Wells have tried to make this venture more cinematic than the first TPB movie, which felt like a bloated episode of the show. Countdown To Liquor Day has a story that works at feature length, tracking the tensions between freshly paroled buddies Julian (John Paul Tremblay) and Ricky (Wells) after Julian decides to go legit and open a body shop.

There’s also some business about Bubbles (Mike Smith) trying to raise enough cash to spring his beloved kitties from the Nova Scotia SPCA, and another subplot that finds the guys’ arch-rival, Mr. Lahey (John Dunsworth), newly sober and grappling with his long-sublimated attraction to sexy, sexy Julian.

Long-time followers of the Sunnyvale crew will be happy just to see these guys back on the screen, but even the fans might wonder where the laughs are this time around. Heads get shaved, stuff gets smashed and drinks get drunk, but nothing has much of a payoff. This feels a lot like a swan song, with everything wrapped up in a nice little package.

Maybe that’s for the best.