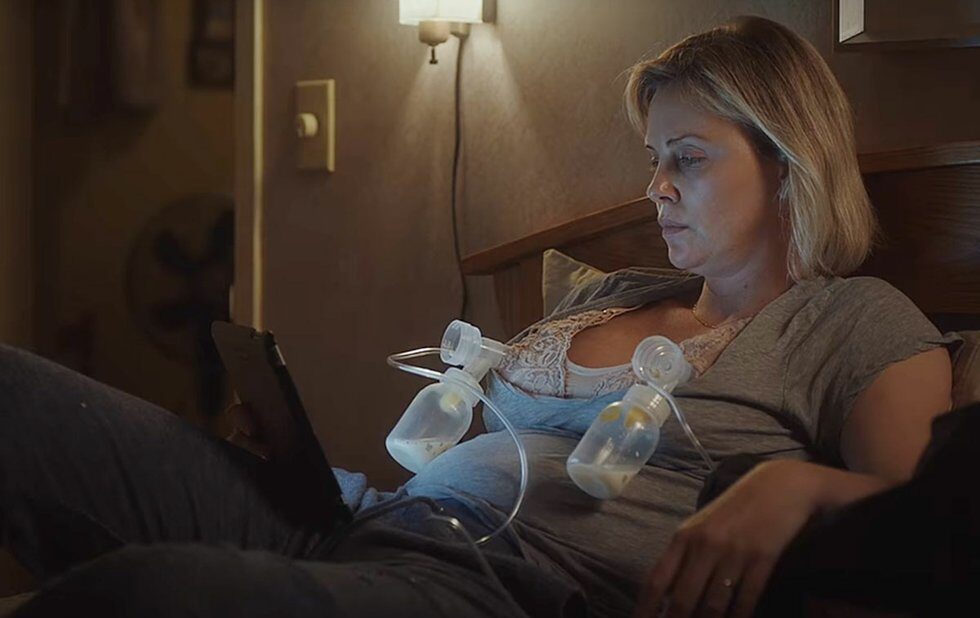 Oh, Tully. You could have been something. You could have been anything, really – a drama about a woman whose post-natal depression is relieved by the arrival of a kind-hearted caregiver, a comedy about an unlikely friendship between a suburban parent and the younger woman she wishes she could be… or even a thriller about a wife who fears being replaced by a stranger, as someone in the film jokingly cautions.

Instead, it’s nothing at all.

Tully reunites director Jason Reitman with screenwriter Diablo Cody and star Charlize Theron, his collaborators on Young Adult. I had issues with that film, which batted a lot of ideas around but never seemed to land any of them… but honestly, Young Adult was a masterwork compared to this.

Well, maybe “masterwork” better applies to Juno, Reitman and Cody’s first picture together. At any rate, Tully does not measure up. It may as well not even exist.

Theron plays Marlo, an exhausted mother in a sleepy little town in upstate New York. Having just delivered her third child, she’s finding it impossible to resume a normal routine.

When Marlo’s wealthy brother Craig (Mark Duplass) offers to hire a “night nanny” to come in and care for the baby while Marlo and her husband, Drew (Ron Livingston), rest, it seems like the perfect solution – especially when the generous, open-hearted Tully (Halt And Catch Fire’s Mackenzie Davis) shows up one night, filled with enough energy and competence for two people.

And then, well, nothing happens. The film is remarkably conflict-free, with Marlo replenished by Tully’s energy and finding herself craving a little more time away from the house. That’s pretty much it, until the movie does something I will only describe as profoundly stupid.

Theron and Davis do everything they can to bring their characters to messy life, and Reitman gives them plenty of space to do it, but Cody’s script never raises itself above room tone, circling the same notion of aging yuppies reinvigorated by a friendship with younger hipsters that Noah Baumbach explored far more thoughtfully in his recent dramedy While We’re Young. Then the script tries to retroactively justify its muddled blandness with a plot twist so tired (and so poorly handled) that it’s basically an insult to a paying audience.

It’s definitely an insult to film critics, who have watched this twist grow stale over the last 19 years and are very, very tired of writing around it.

Honestly, I’d have written this off completely if it weren’t for the actors.