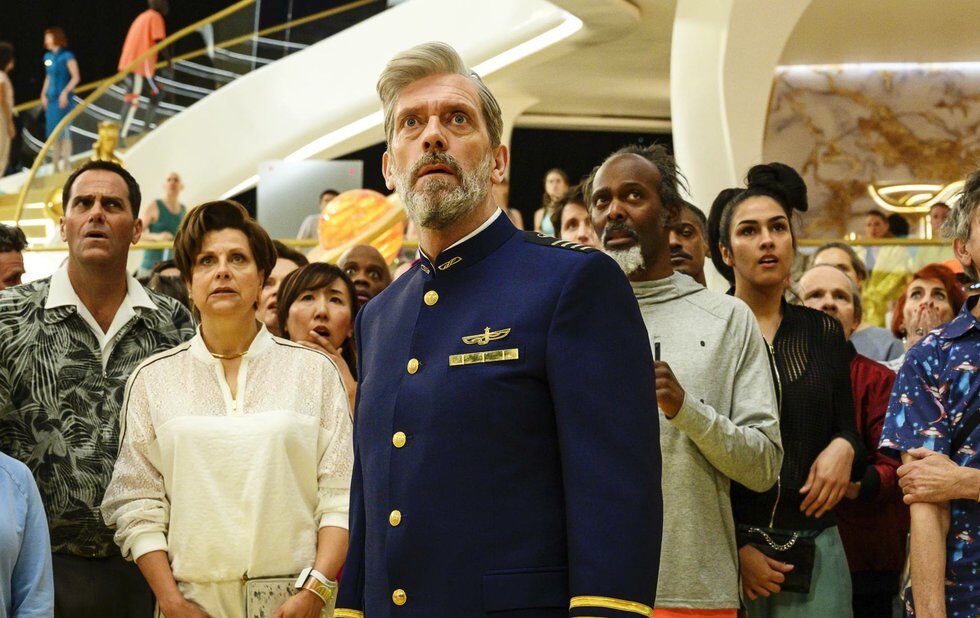 Pella Kagerman and Hugo Lilja’s Aniara, an elegiac drama about the passengers and crew of a disabled space liner making an endless voyage into the unknown, is one of my favourite recent sci-fi movies. I suspect it’s one of Armando Iannucci’s, as well, since his new HBO series Avenue 5 riffs on the same principle, finding gallows humour instead of existential dread. And insults. Plenty of insults.

Set 40 years in the future, when interplanetary tourism is a thing and luxury space liners take passengers on eight-week cruises to Saturn and back, Avenue 5 joins the maiden flight of the eponymous cruiser already in progress, with dashing captain Ryan Clark (Hugh Laurie) and his strikingly attractive crew taking some 3,000 passengers on a trip to the ringed planet.

It’s all going swimmingly. The food court is sublime! There’s yoga on the observation deck! And then the gravity fails for just a few seconds, which knocks the ship off course, and everyone aboard the ship has to face the possibility that they’ll be travelling together for a lot longer than a couple of months.

Fans of Iannucci’s The Thick Of It, Veep and The Death Of Stalin will be delighted to find that his pissy, fractious aesthetic translates very nicely to the sci-fi genre. It may be 2060, but his characters are just irritable, obsessed with status and happy to deliver ornate, tailored insults as any of his past or present-day politicians.

Laurie is all cheery veneer as the overwhelmed Clark, who’s not nearly as put-together as he wants his passengers to believe. Being Human’s Lenora Crichlow is his too-blunt engineer, while Zach Woods builds on his Silicon Valley sad sack as a cruise director who embraces nihilism at the first hint of a crisis.

Frozen’s Josh Gad is their clueless tech-entrepreneur boss – imagine Jack Black playing Elon Musk, and then dial it up a notch – with Dr. Ken’s Suzy Nakamura as his exhausted assistant. Quarry’s Nikki Amuka-Bird is back on Earth in mission control, trying to put a happy face on increasingly unhappy projections.

It’s a workplace comedy set in hell, basically, but the show also takes the time to develop a few key passengers in its first episodes: Jessica St. Clair and Kyle Bornheimer are a divorcing couple on a farewell trip who now find themselves stuck together, and Rebecca Front – a key player in the final seasons of The Thick Of It – turns up as a woman who appoints herself the guests’ advocate. (And yes, a number of British actors are playing American characters, which is something else Iannucci has fun with over the course of the show.)

Given the glee with which Iannucci sets these characters against one another in the first four episodes – and his willingness to make increasingly grim physics jokes – the voyage of the Avenue 5 looks very promising for those of us on this side of the screen.

I expect the characters will start eating each other by season 3, but I’m willing to bet that’ll be played for laughs, too.