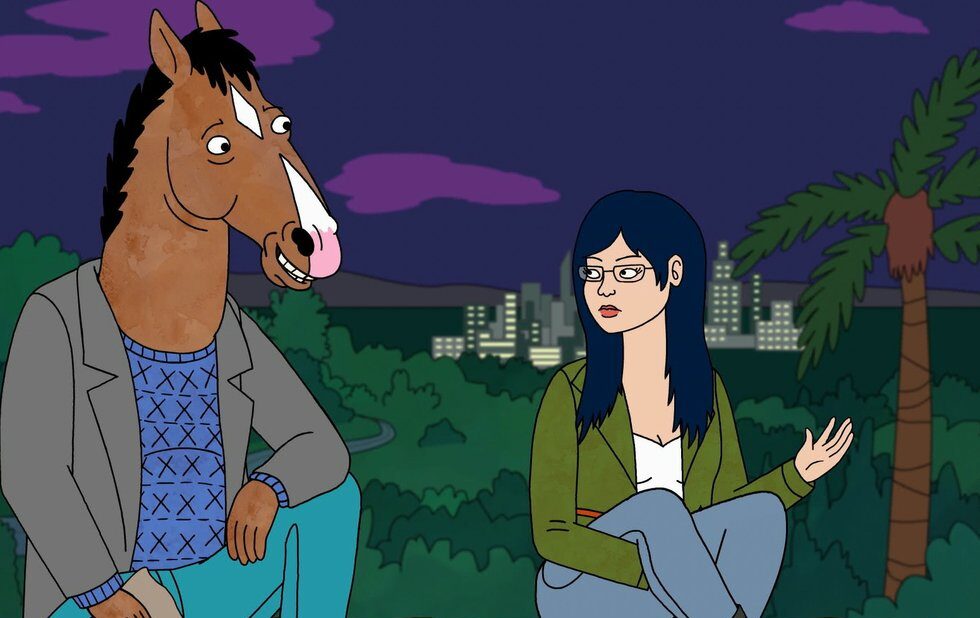 This may be the final season of BoJack Horseman, but it looks to be going out on top.

Raphael Bob-Waksberg’s peerless animated series – starring Will Arnett as the eponymous BoJack, a Hollywood has-been who uses sex, drugs and alcohol to distract himself from the abyss he carries around inside and is also an anthropomorphic horse – continues to mine comedy from the inner lives of showbiz trend-chasers while also considering the toll of an industry built on manipulation and ego.

In this sixth season, which is arriving in two parts of eight episodes apiece, Bob-Waksberg appears ready to deliver on the dramatic promise of his absurdist premise, finally forcing his antihero to reckon with his decades of self-destructive behaviour and understand that no matter how many times he says he wants to be a good person, intentions are meaningless without action.

It’s a heavy load for a cartoon horse to carry, but that’s always been the genius of BoJack Horseman. Designer Lisa Hanawalt’s funny-animal visuals are the ideal avatars for Bob-Waksberg’s punishing insights into human behaviour. If this show was played out in flesh and blood, we wouldn’t be able to look at it.

This season finds BoJack committing to rehab after suffering a psychotic break on the set of his terrible detective show, and even starting to benefit from the process, up to a point: he’s still haunted by guilt over the part he played in the fatal overdose of his former co-star Sarah Lynn (Kristen Schaal). So is the show: the opening credits now incorporate the cosmic tableaux BoJack and Sarah Lynn were watching the night she died, and it turns up within the episodes as well. Something is coming for BoJack, and I have a feeling he won’t be able to sidestep it.

BoJack may be committing to rehab, but he’s nowhere near ready to come to terms with his toxic history. The show is steeped in the knowledge of past bad acts, but it still dares to hope. For BoJack’s recovery, for his social circle to find their own paths to happiness, for the Hollywood community to reckon with the collateral damage of oblivious, empowered A-listers. (The final episode of this cycle is especially perceptive about that, spending half an hour with various incidental characters whose lives were impacted by our flailing antihero.)

As always, Arnett’s remarkable voice performance connects us straight to BoJack’s impatient, demanding soul. The supporting bench expands to welcome Lakeith Stanfield, Paget Brewster and an unrecognizable but hilarious Hilary Swank. The existing characters aren’t neglected, either. As in the previous run, entire episodes are devoted to the lives of the supporting characters, all of whom are fighting their own battles.

BoJack’s agent Princess Carolyn (Amy Sedaris) is trying to cope with the demands of her job, her gender and her new baby cheerfully oblivious Mr. Peanutbutter (Paul F. Tompkins) hopes he can save his clearly doomed relationship with fiancée Pickles (Julia Chan, replacing Hong Chau this season), and BoJack’s soulmate, Diane (Alison Brie), is thinking about starting over in Chicago with a sweet and supportive guy named Guy (Lakeith Stanfield). BoJack’s former housemate Todd (Aaron Paul) continues to fail enthusiastically upwards – at this point the joke isn’t whether he’ll tank his latest business venture, but how he’ll manage to benignly neglect it as it self-destructs.

If none of this makes sense to you, watch BoJack Horseman from the beginning. It’s worth it.

The show is as funny and surprising as it always was, from Princess Carolyn’s habit of spinning herself into tongue-twisting dialogue to the endless animal puns that Bob-Waksberg and his writers’ room – which this year includes Toronto author and cartoonist Jonny Sun – produce.

But still, that darkness: this run ends with the sense of unsustainable damage and a gathering storm. BoJack’s hard-won happiness is probably going to come crashing down in the final eight episodes, which drop in January. However it plays out, I have no doubt that it will stick the landing. After five and a half seasons of perfectly pitched tragicomedy, I’d be stunned if it lost its way now.