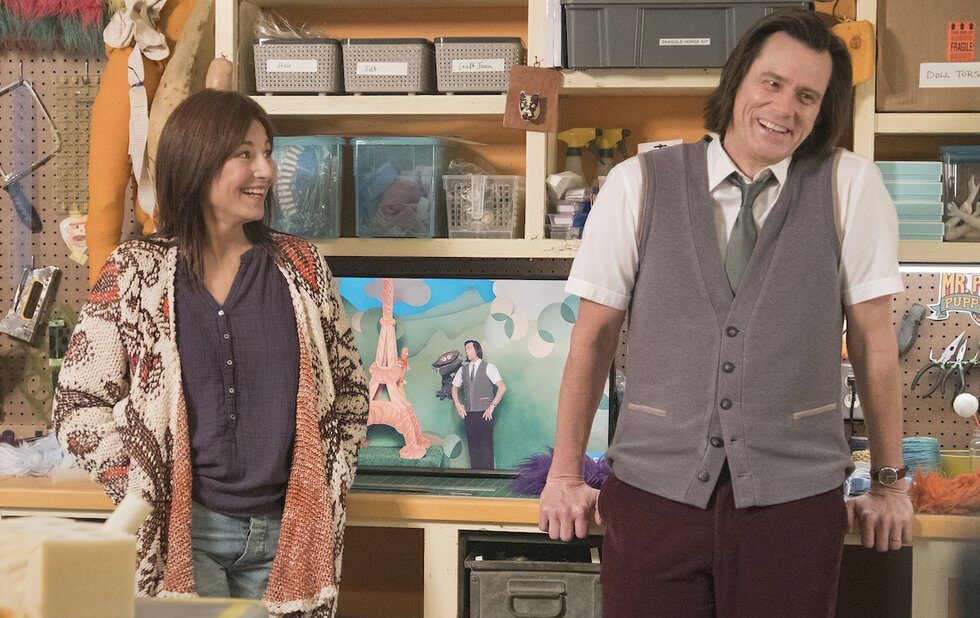 Don’t look for The Eternal Sunshine Of The Spotless Mind in Jim Carrey and Michel Gondry’s new collaboration, Kidding. There’s no Kate Winslet and no Charlie Kaufman, two key ingredients in the alchemy that made the delirious sci-fi relationship drama the best thing each and every one of those players ever made.

But Kidding has its own touching but flighty charms. That much is evident in the first four episodes sent to critics.

The Showtime dramedy series, premiering on CraveTV on September 9, has Carrey playing Jeff Pickles, a Mr. Rogers-type children’s television host who tries to hold the pieces of his life together after losing a child to a car accident.

Jeff is separated but not easily letting go from his wife (Judy Greer), distant from his remaining son (Cole Allen) and gently butting heads with his showrunner dad (Frank Langella), who refuses the host’s attempts to address his heavy personal issues on the Mr. Pickles program.

Holding the centre is Carrey’s clenched-ass-cheeks performance, landing somewhere between his take on Andy Kaufman in Man On The Moon and Tom Hanks’s thing in Forrest Gump. On the one hand Jeff Pickles thrives off the animation Carrey lends the character. On the other, you can’t take the character seriously enough because of that. Maybe a man who is in the most pain of his life but insistent on helping others heal is not meant to make sense – but that gets frustrating.

Jeff is a character who can seem impossibly oblivious when the show wants to find humour in that. And then he makes sharp, deep or even inspiring observations about the human condition. The show’s rather wishy-washy on what he’s meant to be.

It’s more rewarding when it slips away from Jeff and checks in on others, whether they’re regular supporting characters like Catherine Keener as Jeff’s sister, or in it for a minute, like Mary Faber’s recovering addict Macy.

The latter’s story, as brief as it is, benefits from Gondry’s magical touch. Macy’s recovery is depicted in what appears (with CGI assistance) to be a whirlwind single take spinning around her apartment, showing the years go by as colours, furniture and guests keeps changing to mark life’s improvements.

The Gondry touches are highlights in Kidding. They can be sprinkled into the main action or pop-up like complementary asides. If only they could exist more cohesively with everything else in the show.