Jane Fonda and Lily Tomlin are better than ever, but their Netflix dramedy is starting to fall back on millennial pandering 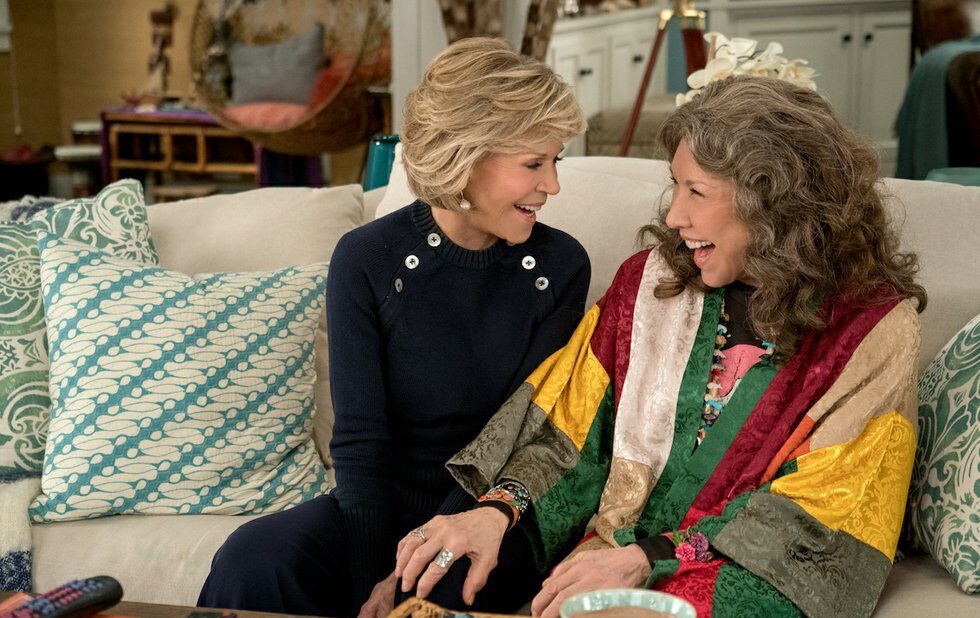 In season four of Netflix’s Grace And Frankie, Jane Fonda and Lily Tomlin’s titular characters seemed to lose some steam and give in to the desires and pressures of those around them. So I was hopeful season five would redeem them.

After watching the first five episodes, I think it has – but there are a couple of other things going on. The show has always been good at dealing with ageing, gender and gay issues, but this season is reaching with the overuse of gay references and slang.

Season five picks up right where season four concludes: with septuagenarian friends Grace (Fonda) and Frankie (Tomlin) sitting on their beach chairs, facing the waves and holding hands. They make a commitment to never doubt each other again. Last season, their four grown children colluded to convince them to sell their La Jolla beach house and move to a retirement community. Now the women are intent on reclaiming the house and their lives, even if their memory loss is more apparent than ever.

RuPaul Andre Charles guest stars as Benjamin Le Day, the assistant to their former home’s new owner, a celebrity who wants to remain anonymous. But his character feels like a Black, gay trope, sassy in tone and posture. Grace greets him with a “hey girl,” and Frankie announces, “I have a gay ex and Black son.” And as Grace and Frankie attempt to convince him to let them keep the house, phrases like “no tea, no shade” slip out of Frankie’s mouth.

So within the first half of the first episode something already feels amiss. Might the dramedy – previously known for smart, meaningful writing about relationships, aging, parenting, queerness and politics – have become too gay?

I wonder if the show is trying to reach younger and more diverse demographics through the use of slang. In a laughable moment, Grace says “PTW” and “PTY” when she means ‘“BTW.” In another scene, Frankie states that it’s “feminist Friday,” followed by “hashtag don’t let me tell you what day it is.”

The anonymous celebrity who’s bought their house turns out to be a pop star named Kareena G (Nicole Richie) who uses phrases like “amaze” and declares that she’s “sick of being told what to do.” It was Benjamin’s idea to buy the house to give her some time away from the spotlight, though she would have preferred the more youthful Santa Fe.

Grace and Frankie’s adventuring with slang is cute but slightly off-putting. They’ve appropriated the vernacular of young people of colour while living in a town removed from an urban centre that lacks both people of colour and a young population. Not to mention that they’ve just returned from a retirement community. And I can’t help but feel a little uncomfortable.

Meanwhile, their ex-husbands –  Robert (Martin Sheen) and Sol (Sam Waterston), who became a couple in season one – present another side of the gay coin. In season four, they opened up their relationship, but within the first few episodes of season five they’ve decided it’s not for them, and neither is the young, toned house guest who was the cause of open relationship discussions.

They are pulled into another married gay couple’s drama, and musical theatre continues to consume Robert. During auditions for the new production, a younger white lesbian incorporates spoken word into her audition. What could be gayer than that? For some of us queers, these gay plot points are obvious to the point of being quite boring. This show used to be very good at subtext.

As Grace and Frankie rebuild their lives, they’re still doing what I’ve always liked most about the show: confronting issues arising from age and gender in a realistic way. They feel invisible when ignored at a fast food restaurant. They’re defiant when it comes to getting their house back, trying the patience their four children.

Despite season five’s flaws, Fonda and Tomlin do not disappoint. The more developed their characters grow and the deeper their friendship, the better Fonda and Tomlin’s performances become. They have really sunk into their roles – both actors so believable and undeniably hilarious.

In one episode, Frankie fights the city on sidewalk crossing times to better accommodate slow walkers. She recruits everyone she knows, plus a few strangers, to support the fight. Why? She wants to cross the street to the snow crab buffet. This story point is a great example of how the show uses humour to highlight situations that are at once meaningful and not so serious. Frankie can do whatever she wants – this is the reward for being an older woman in these times.

By episode five the season seems to be closer to what the show has been: a sharp dramedy about blended family and aging. I hope it settles back into that. It doesn’t need gay stereotypes and pandering to millennials. Grace and Frankie carry it just fine.