TV review: Rev Run’s Netflix sitcom All About The Washingtons is shallow 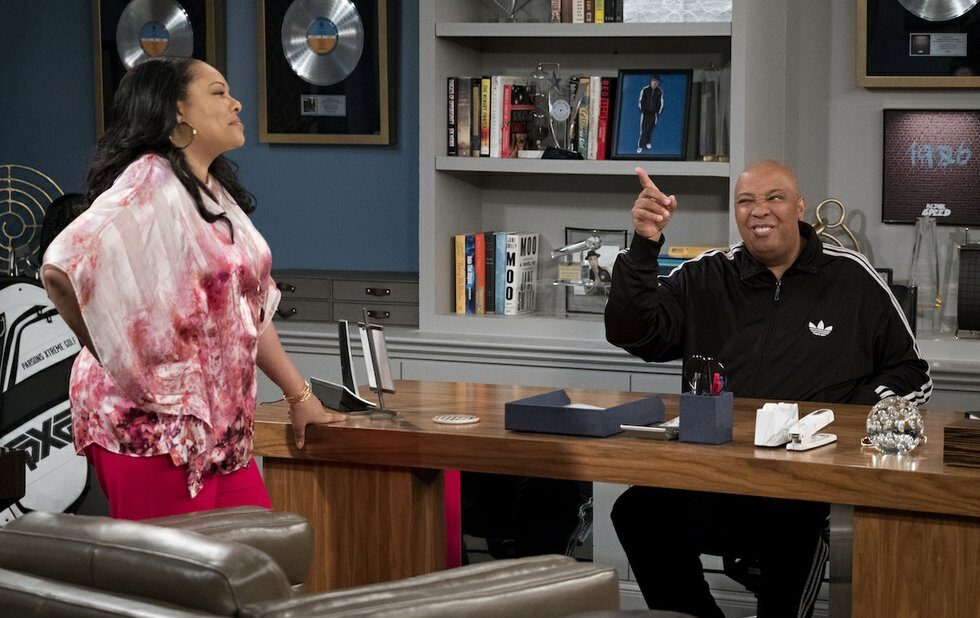 Justine Simmons (left) and Rev Run get fictionalized in the Netflix sitcom All About The Washingtons.

ALL ABOUT THE WASHINGTONS (Jeremy Bronson), 10 episodes streaming on Netflix from August 10. Rating: N

Rev Run’s bold presence in pop-culture has spanned four decades, but his new family sitcom, All About The Washingtons falls flat. What is arguably one of hip-hop’s longest standing royal families, has been compressed to one shallow dimension in this autobiographical sitcom.

MC Joe Speed (Rev Run, aka Joseph Simmons of Run-DMC) is retiring from hip-hop and touring to resume life as Joey Washington: dad and husband. His wife, Justine Washington (Justine Simmons), has been waiting for her turn, and is ready to launch her career as an entrepreneur. Their four kids – two boys and two girls who span age nine to adulthood – seem un-phased by the transition. The show’s main source of tension stems from Justine’s parenting skills trumping Joey’s, because she’s been at it longer.

Loosely based on the Simmons’ real-life blended family of six kids, all of the characters lack depth while the story arcs (in the three episodes sent to critics) offer little to invest in. Eldest Veronica (Kiana Ledé) is a stylish teacher who still lives at home and, although she has a boyfriend, finds herself obsessing over the single father of one of her students. Wesley (Nathan Anderson) wants to be a musician but his vision doesn’t blend with that of his father, who can open doors in the industry. Skyler (Leah Rose Randall) is a very smart child, who, according to Justine, is too emotionally frail to go to school. She is socially stunted, as becomes clear in her private school interviews. Youngest Deavon (Maceo Smedley) is a predictable boy-child who does boy things, like playing basketball in the family’s home court, dealing with a messy room, spending time on iPads and hanging with friends.

There is no tension amongst the siblings, nor between parents and children. They don’t even play the parents off each other, to get what they want, like most kids. It’s all very boring, but perhaps that’s life when you’re rich and can have it all?

Watching All About The Washingtons, I couldn’t help but reminisce over Rev Run’s old MTV reality show Run’s House, featuring the real-life Simmons, who are an interesting and playful family. Rev Run’s wisdom and hilarious commentary are missing in this fictionalized version, as is Justine’s grounding presence and her commitment to the business of her family. Sure, Mrs. Washington may be a touch more feminist, but the fact that she is trying to manufacture and sell bejewelled lids for ladies to use on drinks at the club makes me groan. The Simmons kids came off as driven, stylish, talented and, yes, privileged, but they were relatable and entertaining without sharing too much of their personal lives or indulging in scandal.

Run’s House was also an example of Black love and Black family life rarely seen on TV prior to its debut in 2005. But now we have The Fosters, Black-ish and My Wife And Kids, which are just a few of the shows that tell interesting stories about functional, loving, Black families. So a show that caricatures a pop culture icon and his family is a disappointment.

Skip All About The Washingtons and binge watch Run’s House instead.