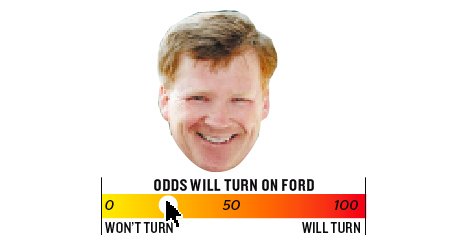 Gary Crawford speaks to reporters outside his office

Gary Crawford speaks to reporters outside his office, April 25, 2013.

Crawford, the new ensemble comedy from Mike Clattenburg and his frequent collaborator Mike ONeill, is similar to Clattenburgs cult smash Trailer Park Boys in that its also a show about eccentric characters played by unquestionably committed comic performers.

I suppose it is also similar in that I did not find it funny like, at all.

Maybe its a style thing. It might simply be that Clattenburg and I have wildly different ideas of entertainment. I couldnt abide his feature film Afghan Luke either.

But Crawford comes with a strong cast and a trio of story consultants whose work I really enjoy Zoe Whittall and Monica Heisey, whove both written for Baroness Von Sketch Show and Schitts Creek, and Kathleen Phillips of Sunnyside and Mr. D so I was happy to screen the three episodes CBC released in advance of the shows streaming debut this week.

(All 12 episodes drop on Friday February 2 the show isnt set to air on TV until the summer, making this an interesting experiment on the distribution side.)

I liked it more than Afghan Luke, anyway.

Crawford is the story of a highly functional dysfunctional family, of which each member has his or her own very specific quirk. Patriarch Owen (John Carroll Lynch) is an ex-cop who uses a smartphone app to speak after an injury his wife, Cynthia (Jill Hennessy), is a high-powered cereal executive in the city. Shes also carrying on some sort of affair with the thoughtful, strapping Bryce (Chad Connell), a relationship that Owen is not only aware of but apparently approves.

Owen and Cynthia have adult children: prodigal son Don (Kyle Mac) is a failed rocker whos returned home to clean himself up and discovers he can talk to raccoons his sister Wendy (Sunnysides Alice Moran) is the responsible straight-arrow and kid brother Brian (Daniel Davis Yang) is a would-be entrepreneur whose defining trait is that hes prematurely balding.

Did you catch the thing about the raccoons? Over the first three episodes, it turns out that Don can talk to trash pandas, or at least they can understand him, which gives Brian the idea to launch a pest-control business built on rented town cars and plastic laundry baskets and again, if theres an actual joke in there, I am not seeing it.

Its the same with Cynthias cereal career. Three episodes in, all we know is that shes having trouble coming up with a new concept, and that someone on the show thinks that the cereal industry is inherently funny. But… well, is it? Are raccoons funny? Theyre adorable, especially the kits, but a quarter of the way through the season they havent done anything. No one has.

Theres one authentic moment between Brian and the beleaguered principal (Kelly McCormack) of a vermin-infested high school, but it doesnt really amount to anything it just happens and slips away.

So much of Crawford is like that, with gifted actors reaching for clarity and the show not knowing what to do with real feeling and never delivering the laughs it so desperately needs. Maybe all these half-formed notions snap together later in the series, but whod stick around long enough to find out?