Set this season in 1986 Las Vegas, Liz Flahive and Carly Mensch’s show about women wrestlers draws on our emotional investment into its rich characters 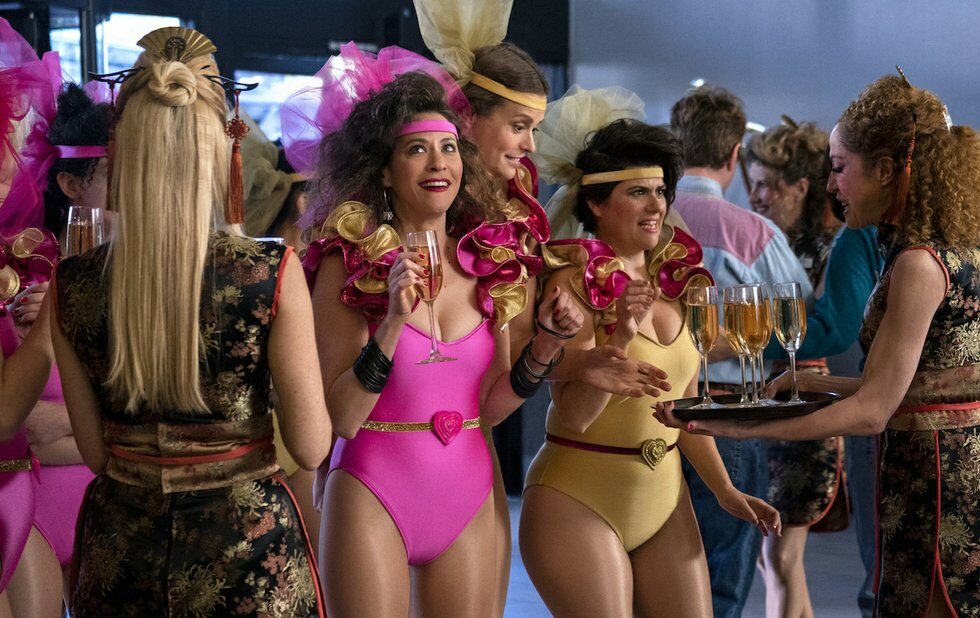 There are three kinds of period pieces in television. One runs on pure nostalgia, like Stranger Things – a narrative built on references that doesn’t really do anything with them beyond trotting them out for a dopamine hit: “What if Stephen King, but Steven Spielberg?”

Then there’s the Mad Men or Marvelous Mrs. Maisel model, where a creator situates the story at a specific point in time to highlight its (inevitably) regressive politics, perspectives and social mores. It’s good for storytelling, I guess, though it always strikes me as self-limiting if your characters exist to push against the limitations of a given era, they can never really win, can they?

And then there are shows like GLOW, which plop us into the not-so-distant past, reproducing it as thoroughly as possible, because that’s where the story is. In GLOW’s case, that’s the mid 80s – the slick, skanky, coke-stained era that produced televised women’s wrestling. It doesn’t criticize the era it just exists there.

In its first two seasons, GLOW was mostly a comedy, albeit a particularly sharp and canny one. Creators Liz Flahive and Carly Mensch had a ball recreating the texture of Reagan-era Los Angeles, and building backstories for the (fictional) misfits who came together to create the Gorgeous Ladies Of Wrestling.

The show itself was cheesy as hell, populated by stereotypical characters like the all-American Liberty Belle (aka Debbie) and her scheming Soviet rival, Zoya The Destroyer (aka Ruth). But we got to understand the actors who played them: former soap star Debbie (Betty Gilpin) and struggling method actor Ruth (Alison Brie), whose friendship was shattered in the pilot when it was revealed Ruth was sleeping with Debbie’s shiftless husband Mark (Rich Sommer).

Their sublimated rage expressed itself in the ring, which in turn inspired hack director Sam Sylvia (Marc Maron) to build his show around them, and eventually Debbie and Ruth reached an understanding. In the second season, GLOW realized how rich its supporting bench was, and responded with a run of subplots that illuminated the lives of Kia Stevens’s Tammé, Sunita Mani’s Arthie, Gayle Rankin’s Sheila, Sydelle Noel’s Cherry and Chris Lowell’s Bash. And then, in a season-ending cliffhanger, the show fell apart due to legal wrangling over the rights… and came back together again with a casino residency in Las Vegas.

Something else started to happen in that second season. The period references started to fall away, and GLOW’s tone shifted more towards the dramatic. There were still jokes, but they came from the characters instead of the situation we’d spent enough time with Ruth, Debbie and their colleagues to laugh with them, rather than at them. The stakes might be fake, but the wrestlers were real.

And now GLOW is in its third season, and it’s almost a straight drama. It’s still got a wild, comic energy – and a sarcastic snap whenever Maron’s Sam slouches into frame – but this year, Flahive and Mensch are counting on the viewers’ emotional investment in the characters, rather than their curiosity about what shiny gadget or movie poster might appear in the background of a scene. It’s initially surprising – and then sort of amazing – to realize how well we’ve come to know these people.

Dropping in and out of the Gorgeous Ladies’ lives over the course of 1986, this season builds on the theme of identity teased last year, when Tammé and Arthie reckoned with the racist nature of their characters Welfare Queen and Beirut.

Tammé and Arthie are still struggling – Tammé physically, Arthie emotionally – and when everybody switches roles for a night, the wrestlers are forced to think about how their friends perceive them in the ring. This leads to an absolutely killer mini-arc for Ellen Wong, whose Jenny Chey is horrified to see her Fortune Cookie character reinterpreted by her best friend Melanie (Jackie Tohn) – a shock that doesn’t just go away at the end of the episode, either.

Jenny’s not the only one struggling. Bash is still closeted, and handling it very badly – having married Rhonda (Kate Nash) at the end of last season, he’s lashing out at anyone or anything that questions the front he’s built for himself, while still being powerfully attracted to men. Worse, he genuinely loves Rhonda, and blames himself for failing her as a husband.

For someone who was introduced as a walking ATM for Sam’s show, it’s remarkable how three-dimensional Bash has become. And as GLOW continues to explore the devastation the AIDS epidemic is wreaking on America’s queer community, Bash’s identity crisis feels even more tragic. Another new character, Kevin Cahoon’s drag performer Bobby Barnes, becomes invaluable to this storyline as it builds over the course of the season.

GLOW’s also confident enough in the strength of its ensemble that the core trio of Debbie, Ruth and Sam can be separated for long stretches. Debbie worries her responsibilities as a co-producer on the Vegas show are keeping her away from her toddler in Los Angeles – a situation that lets Gilpin introduce a rich new vein of anxiety and frustration for Debbie as she bonds with casino manager and former showgirl Sandy Devereaux St. Clair (Geena Davis, her warm-but-steely delivery as welcome as ever). And in another thread, Ruth and Sam spend an awkward day on the strip that forces the pair to finally define their relationship to one another, and not necessarily in the healthiest way.

I’m not entirely sure this subplot works – it seems to push against the rapport Brie and Maron have built for these characters over the years – but it resonates through the rest of the season, and combined with some other stuff that Sam goes through it does give them both some interesting new notes to play. (Brie also makes her directorial debut this season, with an episode that focuses largely on Sam and his daughter Justine she’s got chops.)

And if it’s the one note that doesn’t quite ring true in a season filled with complex, daring choices… well, at this point I trust Flahive and Mensch to figure it all out for Season 4. Perhaps as insurance against Netflix’s current trend of cancelling female-fronted series, they’ve packed the season finale with cliffhangers just begging to be resolved.