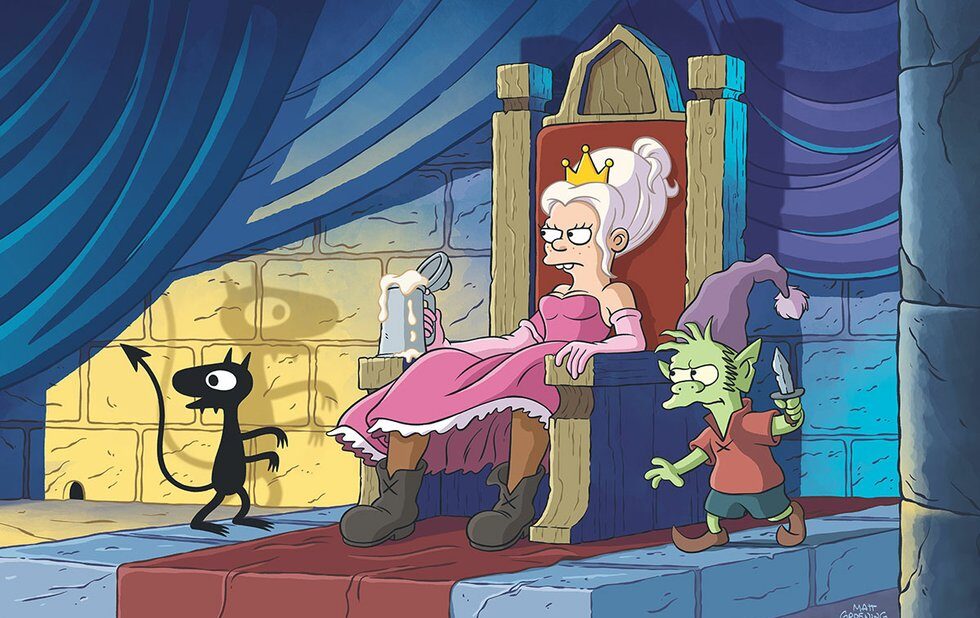 Matt Groening created The Simpsons and Futurama, so Matt Groening gets to do whatever he wants for the rest of his life. Thats only fair.

For his first new project in almost 20 years, Matt Groening has made a Netflix series called Disenchantment, set in a fantasy wonderland where a frequently drunken princess (voiced by Broad Citys Abbi Jacobson) falls ass-backward into adventures, usually accompanied by her elf pal Elfo (Nat Faxon) and her personal demon Luci (Eric Andre).

And the result is exactly what happens when a beloved creator gets to do whatever he wants, with no one nudging him to maybe spend a little more time on the script, or suggest that hes been down this road before.

In fairness, Disenchantment isnt a disaster on the level of George Lucass Star Wars prequels or Peter Jacksons Hobbit movies. Its just a faded photocopy of Futurama, with Princess Bean slotted into the role of cranky but competent Leela, Elfo as the enthusiastic doofus Fry and Luci as cheerful chaos agent Bender. And its set in something like the past instead of the future, which clearly feels like enough of a distinction for Groening and fellow executive producer David X. Cohen, who worked on both shows.

But the thing about making a show thats so similar to Futurama is that we already have years and years of Futurama, which was so much sharper and funnier out of the gate. The constraints of network TV made every minute count yeah, early episodes of The Simpsons feel sluggish by comparison to the seasons that followed, but they were still paced quickly enough to keep the audience watching.

Disenchantment feels saggy in a different way the first episode runs over half an hour, with every scene rolling on a little longer than it should. The subsequent six episodes clock in around 27 or 28 minutes, and feel tighter, but the rhythms are still off Groening and Cohen are writing to act breaks that no longer exist, and so the shows pace appears to surge and ebb at random. (Its different from watching broadcast television uninterrupted by commercials at least that allows for a pause of two or three seconds of black where the ads used to be.)

The pacing isnt the only thing about Disenchantment thats not quite right. The look of the show made a lot more sense once I discovered it was originally designed as a sequel to The Simpsons Movie that would been a Lord Of The Rings/Game Of Thrones parody. It also explains the pervasive sense of laziness yes, Elfo was originally designed as an elf version of Bart Simpson. But once the show became its own thing, wouldnt it make more sense to, you know, make him not look like that?

A lot of Disenchantment is like that: relationships that built out of pieces of The Simpsons and Futurama, plots and situations that feel like they were found in a box of scraps from previous writers rooms.

The most innovative and interesting element is the musical score, perhaps because its composed by Mark Mothersbaugh rather than Danny Elfman this time around, and performed exclusively on acoustic instruments because the people of Dreamland dont have amps.

Because its Groening, I watched all seven of the episodes that were made available in advance. And because Jacobson, Faxon and Andre have a pleasant chemistry, eventually I started to enjoy Disenchantment as a silly hangout show albeit one set in a world I have very little patience for.

The universe of Dreamland is pretty limited in scope, populated mostly by narcissistic kings, vainglorious knights and pissy wizards. Supporting players John DiMaggio, Tress MacNeille and Maurice LaMarche voice their characters as variations of their Futurama work, which is clearly what theyve been asked to do but is also a disappointing reminder that Disenchantment isnt interested in doing anything else.

I cant fault Groening for doing what he likes to do, and Im sure Disenchantment will be embraced by fans eager to see more of his buck-toothed, pop-eyed heroes bumbling around. But I was hoping for something with the same anarchic spark as his other shows. Or at least one thats aware the spark is gone, and willing to do something else instead. Thats the real disenchantment, I suppose.