NOW MagazineMovies & TVReviewsTV review: Dead To Me takes the elements of Big Little Lies and produces something unsatisfying

TV review: Dead To Me takes the elements of Big Little Lies and produces something unsatisfying

Christina Applegate and Linda Cardellini have a great time playing friends who meet at a grief support group, but the satirical potential is undermined by predictable twists 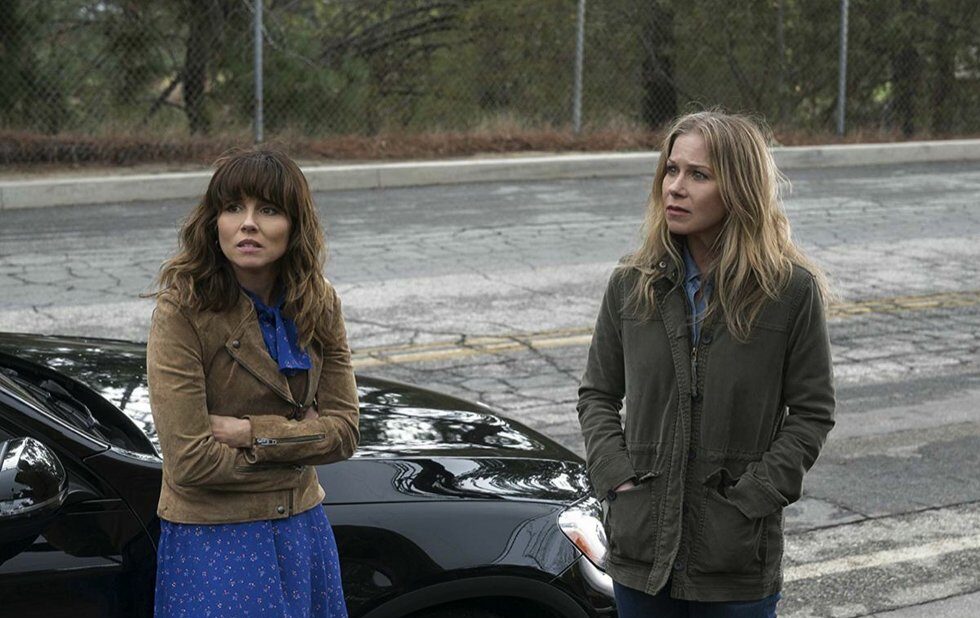 DEAD TO ME (Liz Feldman). All 10 episodes streaming Friday (May 3) on Netflix. Rating: NN

On the one hand, Dead To Me is a pretty watchable show. It’s powered by gifted, appealing actors, it has an engaging visual style and its master narrative is organized as a series of minor cliffhangers that’ll keep people mashing the “next episode” button as soon as it appears. The episodes are only 30 minutes, so you can binge the whole thing in five hours. It goes down easy.

On the other hand, it’s not actually good. It could have been, and at least once an episode Dead To Me sort of cracks open to hint at a better show rather than what you’d get if you ran Big Little Lies through the same proprietary algorithm that told director Cary Fukunaga how to shape last year’s event series Maniac.

They hit it off, and Jen invites Judy to stay in her guest house, which used to be her late husband’s studio. It’s nice to have another adult around to check in on Jen’s two boys, and it also takes Jen’s mind off the search for the car that ran her husband down three months earlier. But by the end of the first episode, we know that Judy is keeping at least two secrets, one of which is directly related to Jen.

That’s not a spoiler so much as the obligatory final flourish that every pilot needs to make sure the viewer returns for episode two – and it’s one you can see coming from the very first moment writer/producer Liz Feldman puts her two leads together, because Dead To Me is just that kind of show. Its shocking twists are decidedly un-shocking everything about the show’s language points us toward them not being the thing that’s about happen, so of course they’re going to happen.

Honestly, the show’s so strangely obvious about its plotting that I found myself wondering whether Feldman created the series as a full-on satire of this sort of series, then had to adjust it over the course of production to play as a straight drama with comic elements. Netflix is marketing it as a dark comedy, which is… inaccurate.

Still, that theory would explain a lot, most immediately why Applegate, Cardellini and James Marsden – who plays Judy’s on-and-off ex, a squirrelly finance bro named Steve – don’t always seem to be acting in the same show from one scene to the next.

Applegate and Cardellini are a pleasure to watch in their scenes together, quickly establishing a simpatico vibe that persists throughout the series. Jen and Judy are comfortable in each other’s presence, and even amused by each other in a way we don’t often see on TV shows. It’s a warm, affectionate chemistry, and it’ll be enough for some viewers to overlook Dead To Me’s rather glaring storytelling deficiencies, or the tonal whiplash that comes from having fun banter undercut by a tinkly, glossy musical score.

Indeed, Applegate and Cardellini are having such a good time together that they turn a largely disposable digression into the show’s single best sequence. In the fourth episode, Jen and Judy visit a restaurant to investigate a mysterious connection to Jen’s dead husband, only to get distracted by the frustratingly vague international theme of the place. The tension of expected confrontation falls away as Applegate and Cardellini keep squinting at their menus, sounding out the weird names of the dishes as though there’s some secret inside. (“Should we get the Macho Nachos or the Arab Spring Rolls?”)

Once Olivia Macklin turns up as a clueless server named Bambi, the stakes go up, the laughs develop a melancholy edge and Dead To Me finds the groove it’s been chasing all along: a hangout series with a grim undertow about women who can see the world for what it is, and wish they had the luxury of ignoring it. But it can’t stay there the next episode spirits Jen and Judy away to a lush grief retreat in Palm Springs, and we never see Bambi again.

We do get to see a lot of Marsden’s Steve, who is the series’ most inconsistently written character – but then he has to be, in order to set up what happens in the final act. Marsden does everything he can to make the character work from moment to moment: he sells the comic posturing of the would-be alpha male, and he and Cardellini find the credible, exhausted chemistry of people who’ve overstayed their welcome in one another’s hearts. But Dead To Me doesn’t have any room for that level of complexity, even though it’s supposed to be all about it.

What Dead To Me is really about is keeping you watching from one episode to the next, surrounding Judy’s big secrets with a bunch of other, smaller, less important ones that just serve to fill out the episode order, or give secondary characters like Judy’s cop boyfriend (Brandon Scott, giving far more than the role deserves) something to puzzle over at the end of a scene.

I kept waiting for those smaller secrets to clarify into something meaningful – or at least build tension as Feldman and her writers (among them Paper Year’s gifted Rebecca Addelman) ready their final twists – but they never do. Ed Asner has a recurring role as a watchful resident at the senior’s home where Judy works. That never really amounts to much, either.

It’s a frustrating experience. And at a point in time when shows like Killing Eve and Barry arrive with their respective mixtures of laughs, thrills and style perfectly balanced out of the gate, it’d be unfair to call Dead To Me anything other than a misfire.