SHES GOTTA HAVE IT premiering on Netflix on November 23. Rating: NNIn 1986, Spike Lee stepped over second-wave feminism. To. 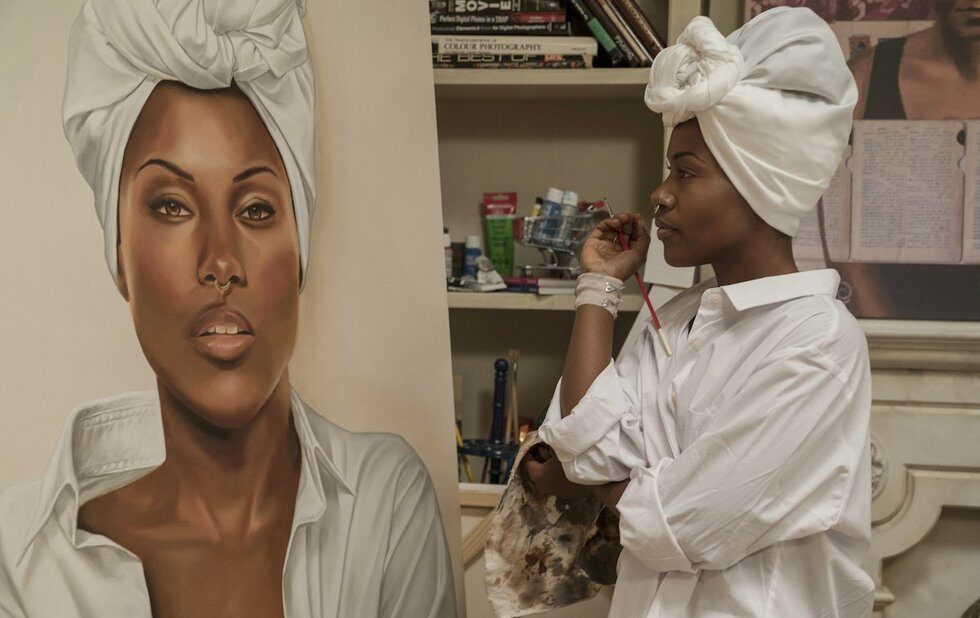 SHES GOTTA HAVE IT premiering on Netflix on November 23. Rating: NN

In 1986, Spike Lee stepped over second-wave feminism. To the movements assertion that women could have it all marriage, kids and career he got on the bullhorn with an even bolder statement: Shes Gotta Have It.

But as the director is set to premiere a 10-episode Netflix series based on his breakthrough feature film debut, the question for us Black women is: do we still want it?

The It of Lees black-and-white feature fancied itself to be non-normative. The movie focused on Nola Darling, a young, sexually liberated Brooklynite juggling three men without apology: the buttoned-up Jamie Overstreet, the vainglorious Greer Childs and the man-child Mars Blackmon.

In a plot development that Lee himself later regretted, Nola is raped by one of her suitors. We see her self-assured sexuality violently stripped away, and she responds by vowing monogamy and entering into a celibacy pact with her rapist, a type of power dynamic (which, in the films closing moments, she, too, regrets) that rests on the very patriarchal power structure the film set itself up to subvert.

Throughout his career, Lee has been criticized for treating his female characters as mere props to elucidate his major themes, and Shes Gotta Have It is a prime example. The film didnt do Black women, already starved for multi-faceted film and TV representation, any favours.

Fast-forward to 2017. Black women are still starved for representation, but now weve got a few more options. There are TV series that centralize Black womens experience, such as Issa Raes Insecure or Michaela Coels Chewing Gum. They are shows that not only affirm our complex ways of thinking and being, but do so within a society that constantly relegates us to one-dimension.

Within this context, Spike Lees revamped Nola, played by newcomer DeWanda Wise, asserts herself as a sex-positive, polyamorous, pansexual. Shes set clear boundaries between the three men, and one woman, who want her exclusively, but Nolas desire is to make her professional ambitions as an artist her number-one priority.

In the first episode, a stranger sexually harasses Nola while shes walking home at night, leading her to artistically explore the ways in which women of colour are devalued. The assaults impact on her, however, trails off after one episode. The shows main concern continues to be the romantic juggling act.

Nola is an artist, though her struggle to pay the rent in her massive brownstone apartment in the racially and economically diverse but not gentrification-adverse Brooklyn neighbourhood Fort Greene never seems real.

Theres little about Shes Gotta Have It that actually appears real. Lee, who directed the entire first season, endows his characters with an exaggerated realism, the kind of self-conscious auteur style that characterizes a lot of his oeuvre. On display are many of his signatures: the floating dolly shot, montages of Brooklyn and its residents, and characters talking into the camera.

Lee has used those style elements successfully in past films, most notably in the 2000 satire Bamboozled. Taking his audience beyond the filmic fourth wall invites reflection on the issues hes interrogating: movies are not a form of escapism under his lens.

Over an entire series, though, the emphasis on style winds up turning his characters into caricatures.

It does make for a beautiful and vibrantly shot series, one as bold as the artwork Nola makes. But it comes at the sacrifice of character development.

Wise does what she can to make Nola relatable the actor is magnetic in the role. But the character is flat, Lees mouthpiece for larger social and cultural commentary (one self-indulgent scene finds her arguing that Denzel Washington should have won the Oscar for Lees 1992 film Malcolm X).

When she does talk about herself either to the camera or to her therapist (played by The Bodyguard stage actor and singer Heather Headley) Nola cant seem to think past her own needs or the effect her actions have on those she hurts (which she does often).

The latter comes to matter very little though, since the supporting characters are also cutouts. Their over-over-exaggerated mannerisms miss the mark on the satire Lee is clearly aiming for. Instead, he lands them into the realm of buffoonery.

A subplot with Nolas friend, Shemekka Epps (Chyna Layne), an aspiring nightclub dancer who resorts to back-alley butt injections to further her career, offers a promise of complexity. Shemekka calls out her friends, including Nola, for body-shaming her while simultaneously finding herself vulnerable to the commodification of Black womens bodies. (Enter Lees references to Nicki Minaj and the fictional reality game show She A$$ed For It.)

But the butt she winds up with, and the process she goes through to get it, is played for comedy, undermining the characters journey.

In a shocking scene mid-season, Shemekka has a grotesque accident (or a$$ident to give you an idea of what it involves without giving it away) that lands her in the hospital. Its confusing as to whether Lee is painting an empathic character or simply using her to make a point about the dangers of butt augmentation, because up until that moment she had been the literal and figurative butt of a joke.

In many ways, Shes Gotta Have It is making the case that you cant pin down Black womanhood. Yes, we Black women know this to be true. Theres nothing new there.

But the series vision of Black womanhood is so barely developed. Moreover, among the new crop of Black women-led series, its not even necessary.