TV review: Star Trek: Discovery caters to the cultural moment in all the wrong ways 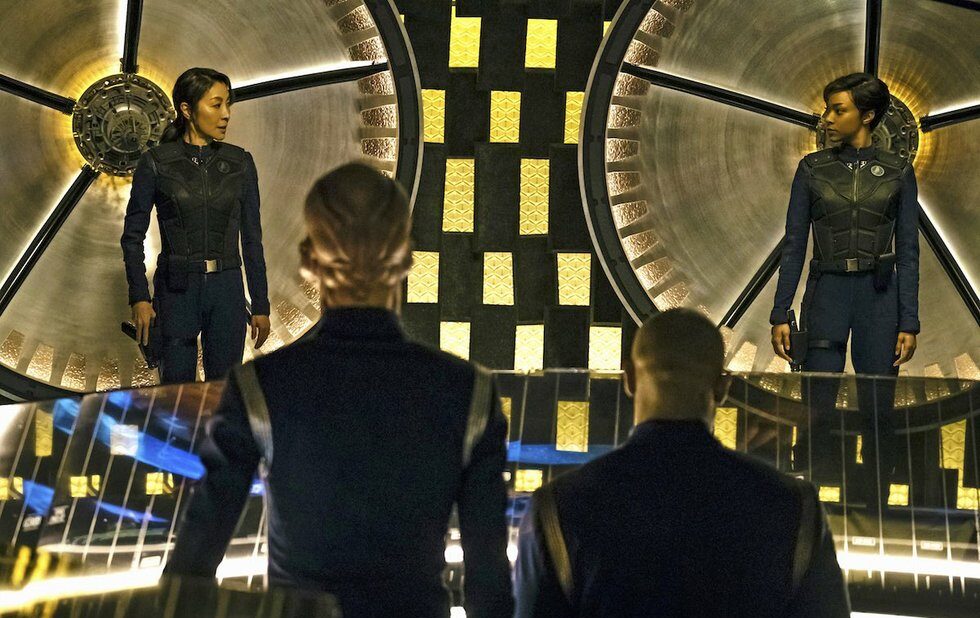 STAR TREK: DISCOVERY airing Sundays on CTV and Space and available on CraveTV.  Rating for the first two episodes: NN

There are two different shows in Star Trek: Discovery. One of them might be something, if it makes it out.

That’s the show about Michael Burnham, the first officer on the USS Shenzhou, whose drive to explore and investigate winds up putting the United Federation of Planets on the brink of war with the Klingon Empire.

Played by Sonequa Martin-Green (formerly of The Walking Dead), Burnham is a complex, intelligent and headstrong character, and she’s immediately engaging as the central character of the first Trek TV series in 12 years. A human woman raised by Vulcans, Burnham has found a unique perspective on that species’ devotion to logic: she believes emotions are necessary to logical thinking, rather than a detriment, making her the most interesting thing to happen to the Vulcan mythology since J.J. Abrams decided to make Vulcans refugees by blowing up the planet in his 2009 feature-film reboot.

Oh, right: Discovery takes place in the franchise’s original timeline, roughly a decade before William Shatner’s James T. Kirk captains the Enterprise, and two episodes in I have no idea why that matters.

Anyway. Burnham ended up with the Vulcans after her parents were killed in a Klingon attack on a human-Vulcan science outpost, which might explain why she’s absolutely the wrong person to end up exploring a beacon at the edge of space that turns out to be an elaborate Klingon trap for any Federation exploratory vessel unlucky enough to detect it.

Panicked by the possibility of engagement with the galaxy’s premiere warrior species, Burnham makes a series of dangerous decisions to save her ship – even betraying her captain and mentor Philippa Georgiou (Michelle Yeoh) – and winds up giving the Klingons exactly what they wanted, a pretense for galactic war.

That’s a really interesting backstory for a character, and the reason I’ve spent so much space explaining it is that Discovery devotes two full episodes to telling it. The proper series, the one set aboard a different starship (the eponymous U.S.S. Discovery, commanded by Jason Isaacs’s Gabriel Lorca), hasn’t actually started yet, and that brings us to the other show within Star Trek: Discovery.

The other show feels like a version of Star Trek designed to cater to the immediate cultural moment in all the wrong ways. It wants to reshape the property into something more contemporary, filled with conflict and tension and darkness – and maybe to ride the coattails of Game Of Thrones by delving into the roots of Klingon culture, Dothraki-style. Turns out they’re racial purists and religious fanatics, which certainly ties into the here and now, but you don’t need to spend more than five minutes explaining that.

While I appreciate that TV Trek grew stiff and insular over the last few shows – the last show, Enterprise, spent four years mired in an increasingly incomprehensible master plot about an invasion from the future, short-changing the characters in the process – this feels like the wrong kind of fan service. Giving a third of the first two episodes over to Klingon characters who speak their (subtitled) dialogue in a slow, tortured cadence while standing very still in a large meeting chamber just takes the wind out of Discovery’s sails their plan’s not terribly complicated, and the amount of time they spend yelling about it just feels like padding.

That’s not my only problem with Discovery. There’s also the weird focus on how expensive everything looks, as though the series is trying to compete with the new Trek movies rather than the other shows. Everything is elaborate and gee-whizzy, which is nice at first – there’s no reason a show about the future can’t take pleasure in its production design – but then it just doesn’t stop, directors David Semel and Adam Kane crowding the frame with more and more detail until we’re overwhelmed. Giant battle cruisers, busy viewscreens, hordes of starships, spacesuit helmets so crowded with data displays that we can barely see an actor’s face – yes, it’s nifty tech, but more often than not it’s just in the way.

I suspect the producers are trying to compete with the high-velocity pacing of Abrams’s movies, where the action moves so breathlessly that we’re carried along on the adventure. But those were movies, self-contained narratives that began and ended in a single sitting – and as much as the people behind Star Trek: Discovery insist that they’ve made a 15-hour movie, that’s not the case. It’s a serialized drama playing out over several months, and we’re supposed to be interested in coming back every week. By ending the pilot where they do – with the Shenzhou in pieces and Burnham court-martialed and sentenced to life in a Federation prison, which is obviously not where the show is going – the producers have effectively just wasted the first two hours on their equivalent of Kirk’s Kobayashi Maru story.

Yes, the encounter with the Klingons is a defining piece of the character’s history, and the setup for a larger test down the line. But it could easily be related in five lines of dialogue, with maybe a couple of flashbacks to the most crucial moments. We didn’t have to watch the whole damn thing.

Really, though? I’d have been fine with watching the whole damn thing had the producers made it work. I refer to “the producers” rather than co-creator Bryan Fuller, who left the project in pre-production to focus on his other big TV project, American Gods. Whether he quit or was removed is a topic of some contention, and I have a feeling he didn’t go happily. I’m also willing to bet that his show would have been less busy and more focused on Burnham, because everything else he’s ever created – Wonderfalls, Dead Like Me, Pushing Daisies, the brilliant Hannibal – has been character-driven with a distinct perspective.

And really, that’s what’s missing from Star Trek: Discovery: a distinct perspective. Whatever the issue was with Fuller’s vision, the producers haven’t replaced it with anything. There’s a void in the centre of the show.

Two hours in, I don’t know what Discovery is supposed to be, or where it wants to go. I’ll keep watching, because Martin-Green is great and I’m curious to see how the series reframes itself for the proper narrative – the one with Lorca and a new crew featuring actors like Anthony Rapp, Maulik Pancholy and Mary Wiseman. (It appears Doug Jones, who plays the Shenzhou’s perpetually nervous Lieutenant Saru, will also be back that’s good, he was fun.)

But I’ll be honest: I haven’t got much patience for another Klingon war council, and I’m worried the producers aren’t done with those. That set looked really expensive.