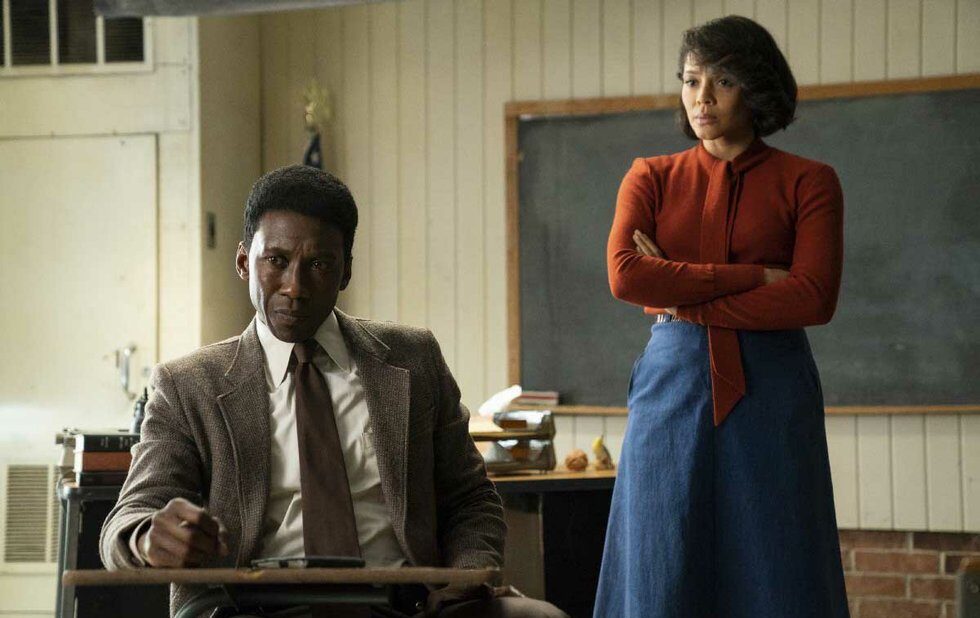 Actor Carmen Ejogo says the third True Detective season, in which she stars, is the most ambitious and deeply personal for series creator Nic Pizzolatto, and quite possibly his finest.

During my interview with the actor, she hinted at stuff I knew nothing about. Critics have only been sent five episodes in the eight-part season and Ejogo explains that after spinning wheels between whodunit and personal drama, the season truly reveals itself in the final two.

I look forward to finding out what she’s getting at. But for now, I’m stuck in the confused fog this show is comfortable reveling in, where the mystery about missing children hangs almost like a persistently frustrating distraction from the compelling characters circling it.

Performances have always been the key to the series, and season three doesn’t disappoint, with a commanding and layered showcase for Mahershala Ali. His detective, Wayne Hays, is a Vietnam vet, smothering the traumas from his past while working an investigation that creates new ones.

Ejogo plays Wayne’s wife Amelia, a schoolteacher who becomes a novelist documenting the very case that haunts her husband. The complexities in their relationship – how they love and torment each other – is where the show really takes hold. The mystery at the centre gets more fascinating when this couple wields it as currency in their marriage.

As with season one, the latest True Detective serpentines its way between three timelines. In 1980, two siblings disappear from their broken small town Arkansas home. Ali’s Wayne and his doggedly loyal partner, Roland (Stephen Dorff), get to work searching for the kids and whoever took them. In 1990, a break in the case brings Wayne back into a fold he had long left behind. And in 2015, Wayne is now a senior with a slippery memory, still trying to latch onto the unsolved mystery.

The gradations in Ali’s performance over the 35-year timeline are fascinating. His Wayne is fairly tight-lipped in the earlier years, not just to stay professional but also to keep his emotions and trauma tucked away. But in his later, gentler years, he desperately tries to tap into the very emotions and memories he once bottled up.

He’s struggling with his own mind while revisiting the still-unsolved case with a true crime TV show interviewer Elisa (Toronto’s Sarah Gadon), who brings up all the theories and evidence Google and online conspiracy forums have provided.

At one point Elisa tells the aged Wayne how she’s “interested in the intersectionality of marginalized groups within authoritarian and systemic racist structures.” The tired reaction she gets from Wayne makes for a good laugh, but that moment hits on another aspect that makes True Detective tick.

While it’s not the story’s crux, Wayne being a Black cop in the U.S. South adds texture to both the narrative and Ali’s performance. Micro aggressions from racist hicks create subtle fissures in Wayne’s stone-cold demeanor, as if he feels an itch from an allergic reaction. Whenever colleagues ignore his insights or suggestions, his disappointment registers as routine. What elicits the most strain in his eyes is when he has to engage fellow marginalized groups – and being a Black cop further complicates things.

So when the older Wayne hears from an enthusiastically woke white TV personality about the racist structures he faced, he shrugs it off. Not because she’s wrong, but perhaps because her educated wording doesn’t speak to the visceral experiences he’s routinely buried. In his old age, he’s done with all that.

He’s also eager to take another crack at that whodunit, which, surprisingly for a show called True Detective, is the least interesting thing about this season.