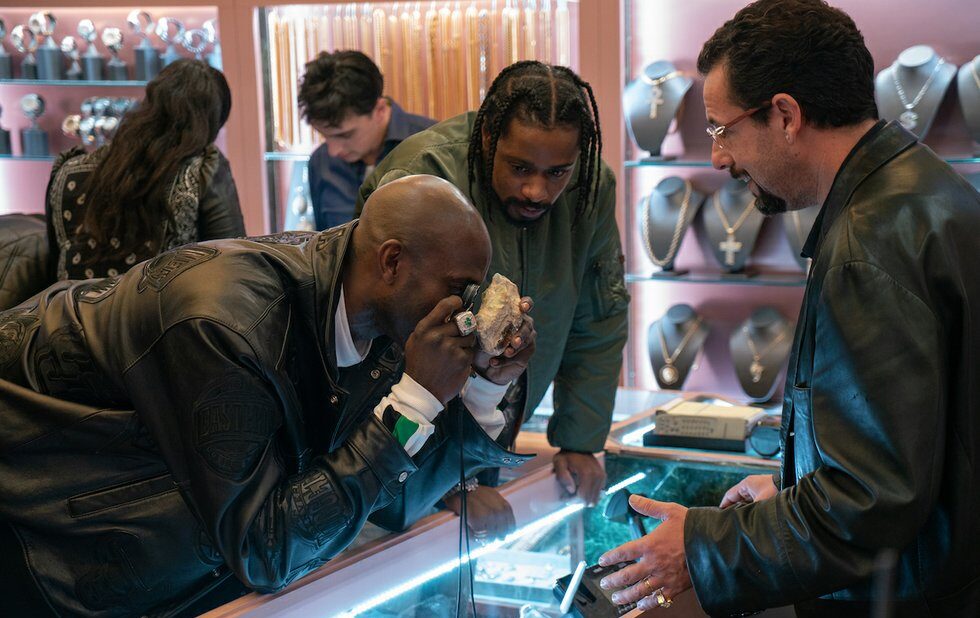 With the addiction drama Heaven Knows What and the crime thriller Good Time, sibling filmmakers Josh and Benny Safdie have announced themselves as the heirs to John Cassavetes and Martin Scorsese. The latter even serves as executive producer on the Safdie brothers’ latest nerve-racking thriller, Uncut Gems, my favourite film of the year.

Adam Sandler rises up once again from whatever soul-sucking lucrative shtick he’s peddling to remind us how talented he is and how much work he’s willing to put into the right role. In Diamond District jeweller Howard Ratner, Sandler found the perfect opportunity to exploit his manic energy and wily charms but also dig deep for something darker.

Howard is addicted to risk. He’s already neck-deep in debt to a loan shark and a few others, but he can’t help but keep piling on big bets in multiple directions.

The action begins when basketball star Kevin Garnett (playing himself) arrives in Howard’s shop thanks to a wily middle man (Lakeith Stanfield) who really just wants to hustle fake Rolexes. At the same time, Howard receives what he estimates to be a million-dollar opal that he had smuggled from an Ethiopian mine to put up for auction.

He lends the opal to Garnett, who sees some mystical powers in it. As collateral, Garnett lends Howard his championship ring. Howard puts up the championship ring as collateral at another jeweller for cash, which he subsequently uses to bet on Garnett’s performance in that night’s game.

This, mind you, is only the first act, and shit spirals out from there in perfectly orchestrated chaos. What’s more impressive than how the Safdies build up and sustain the jitters and anxiety for over two hours is how precise every sight and sound is in the seemingly out-of-control environment. They can have three to four high-intensity arguments happening at once, weaving mayhem with such skill that you won’t even notice how coherent it all is. Instead, you’ll take the credit for keeping up.

You’ll also want to keep track of how Howard keeps money moving in circles, which is both head-spinning and telling. Throughout the movie, he looks for ways to double down, usually off the labour of Black men, whether they be in an Ethiopian mine or the NBA. The Safdies are white male directors who are also savvy observers of race and economics.

Even The Weeknd (also playing himself) gets burned in his brief appearance in Howard’s orbit. The character is a selfish mess, but also one that earns our affection in surprising ways.

Both the movie and Howard are like that opal, a misshapen rock formation that could look gritty and ugly from one angle, shine brilliantly from another and then mesmerize when leaning in close. The closer you get, the more these gems cut right to your soul.