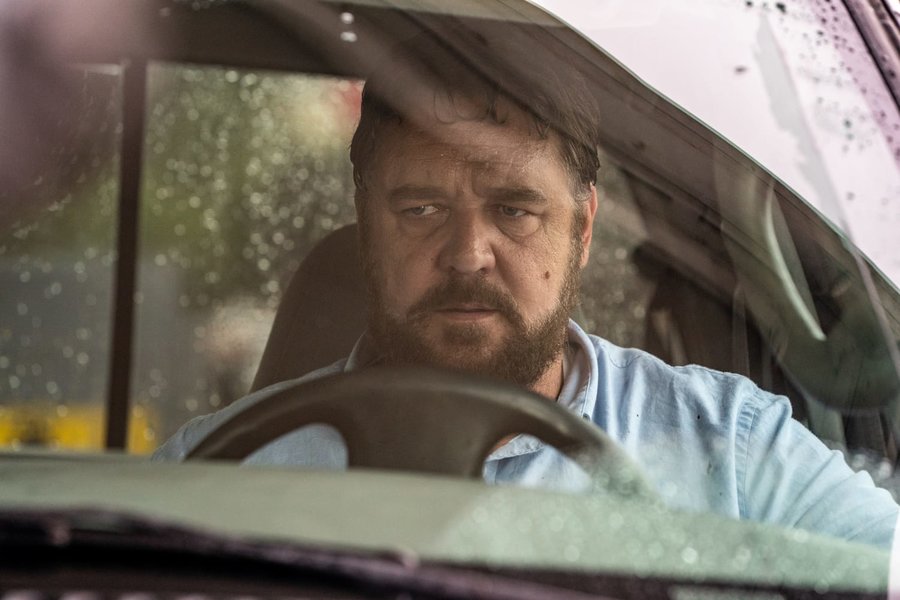 Unhinged is a movie about an overworked mom who honks at the wrong car on a freeway off-ramp, and brings hell down upon herself and her family. The poster tells the whole story: Russell Crowe Is Unhinged.

There will be critics who try very hard to find rich undercurrents of commentary about white male rage and entitlement in Unhinged, in much the way people said the same thing about Joel Schumacher’s Falling Down nearly 30 years ago (which sent another Oscar-winning actor on a rampage). But the commentary will come to nothing, because the movie doesn’t really care about any of that. Like Falling Down, Unhinged is really just a movie about a guy looking for things to wreck.

Here, it’s Rachel Flynn (Caren Pistorius) who is trying to keep her life together after a difficult separation. She’s driving her son Kyle (Gabriel Bateman) to school – and running late – when she gets stuck behind a big grey pickup at green light. She honks at him, hard, before giving up and passing him.

A couple of blocks later, the driver catches up to her and apologizes for his lack of consideration, asking her to do the same. She was inconsiderate too, see, with all the honking. She refuses, and he chooses to show her what “a really bad day” looks like – which, as he sees it, involves having your family and friends stalked, tortured and murdered.

So it’s not really a Falling Down riff, which had Michael Douglas’s dead-eyed salaryman wandering across Los Angeles deliberately picking fights with everyone and anyone he could blame for his own failings. This time, it’s personal: Unhinged owes a lot more to vehicular cat-and-mouse pictures like Duel or Breakdown or Joy Ride.

The script was written by Carl Ellsworth, who gave us the pulpy pleasures of Red Eye and Disturbia before moving to more by-the-numbers work on remakes of The Last House On The Left and Red Dawn. He’s efficient, but he’s not a hack: everything that happens in Unhinged is more or less credible, other than a little bit of unlikely physical resilience in the climax. (In fairness, this is a movie.) Most of the choices Rachel makes seem appropriate for a massively stressed person in her situation: she calls 911 as soon as she can, for instance, and the strategies she deploys are all pretty smart.

It’s just that The Man is evil, you see, with the rage and stamina that powers all movie villains: he exists only to stalk and destroy and mow down every supporting character within reach. Like Rutger Hauer in The Hitcher, he’s death personified, although unlike Hauer he’s neither stylish nor terribly self-aware.

Crowe’s performance is intentionally unpleasant, which if I’m being honest is a little disappointing. The actor’s mercurial volatility can make him an exciting, unpredictable heavy when he turns it on – as he has in everything from Virtuosity to Les Miserables –  but Crowe’s barely making an effort. He dulls his eyes, sags his body and growls his lines, initially affecting a Southern accent but then abandoning it. (If that was a character choice, we’re never led to understand why.)

Worse, director Derrick Borte undermines his star’s performance with a prologue that shows us exactly what sort of person The Man is, and the violence he’s willing to commit, which means there are no surprises to be found in Crowe’s performance, just surly, nihilistic menace. He’s sadistic in everything he does, but he’s not getting anything out of it, which makes him easy to write off as a character. There’s nothing to explore.

Seriously, at a couple of points in Unhinged I actually found myself thinking “huh, Mel Gibson would have been perfect for this,” so don’t let anyone tell you 2020 has run out of twists. Sure would have been nice if the movie had found room for some, though. But nope: “Russell Crowe is Unhinged” is the pitch, and that’s all it cares to sell.