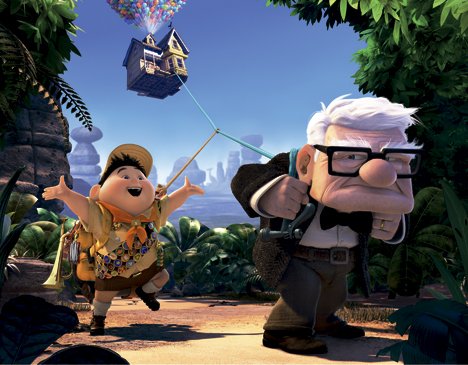 Russell (voiced by Jordan Nagai) and Carl (Ed Asner) are Up to lots of good in Pixars first 3-D flick.

UP directed by Pete Docter, written by Bob Peterson and Docter, with the voices of Ed Asner, Jordan Nagai, Christopher Plummer and Peterson. A Walt Disney Pictures release. 89 minutes. Opens Friday (May 29). For venues and times, see Movies. Rating: NNNNN

I’m already on record as having wept like a grandmother through most of WALL*E last year, and, yes, my lower lip trembles a little during the Sarah McLachlan song in Toy Story 2. I’m not exactly proud of this.

And now, with Up, director Pete Docter – whose Monsters, Inc. closes with a grace note that reduces me to a quivering mess every time – has perfected the use of computer-generated animation as an emotional torture mechanism. And it’s available in 3-D, for crying out loud.

I should back up a little.

Up is lovely and inventive and energetic and fun, and once again finds Pixar redefining the state of the digital art, using pixels and data points to tell a story as rich and human as anything you’ll see in a theatre this year.

Up charts the adventure of a 78-year-old retired balloon salesman named Carl Fredricksen (voiced by Ed Asner) who contrives to fly his quaint little house from the USA to the primeval South American jungle of Paradise Falls in order to fulfill a promise he’d made to his beloved wife, Ellie.

Yeah, about that. Carl is a widower – and in a truly heartbreaking opening montage, we see how he ended up that way. After that, it takes the movie a while to take off again when it does, it’s thanks largely to the companions Carl acquires on his journey, including an enthusiastic young Junior Wilderness Explorer named Russell (Jordan Nagai) and the best movie dog since Bruno in The Triplets Of Belleville. (His name is Dug, he loves you and he is about 17 kinds of wonderful.)

Beyond the gorgeous visuals, what distinguishes Up from any other grumpy-old-man story is the fact that it never, ever forgets that Carl’s anger and misery come from a real, raw place of bereavement and helplessness.

Which just makes it all the more ecstatic when the adventure really gets going, with Carl encountering a demented old explorer (Christopher Plummer), an elusive giant bird called Kevin and many more dogs.

Once all of that is in place, Docter and his crew let loose a torrent of all the stuff Pixar does best: antic mayhem, impossibly complex chase sequences, thrilling last-ditch rescues and so forth.

It’s the sort of thing the studio can do in sleep mode, and it’s entirely satisfying kids will thrill to it, and adults, too. But it’s what’s happening on a parallel track to all the action – an old man stirring to new possibilities – that gives Up real emotional ballast.