Review: Vivarium is a surrealist thriller that really hits home 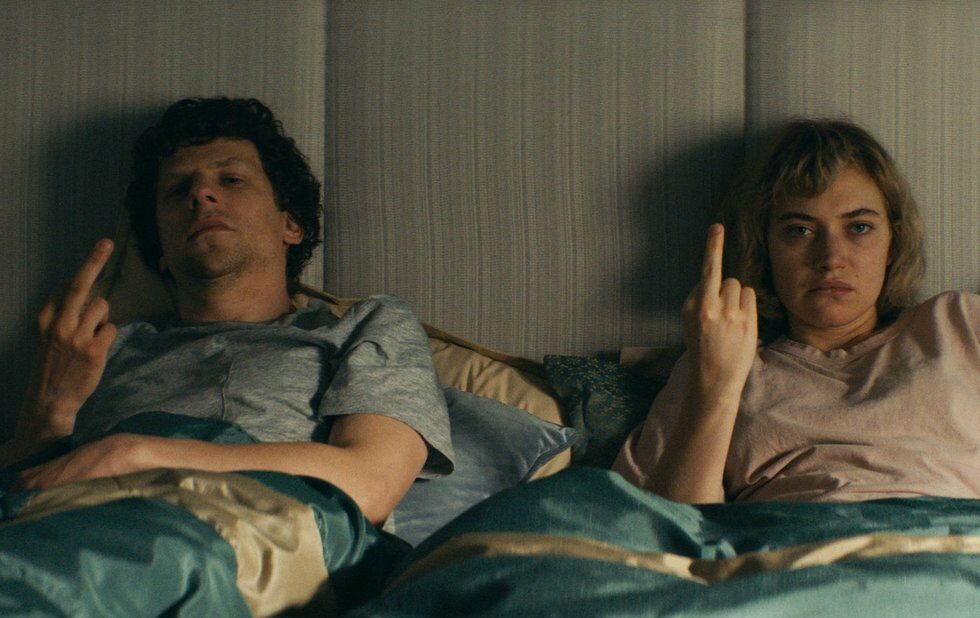 Vivarium was originally scheduled to open in theatres this week, but of course that’s no longer possible.

So Mongrel Media is releasing Lorcan Finnegan’s surrealistic thriller directly to digital – which means those of us who want to watch a movie about a young couple unwillingly trapped together in a perfectly pleasant little house now have no option but to watch it while we’re trapped in our own spaces.

I choose to appreciate the irony. Your mileage may vary.

In fairness, Vivarium is arriving at either the best or the worst possible time. On the one hand, Finnegan’s existential creeper feels very much of the moment on the other, does that sound like anything you’d like to watch right now?

Imogen Poots and Jesse Eisenberg – who co-starred in last year’s wobbly The Art Of Self-Defense – play Gemma and Tom, prospective homeowners who drive out to a sprawling new housing development and find themselves unable to leave. Every route they try, whether by car or on foot, leads them back to the same starter home. Food and beverages are delivered by unseen hands eventually that mysterious service delivers a baby, with cryptic instructions to “raise him and be released.”

Teacher Gemma does her best to tend to the unnatural child, while landscaper Tom becomes obsessed with digging a hole in the front yard to see what lies beneath the development. And that’s essentially the movie, which draws a pretty clear allegory for the trap of comfortable suburban living – and in so doing, frequently feels like a Black Mirror episode stretched out to feature length.

Vivarium doesn’t make its conceit as visceral – or push its audience’s boundaries – in the same way as Galder Gaztelu-Urrutia’s Netflix nightmare The Platform, which makes it feel a little less-than by comparison. I should note that the films are crafting very different strains of horror Gaztelu-Urrutia is chasing a sort of non-stop grindhouse high, while Finnegan and screenwriter Garret Shanley are more interested in an atmosphere of unsettling, oppressive dread.

Eisenberg settles into his familiar “focused, angry” mode, which is what his role requires, while Poots – who’s almost always the best thing about any movie in which she appears, most recently Castle In The Ground and Mobile Homes – crafts a much more complex performance out of Gemma’s plight.

She manages to carry the film through its patchier sequences – though there’s nothing she can do when it comes to the ending.