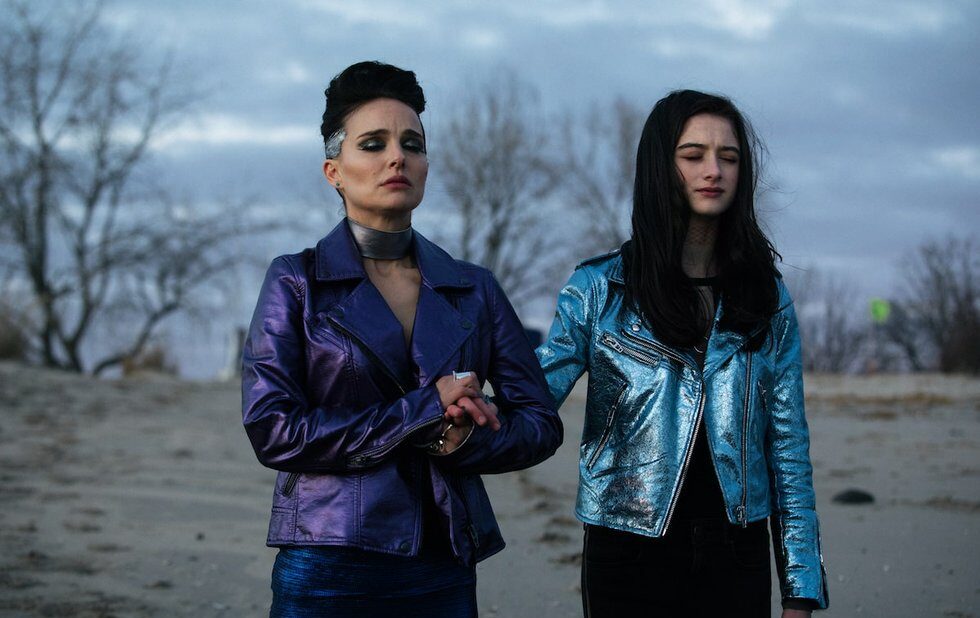 Pop music is often positioned as escapist entertainment, but what exactly does it mean to provide escapism for people when you have a lot you are trying to escape from? Director Brady Corbet’s second film gets into that seeming contradiction in a film about the ways violent events become entwined in pop culture narratives, and the hermetic world of fame.

Vox Lux stars Natalie Portman as Celeste, a singer who rocketed up the charts shortly after surviving a mass shooting as a teen. The first half finds young Celeste (Raffey Cassidy) moving forward from trauma to focus on her career, aided by her songwriting sister (Stacy Martin) and manager (Jude Law). The second part catches up with 31-year-old Celeste (Portman), who now has a teen daughter (also Cassidy), is in a state of arrested development and is barely holding her career together. This part takes place in a hotel over the course of a single afternoon leading up to a tour kick-off.

Corbet’s style is brisk and ostentatious, evoking gritty 70s actioners one moment and Todd Haynesesque golden-era romance homages the next. The unpredictable visual and musical flourishes (Scott Walker and Sia did the soundtrack) make it thrilling to take in, but it settles into a more focused pacing in the second act as we tail a heavily Long Island-accented Portman around the hotel.

Her accent is among the heavy-handed elements (also: news footage of September 11th, condescending narration by Willem Dafoe) that simultaneously belabour Vox Lux’s themes but also push it in manic, comic and confrontational directions. In other words, it’s mesmerizing, not unlike pop music itself.

Portman’s tornado of antipathy and anger is captivating, but it all melts away in the final concert sequence. Various dramas might be raging around her, but music still provides fleeting stability. The movie culminates in a shot that perfectly expresses the inoculating power of pop music.