NowMagazineMovies & TVReviewsReview: Walking On Water peeks into the world of artist Christo

Review: Walking On Water peeks into the world of artist Christo 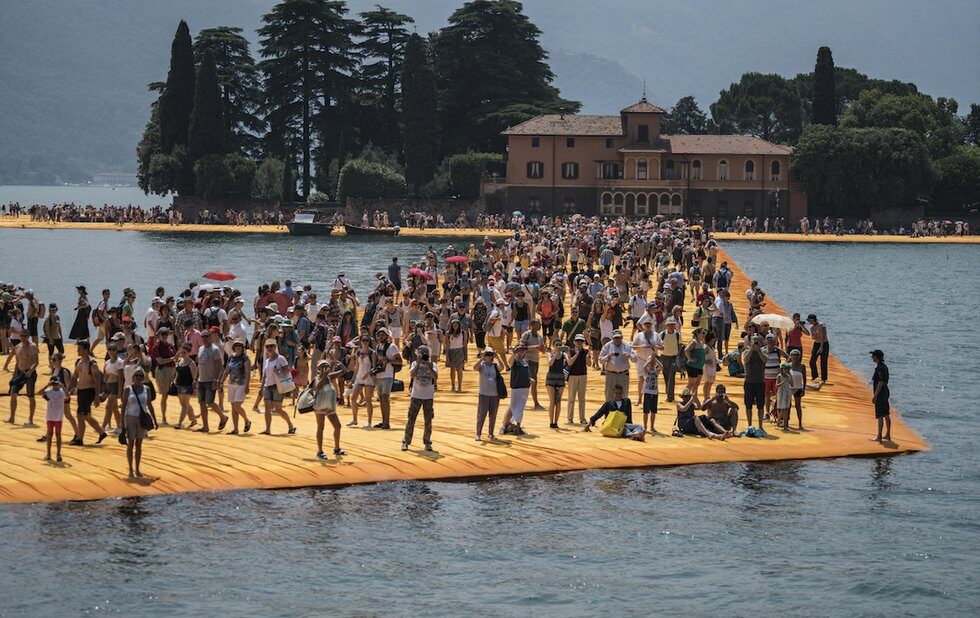 Bulgarian art star Christo is best known for wrapping buildings, bridges and landscapes in fabric with his collaborator wife, the late Jeanne-Claude. For this fly-on-the-wall doc, director Andrey Paounov edited together footage the octogenarian artist and his team shot over several weeks in 2016 as they brought a long-unrealized project to life: a site-specific, three-kilometre network of saffron-coloured floating piers on Lake Iseo, at the foot of the Italian Alps.

Already the subject of five documentaries by the Maysles Brothers, Christo (who’s full name is Christo Vladimirov Javacheff) is an entertaining, unfiltered personality. In an early scene, we see him struggle to connect to a Skype call and then argue with his assistants about the size of a catalogue. There is a lot of shouting, smirking and sighing, and the meeting seems only vaguely productive. He’s gruff, to say the least (“Christo does not sit. He stands,” an assistant curtly informs an event producer), but also patient and doggedly focused.

The artist doesn’t offer lofty explanations for his work. He has said in interviews that his art is purely aesthetic and Paounov’s simple vérité approach avoids grandiose interpretation. There’s a montage of Christo chatting up the project to various people and a scene in which he explains it to a class of New York City school kids. The Floating Piers, he explains, is all about conveying the unique feeling for visitors something  fleeting, a perspective that they wouldn’t otherwise have on the landscape.

And it’s free. Christo doesn’t work on commission but self-funds  everything to ensure he has complete creative control and the result is publicly accessible. Walking On Water is an intimate  and unvarnished chronicle of the kind of behind-the-scenes drama and work that goes into building and then managing this kind of large-scale, free public installation.

Christo finances his work through sales of his paintings. In the film’s most manic scene, a buyer in a business suit seems to go temporarily insane when confronted with the USD $250,000 price for a tiny painting. Once the Floating Piers are open, Christo attends a garden party and is inundated by starry-eyed rich people, including Galen Weston’s son-in-law. He spends little more than a few seconds with each fawning VIP – face-time with collectors is another necessity to keep the public installation free.

The best sequences go from tense to comic to sublime. We watch as his team deals with wind and rain while installing the fabric on the system of 200,000 high-density polyethylene cubes that make up the piers, and then goes into damage-control mode when hundreds of thousands of tourists arrive by the busload in the first few days (officials initially expected only 50,000 visitors over 16 days).

All of this energy culminates in Christo finally drinking it all in. Paounov saves the sweeping views of the piers for the third act, capturing panoramic views from the air as Christo flies over the piers in a helicopter. It makes you wonder what could be possible if our cities invested more in this kind of temporary work and what might happen if we had a chance to view familiar sights in a new light.

The sequence is emblematic of Walking On Water’s insular approach, which sticks steadfastly to Christo’s point of view to make the film a roller-coaster experience. It entertains with great access to its subject, but doesn’t probe the work to deeply.