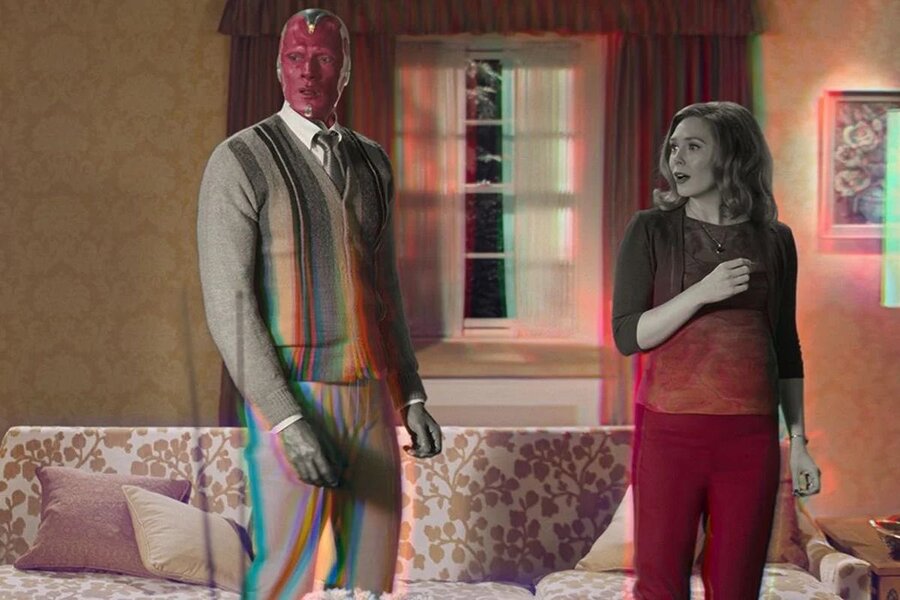 I’m having a hell of a time figuring out how to write about WandaVision. The first television project from Marvel Studios since the company ended its relationship with Netflix a couple of years back – and, thanks to the pandemic, the first Marvel anything since Spider-Man: Far From Home opened in July 2019 – is, to say the least, a radical departure from Marvel’s house style.

As rooted in classic television sitcoms as it is in the world of S.H.I.E.L.D. and Wakanda, WandaVision is the brainchild of screenwriter Jac Schaeffer and director Matt Shankman, who kick off the series by boxing the widescreen, brightly coloured Marvel Studios logo into the squarish, black-and-white dimensions of Golden Age television – and compressing the booming Dolby Digital fanfare into tinny mono sound.

The peppy credit sequence that follows drops us into 50s America, as Wanda Maximoff (Elizabeth Olsen) and her husband Vision (Paul Bettany) move into a suburb straight out of The Dick Van Dyke Show. And I mean that literally: their house is identical to the one Rob and Laura Petrie called home.

Well, it’s not identical. There’s a love seat where the ottoman should be. And of course there’s a much larger difference, in that the people living in the house definitely don’t belong there. We last saw Wanda (known to Marvel mavens as the superhuman sorceress who calls herself the Scarlet Witch) at Tony Stark’s funeral in Avengers: Endgame, and we last saw Vision being murdered by Thanos in the previous Avengers movie, Infinity War.

A lot of people came back to life in Endgame, but Vision – whose life-force was supplied by the Infinity Stone in his forehead, don’t ask, it’s a whole thing – was decidedly not one of them. That dude’s dead.

Except that now he isn’t? He’s living happily with Wanda in the quiet little town of Westview, a good six decades before his creation in 2015’s Avengers: Age Of Ultron. He’s working a nine-to-five job that no one fully understands, and every night he comes home to Wanda to deal with some wacky domestic problem in front of a live studio audience. Like I said: this one’s a departure.

And that’s even before the final shot of the first episode, which reveals that things are absolutely not what they seem – and teases a far more complex storyline than simple parody. The show’s already included a commercial for a toaster made by Stark Industries, for example, and there are further advertisements in subsequent episodes – all featuring the same two actors, and all offering callbacks to other Marvel stuff. Which teases another question: at whom are these TV spots aimed?

WandaVision takes another two episodes before it starts offering the vaguest of answers – and as it goes, the show slips forward in time from decade to decade, riffing on the 60s with Bewitched and the 70s with The Brady Bunch, respectively. Schaeffer and Shankman also introduce Teyonah Parris as a woman called Geraldine, who keeps getting mixed up in our heroes’ misadventures.

Those first three episodes constitute the first third of the series – which, for all of its structural affectations, is clearly telling one single, serialized story – and they’re all that Disney provided to critics, so basically I’m in the position of having to review a four-and-a-half-hour movie from its first act.

And I still have questions: what other sitcoms will WandaVision riff on? Will it stick the landing? What happened to Wanda’s Sokovian accent, and how is Elizabeth Olsen so good at channeling the energy of classic sitcom performers like Mary Tyler Moore and Elizabeth Montgomery through her Marvel character?

Oh, and if you’ve read Tom King’s amazing, tragic comic-book miniseries The Vision, where the synthezoid hero built himself a nuclear family and tried to establish his own suburban existence, you might be wondering whether WandaVision is an adaptation of that story. Based on a couple of key developments in episode 3, I don’t think so. But I also think Schaeffer and Shankman are very conscious of King’s series, so who the hell knows.

All I can be sure of, at this point, is that there’s a lot more going on outside of Westview than Wanda or Vision seem to realize. (Oh, and one other thing: Geraldine is not that woman’s real name.)

And the not knowing, honestly, feels great. The Marvel movies aren’t known for their unpredictability: since 2008, they’ve been pretty open about their overarching narratives and stakes, both from film to film and from grandmaster Kevin Feige’s carefully structured phases. Marvel might insist that the love story between Wanda and Vision is one for the ages, but it largely happened off-screen, with quick glimpses of connection in a couple of Avengers movies.

For all their power, they’ve been treated as peripheral characters, and the announcement of their series seemed like Marvel finding a low-risk vehicle for them. Instead, WandaVision turns out to be the sort of thing a company does when it knows their fan base will trust them to take a big conceptual leap – and it seems like the people behind it know what they’re doing. For the first time in a long, long time, I have no idea what to expect from a Marvel thing, and that’s a nice surprise.