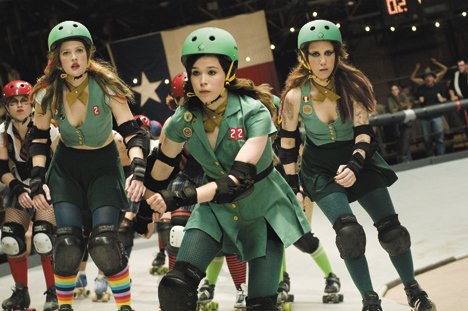 Barrymore gets good work from Harden, of course, and from Juliette Lewis, Kristen Wiig and Eve as Bliss’s sister skaters. Fortunately, Page has figured out how to play more than her usual teenager who shrugs at just about everything.

Jimmy Fallon is hilarious as the derby emcee, and credit the movie for not giving us a paint-by-numbers romance between Bliss and cutie musician Oliver (Landon Pigg).

Too bad the roller derby sequences aren’t more visceral – they could be a whole lot nastier, though maybe the words “insurance nightmare” can explain that. (The stars, including Barrymore, do all their own skating.)

And gimme a break, are there no dykes out there in roller derby land?