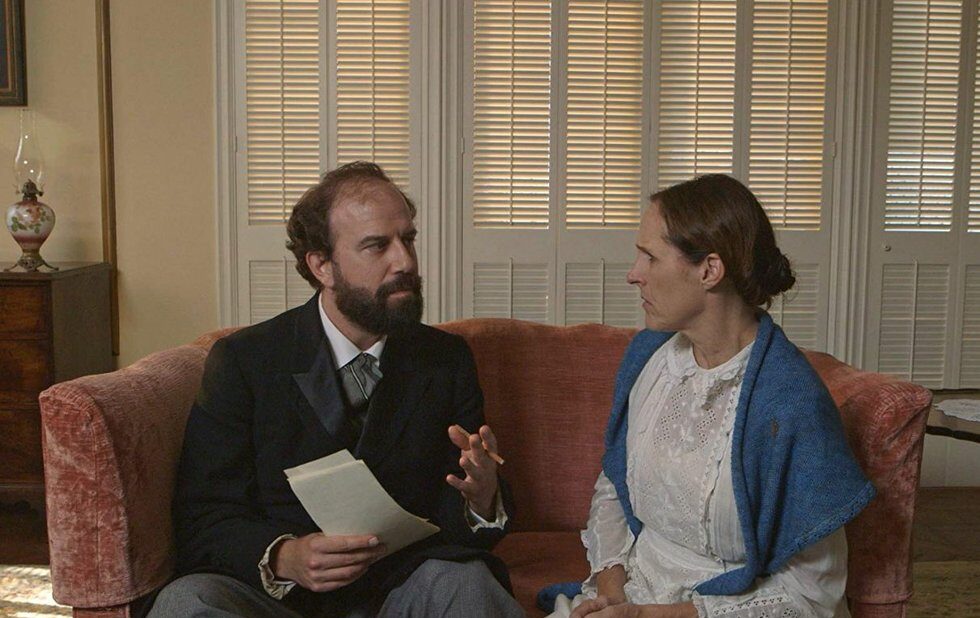 Three years after Terence Davies’s A Quiet Passion turned the frustrations of Emily Dickinson’s repressed life and career into an occasionally moving but somewhat stuffy drama, the American writer/director Madeleine Olnek tackles the 19th-century American poet from a different angle with Wild Nights With Emily.

The title should be a clue that this film will be rather different from its predecessor. Olnek’s movie is a much livelier outing than Davies’s historically accurate but emotionally hidebound biopic, which took such pains to re-create the suffocating details of Dickinson’s life that it smothered the drama.

Wild Nights is lighter and looser, flittering back and forth in time to explore Dickinson’s decades-long romance with her childhood friend and eventual sister-in-law Susan Gilbert. (Emily is played as a young woman by Dana Melanie, and decades later by Molly Shannon Susan, by Sasha Frolova and Susan Ziegler.)

Their bliss, which the film argues bubbled subtextually throughout Emily’s poetry and letters, was ultimately derailed by the arrival of Mabel Todd (Amy Seimetz), who not only replaced Susan in the heart of Emily’s brother, Austin (Kevin Seal), but ultimately erased her from Emily’s literary legacy as well: as the guardian of Emily’s work after her death, Mabel redacted Emily’s poems and shaped the public’s impression of the author as a timid recluse.

Wild Nights With Emily sets out to counter Mabel’s narrative with its own set of suppositions – of stolen kisses, clandestine meetings and elaborate attempts to disguise a thing that wants to be acknowledged and acclaimed. (It’s not an accident that this film is opening during Pride Month.) Olnek wants to celebrate Dickinson’s inventive, invigorating spirit, using clever metatextual flourishes to bend the fourth wall and remind us we’re watching a puckish hypothesis rather than a biography.

And though a synopsis of the film might read like a laundry list of affairs and betrayals, Olnek executes those moves with an antic, comic spirit. Her cast finds laughs in unexpected line readings and reactions that bolster the sense that we’re watching fully developed human beings rather than literary stock figures. There’s a throwaway joke about someone missing the point of Wuthering Heights that’s ingenious in its construction.

And Shannon – a terrific comic performer who’s always been able to tap into veins of insecurity and self-doubt – builds a fully considered character out of Emily, a woman of boundless creativity and ambition whose situation is entirely subject to the whims of others. When Olnek’s film slides into dramatic territory, it’s Shannon who makes that transition feel seamless.

By letting us see Susan in Emily’s writing – and by letting us understand the magnitude of the betrayal in Mabel’s erasure of her – Olnek honours the lovers’ emotional connection, and finds the power in Emily’s verse and the other things she left behind.

But seriously, that Wuthering Heights joke. I’d give anything to have come up with something that sharp.