NOW MagazineMovies & TVReviewsTV review: Wynonna Earp is back for season 4 and it hasn’t lost a step

TV review: Wynonna Earp is back for season 4 and it hasn’t lost a step 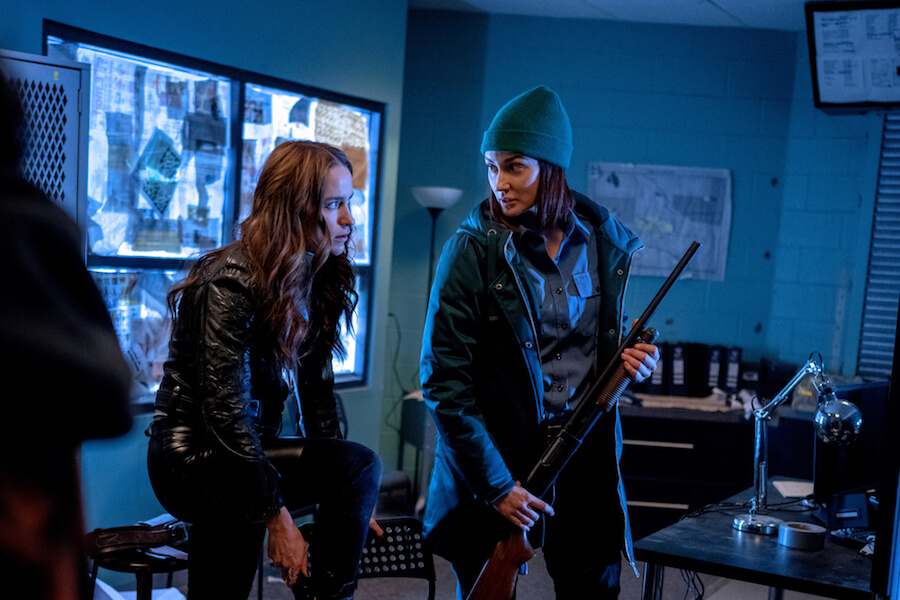 Wynonna (Melanie Scrofano) and Nicole (Katherine Barrell) prepare for battle, because it's that kind of show.

You know how some shows feel like they were made specifically for you? That’s one of the reasons I love Wynonna Earp.

From its very first episode, Emily Andras’s supernatural Western series – which rather radically reworks the characters and concepts of Beau Smith’s comic-book property – has scratched that post-Buffy itch for me.

Wynonna Earp is a scrappy, self-aware horror-comedy with rich emotional stakes, a mildly ridiculous storyline about Wyatt Earp’s descendants being cursed to battle the revenants of the villains he slaughtered in the olden days, and a really fun cast led by Melanie Scrofano as the show’s charming, complicated protagonist.

It’s got heart for days – though sometimes said heart is worn on the outside of a given character’s body – and an underdog vibe that’s gathered a small but ferociously fan base that call themselves Earpers. Count me among them.

Over three years, Andras and her team managed to sculpt some powerful love stories amongst all the monster-hunting and demon-bashing: Scrofano’s real-life pregnancy served as an excuse to forge a permanent bond between Wynonna and the aloof, immortal Doc Holliday (Vagrant Queen’s Tim Rozon), while the attraction between Wynonna’s kid sister Waverly (Dominique Provost-Chalkley) and local deputy Nicole Haught (Workin’ Moms’ Katherine Barrell) took root and grew into the show’s defining romantic storyline. Those three seasons are available on Crave, if you feel like catching up before the fourth gets started on Sunday (July 26).

About that fourth season: after ending season 3 with a cliffhanger that seemed to sever almost every key relationship in Purgatory, Wynonna Earp (the show, not the character) was plunged in limbo due to funding issues. After about a year, the series got back on its feet last fall and was derailed again when COVID shut down production in March. But have no fear: six episodes were completed, they’re shooting the back half now and from the evidence of the first two, Wynonna Earp hasn’t lost a step.

After losing Waverly and Doc to a heavenly portal in season 3, season 4 opens with Wynonna doing whatever it takes to find them – which turns out to mean roping an understandably devastated Nicole into the search for a missing scientist who might hold the key to opening another portal. Meanwhile, Waverly and Doc have to unlock some heavy mysteries on their current plane of existence.

If it all sounds too complicated, don’t worry about it; Andras and her team know none of this mythology stuff matters if we don’t care about the characters, and they’ve committed to the Buffy The Vampire Slayer model of enthusiastic monster-fighting, idiosyncratic characterization and unexpectedly heartwarming goofiness.

And Scrofano is, as they say, a goddamn delight, carrying the whole thing on her back without ever letting us see the effort. She’s one of the most expressive actors around, and the show knows it, leaning into every opportunity for an outsized reaction shot or an opportunity to break things up with some incidental foolishness – which gets us to let our guard down, and be walloped by real feeling.

Really, though, everybody on the show is giving their all. Wynonna Earp has a way of bringing out the best in people, and after that enforced hiatus it’s clear the whole cast and crew are delighted to be back and ready to deliver. The first two episodes give the actors plenty of emotional and physical action, throw some intriguing new curve balls at the master plot and reaffirm that the show’s relationships are still its greatest asset.

I would not dream of spoiling a thing. Wynonna Earp is back. That’s really all you need to know.