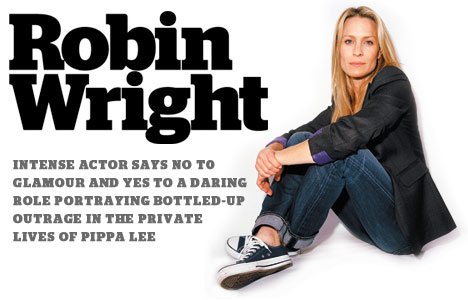 THE PRIVATE LIVES OF PIPPA LEE written and directed by Rebecca Miller from her novel, with Robin Wright, Alan Arkin and Keanu Reeves. A Maple release. 93 minutes. Opens Friday (December 4). For venues and times, see Movies.

When Robin Wright settles in for our conversation during TIFF last fall, I offer a little icebreaker.

She laughs at my reference to the sensational black leather number she was wearing on the red carpet.

“It was the only thing that fit,” she explains. “You get samples sent over from the runway, and I can’t wear certain styles because I’m built like a 14-year-old boy – skinny and flat-chested. The 14-year-old body never changed. I’d like to be a woman one day.”

Just over 5 feet and dressed in Converse sneakers, jeans and a blazer, she does look like a kid. She’s anything but in her new movie, The Secret Lives Of Pippa Lee.

In Rebecca Miller’s film based on her own novel, Wright plays a woman married to a man decades older and about to move into a retirement home.

Pippa seems not too stressed by her unusual life circumstances, but as the narrative uncovers her previous life, the many layers beneath all that placidity start to peel away.

Wright’s gone on quite the journey since starring in the soap Santa Barbara in 1984. Best known as the love interest in The Princess Bride and Forrest Gump, she hasn’t taken a cutesy role since, shining especially in collaborations with her ex-husband, Sean Penn (she just dropped his name after a roller-coaster year for the relationship).

In films like She’s So Lovely, The Crossing Guard and The Pledge, she pulls off not always likeable, offbeat characters – but while she’s always shown an eerie fragility, nothing prepares you for her knockout turn in Pippa. Wright conveys the emotional turmoil roiling beneath the surface. She’s genius at evoking reams of subtext without uttering a word.

There’s some kind of sweet poetic justice in the fact that just as she’s emerged from Penn’s shadow, she’s found a new, powerful presence.

Wright was able to ease into the role because she can relate to the demands on Pippa in her new circumstance.

“Every woman can relate to Pippa who has to adjust to changes,” she allows. “My daughter’s out of the house at college, and I have to adapt. That transition creates another colour palette and a different awareness of who you are in life.”

Not that she’s totally like Pippa, who’s emotionally guarded, on shaky ground everywhere she walks. Though hardly flamboyant and not exactly garrulous, once Wright gets going, she’s honest and forthright.

“I like the challenge of delving into that side of a personality that is the antithesis of me. Departing from self is so much more fun in our craft.”

With her piercing blue eyes and cheekbones to die for, she’s unnervingly beautiful, but in almost all of her movie roles she’s played down her looks.

“Robin’s actually a real character actress that beauty is incidental,” says director Miller in a subsequent interview. “She does whatever she has to do for the role, like in The Pledge – tooth missing, no makeup, dark hair.

“I was originally thinking of older women, and Robin said, ‘I don’t mind aging.’ Actresses don’t usually want to do that – it’s considered suicidal.”

Wright’s not in a panic about approaching middle age. At 43, she doesn’t buy the conventional wisdom that the movie biz is hostile to women over 40. (See sidebar).

“I’m going to work more in this next year on great roles in great movies than I have for the last 20 years,” she says. “I’ve loved every role I’ve played. Now, when you’re talking over 40, fuck, I’m getting great roles.

“Next up, I’m in Robert Redford’s new movie about Mary Surratt (the woman charged as a co-conspirator in the assassination of Abraham Lincoln), with James McAvoy. And I’m doing Ari Folman’s (Waltz With Bashir) next film, too.”

The connection between director Miller and Wright is obviously profound, as I discover when Wright interrupts us to say goodbye to her collaborator. “I love you madly,” she exclaims as they hug, both visibly upset that they won’t be seeing each other for a while.

“When the camera started rolling, she would inhale and close her eyes and exhale and open her eyes, and Pippa was there,” Miller recalls. “It was almost as if she was inhaling the soul of the character. When I’m watching, I feel like there is a soul that’s not Robin’s soul, as if she’s channelling someone else. That’s when acting becomes magic, when an alchemy of spirit takes place.”

Wright’s not so quick to take all the credit.

“Rebecca knew exactly what she wanted. But we all knew what we had to do because we had the bible – Rebecca’s book. What a gift. With the screenplay being directed by the person who wrote it and the same writer’s book to back us up, our homework was done.”

“Alan’s energy as a man – he’s the age that he is and he’s still freakin’ sexy. He still exudes that connection with women. He’s not dead, and that quality in him makes you believe that young Pippa and he could be together.

“We’d talk about philosophy and Buddhism. He’s lived a lot of life, gone through many marriages. I told him, ‘I’ve fallen in love with you,’ and he said, ‘You’ll get over it.'”

Wright never considered herself a natural actor. Born in Dallas and brought up in San Diego by a single mother who plied Mary Kay cosmetics, she started modelling to finance a trip to Paris, assuming that would be that. But her agent encouraged her to take up acting.

“Acting actually scared me,” she recalls about her early years. “I’ve always been shy. I can’t get up onstage. I’ve never done theatre,” she says, striking a terrified pose.

Last year, the allegedly shy Wright took on one of the most high-profile off-screen film jobs around – judge on the Cannes jury. She found it an experience like no other, especially the exchange of strong opinions and the willingness of jury members to listen with open minds.

“I didn’t go to college,” she says, suddenly invigorated. “I didn’t have the experience of open discussion and debate. I didn’t know what that was like even at a dinner table at Thanksgiving.”

And she’s definitely getting over that shyness.

“It’s a feast now. It’s all about getting older and getting over that stuff, because all that fear is about self-absorption and narcissism – stuff that we are into our 20s and 30s.

Not this time, however. Pippa’s a winner for sure.

See review of The Private Lives of Pippa Lee here.