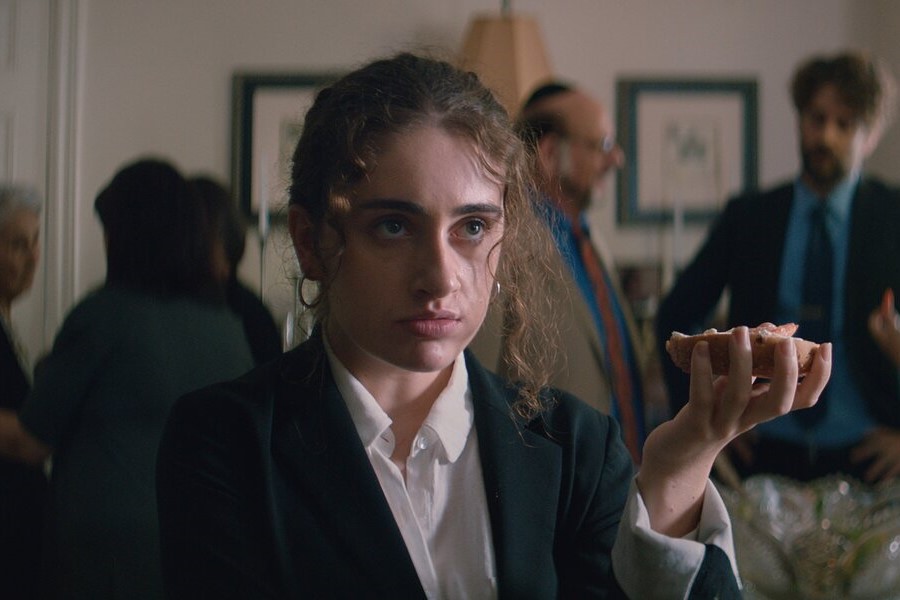 Danielle, the young New York grad student at the centre of Emma Seligman’s anxious comedy Shiva Baby, is very good at modifying her behaviour to fit the interaction of the moment.

With her sugar daddy (Danny Deferrari), she’s confident and sexy. With her parents (Fred Melamed, Polly Draper), she’s surly and uncommunicative. With her ex (Molly Gordon), she’s wounded and defensive and wounded.

And when she finds herself trapped at an afternoon shiva with all of them – along with her sugar daddy’s wife (Dianna Agron) and baby, whom he hadn’t bothered to mention – Danielle’s entire world spirals into chaos.

To reiterate, Shiva Baby is a comedy. And it’s proven to be as malleable as its put-upon hero, played by Rachel Sennott in an expansion of the character she created in Seligman’s 2018 short of the same name. The feature version played TIFF and Inside Out earlier this fall, and on Monday (October 26) it’s playing the fall edition of the 2020 Toronto Jewish Film Festival, where its cultural specificity will be right at home.

In the latest episode of the NOW What podcast, Seligman tells me about creating the movie’s world, and how her attention to the specific details of Shiva Baby somehow gives the movie a universality that lets it play to almost any audience.

“I was like, ‘Is this just going to feel so off to other audiences who don’t understand this world?’” she says. “But I think it was a combination of just writing every single beat based off an experience I had at a family event, and taking the worst or most interesting or funniest ones, and then trying to cast as many Jewish people as possible.

She gives a lot of credit to casting director named Kate Geller, who turned to the New York Jewish theatre community to fill out most of the cast.

“I don’t know if Fred grew up in New York – he lives in L.A. – and Polly Draper is not Jewish, but she’s lived in New York for quite a while and she’s married to a Jew. But the rest of our cast – especially all our supporting characters, everyone [Danielle] runs into that won’t let her go – were from the New York Jewish theatre community. Even if they weren’t Jewish they’ve been there for so long, mingling with everybody and going to their shows and family events, they understood that world. It helped bake in that sort of authenticity, even though I come from Toronto and they’re from New York. You know, we kind of met in the middle.”

None of Shiva Baby’s laughs are at the expense of the culture in which it takes place, mind you. The Jewish milieu is more of a foundation for Danielle’s anxiety, amplifying her sense that everyone has very specific expectations of her.

“I feel like people have seen the Jewish shtick a lot,” she says. “The Maisel, the Curb, they’ve seen the stereotypes. And I think those shows and films are incredible, but I really tried to make sure that each character seemed three-dimensional. I worked with the actors to round them out and create some three-dimensionality, and they were all very willing to do so. And because Danielle is young and she holds these other identities, that we were able to kind of see it from her, her genuine perspective, understanding all of these people. She’s sort of our way in.”

And if people can’t catch up to it in TJFF’s limited availability window, don’t worry; Seligman says Shiva Baby has secured a distributor and will be released next year – but she’s not sure when or how.

“We’ve been seeing some success with hybrid releases, in theatres and online, but no one knows what the next month looks like… at the very least we’ll be released like on video on demand via iTunes and Amazon. We’ll see what happens. But I’m very excited that it gets to reach people anywhere. Toronto has definitely had its chance to see it a few times with these festivals, but if they haven’t, they’ll be able to watch it at home sometime next year.”

You can listen to the entire conversation on Apple Podcasts or Spotify, or just play it below.

NOW What is a twice-weekly podcast that explores the ways Torontonians are coping with life in the time of coronavirus. New episodes will be released every Tuesday and Friday.