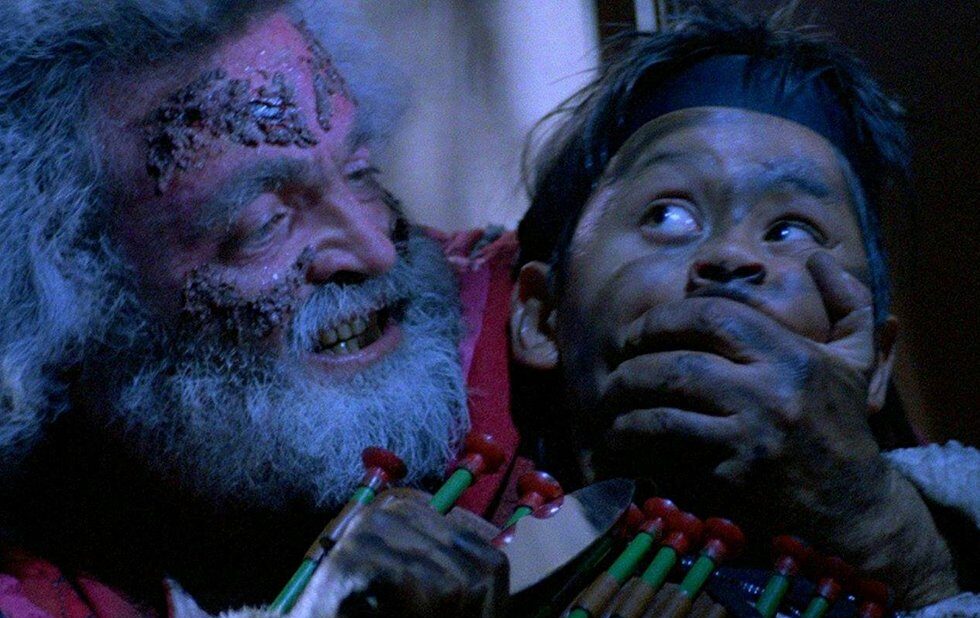 Dial Code Santa Claus has been remastered in 2K just in time for Christmas.

Justin Decloux, webmaster of Film Trap, co-host of the podcast The Important Cinema Club, and writer/director of the indie genre features Teddy Bomb and Impossible Horror, and Peter Kuplowsky, programmer of TIFF’s Midnight Madness series and producer of The Interior and The Void. (Fun fact: Kuplowsky also played the villain in Teddy Bomb.)

Laser Blast Film Society, a showcase for strange, forgotten should-have-been classics from the 80s and 90s. “We wanted to champion eccentric films made during the VHS era,” Kuplowsky explains, “particularly productions produced exclusively for home video. Traditional rep programming lures audiences with nostalgia we try and show films that few people have even heard of.”

“We literally used to project VHS tapes,” adds Decloux, “but as the series went on and we began to receive support from the Ontario Arts Council and could afford renting 35mm prints, we expanded the scope of our programming to all cinema strange, absurd and obscure. Most of what we play has never screened theatrically in Toronto, Canada or ever.”

On December 20, Laser Blast has arranged a special holiday treat: an encore presentation of French filmmaker René Manzor’s 1989 thriller Dial Code Santa Claus, in a new 2K digital restoration. “It’s basically an R-rated Home Alone where a predator dressed as Santa Claus stalks a Rambo-obsessed child in mansion estate that belongs in an Argento or Gilliam film,” Decloux explains. “And John Hughes was apparently in France during its release. Just sayin’.”

“We originally showed it in our third year,” says Kuplowsky, “but given that it has finally received a remastered release and is touring North America thanks to the American Genre Film Archives, we wanted to help cement its status as your new favourite Christmas movie.”

The film is screening at the Royal Cinema.

Laser Blast genuinely cares, is why. “The impression we try to dispel is that we play bad movies,” says Kuplowsky.

“It’s about sincerely celebrating eccentric directors, writers and actors, and their unique artistic decisions – as baffling as they may be,” says Decloux. “We’ll defend everything we show as being at the very least, very entertaining to watch.”

“We do not encourage ‘so-bad-its-good’ reactions to the films,” Kuplowsky says. “We even run a ‘no talking, no texting, no irony’ PSA before our screenings.”

Kind-hearted mayhem is encouraged, and occasionally achieved. “In the spirit of strange films we celebrate, we do a lot of silly shtick,” Decloux says. “Costumed intros, comedy sketches… Santa has stormed the cinema to hold us hostage during an intro… twice.”

“We go out of our way involve filmmakers too, especially for our Canadian films,” Kuplowsky adds. “For the maple-syrup martial arts flick Dragon Hunt we had one of the infamous McNamara brothers in attendance. For the Ontario-shot Jesse Ventura vehicle Abraxas: Guardian Of The Universe we had director Damian Lee, and we had screenwriter Mark Cutforth for the romantic slasher-spoof Unmasked Part 25. Our series culminates each season with the What The Film festival, where we host contemporary filmmakers that are on the precipice of achieving cult status with their brilliant and bizarre films that fail to get support at conventional festivals. Next year’s edition is March 1 to 3 – save the date!”

In addition to the What The Film festival, 2019 will bring 35mm screenings of Norman Mailer’s berserk neo-noir Tough Guys Don’t Dance in January and the Canadian martial-arts virtual-reality actioner Expect No Mercy in February. And they’re continuing to scour the earth for a 35mm print of Steve Wang’s Drive. (Decloux: “One of the great unsung action films of the 90s.” Kuplowsky: “It’s our white whale.”)

If you have one, stop by the screening and hook them up.