... well, maybe not, but with a documentary on "the Egyptian Jon Stewart", this year's lineup isn't as grim as usual 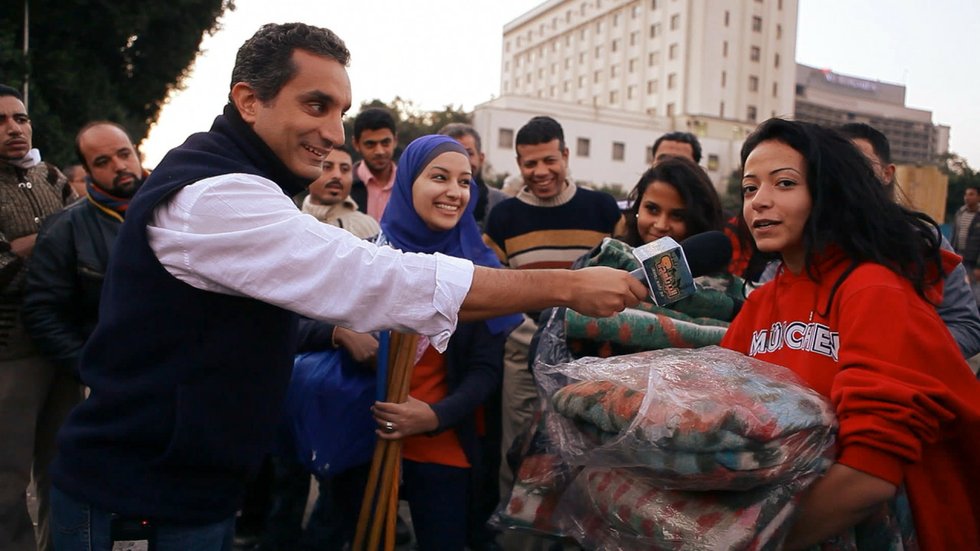 Bassem Youssef meets his public in a still from Tickling Giants.

The Human Rights Watch Film Festival carries itself with an essential seriousness. And how can it not? Every year, the festival returns to the TIFF Bell Lightbox to show audiences how terrible things are in the rest of the world.

And given that the rest of the world seems especially awful this year, the 2017 HRW lineup struck me as strangely optimistic. This year, the festival feels hopeful, even inspirational. Maybe things are turning around out there. Or maybe we’ve just hit bottom, and there’s nowhere to go but up.

It all gets rolling Wednesday night with A Syrian Love Story (March 29, 8 pm, Rating: NNNN), Sean McAllister’s documentary about a couple, Amer and Raghda, who met in a Syrian prison and became intimates over months in captivity after their release, they married and started a family.

But as I wrote when the film first screened in Toronto at a Cinema Politica screening more than a year ago, that’s a ridiculous oversimplification of their story you really need to see McAllister’s film to get the full picture. And it’s worth it.

Tickling Giants (April 1, 6:30 pm, Rating: NNN) looks at the comic career of Bassem Youssef, a Cairo heart surgeon and massive Jon Stewart fan who reinvented himself during the Arab Spring as a political satirist on YouTube, which led to his own comedy program on Egyptian television: The Show, a Daily Show knockoff so shameless that it even replicated the design and color scheme of Stewart’s set.

Youssef’s material wasn’t exactly sophisticated, but the mere fact that he and his writers dared to tweak authoritarian leaders like Mohamed Morsi and Abdel Fatah al-Sisi was revolutionary. Filmmaker Sara Taksler – a producer on the real Daily Show – tags along with The Show on its rollercoaster ride, and if Tickling Giants never digs as deep as it could, it’s still a fascinating look at a culture just beginning to understand the power of sarcasm.

Returning to the Lightbox after playing TIFF and ImagineNative last fall, Alanis Obomsawin’s mammoth documentary We Can’t Make The Same Mistake Twice (April 2, 2 pm, Rating: NNNNN) hasn’t lost any of its power or its stature.

Obomsawin uses the landmark discrimination complaint by Cindy Blackstock and a number of first-nations activist groups (which became a federal human-rights case over the inadequacy of federal funding for indigenous children) to investigate the structural nightmare that is the state of Canada’s indigenous support system – a bureaucratic maze built on indifference and outright apathy. It runs almost three hours, and you’ll feel it. But it needs to be seen.

The doc feels a little overstuffed as it goes along, but individual segments are chilling and compelling in equal measure – especially a look at the way citizen journalists and security cameras came together in Rio de Janeiro to clear the name of a protestor falsely accused of attacking police during a riot.

Most screenings will be followed by filmmaker Q&As or panel discussions. Those will be worthwhile, too.