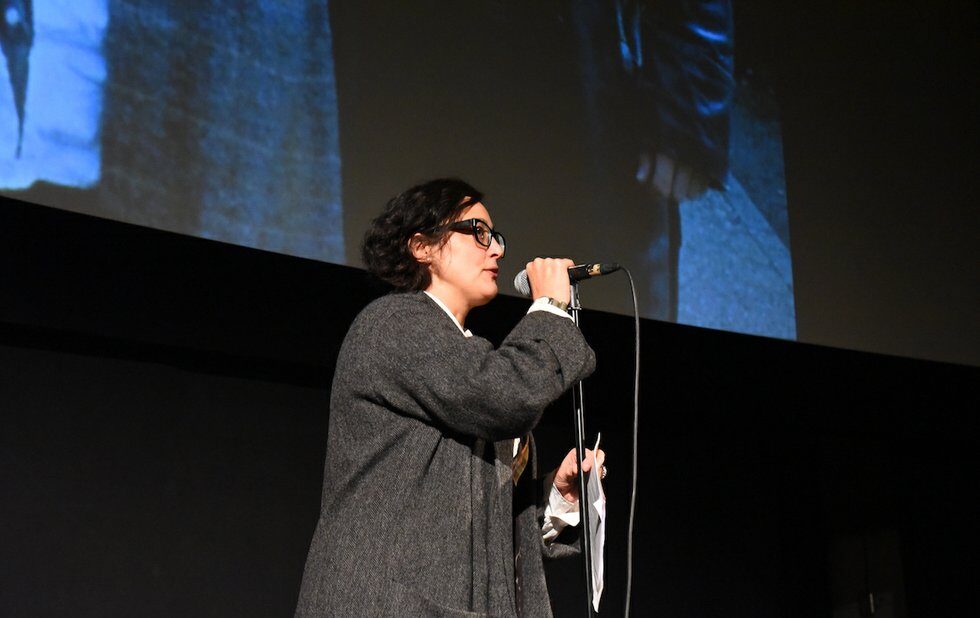 Nathalie Atkinson, arts and culture journalist for The Globe And Mail and former fashion critic with a background in design history and material culture.

Designing The Movies, a monthly series at the Revue Cinema (400 Roncesvalles) “where art direction, sets, costume and production design are the lens for analysis,” says Atkinson.

Joseph Losey’s Boom!, screening Thursday, February 7 at 6:45 pm. “Roger Ebert called it fascinatingly bad,” Atkinson explains, “and it is. Ludicrous and histrionic Elizabeth Taylor turns it up to 11 – and she won an Oscar chewing scenery as Edward Albee’s Martha [in Who’s Afraid Of Virginia Woolf?] so that’s really saying something. It’s weirdly stylized, with a kabuki structure adapted by Tennessee Williams himself for director Joseph Losey, who’s always interesting, with cinematography on location in gorgeous Sardinia by Douglas Slocombe, who did the first three Indiana Jones movies, and has a score by John Barry. It’s both over the top and less than the sum of its parts.”

“The Revue’s programming director Eric Veillette encouraged me to shape something around my interests, so I created a series that expands on angles I sometimes take in my work as a film critic – like highlighting how costume helps convey character or the use of space in set design. The approach is the constant the choice of movies themselves varies widely across eras and genres.”

“Each screening is preceded by an introduction, usually an onstage conversation with a guest creative, and is illustrated with a slide show I put together of the movie’s influences, visual references, and cultural context,” Atkinson says. “I try to strike a balance between personal favourites I want to explore [The Women, Withnail & I], layered crowd-pleasers [Auntie Mame, Rear Window] and idiosyncratic wild cards that my guests are excited about – for example, the cartoonist Seth chose Forbidden Planet because he wanted to talk sci-fi genre design.”

Fashionable, of course. “New people usually attend the series for the first time based on the movie but they come back again because of the format,” Atkinson says. “After three years there’s now a group of enthusiastic regulars (who are otherwise strangers) that mill around the lobby to chat afterwards and sometimes go for drinks. And I have been known to take requests – that’s how a screening of Mahogany on the racial politics of fashion came about.”

Despite the series’ interest in costume, “there is no cosplay element,” she reports. “Except maybe at my annual screening of Withnail And I, when everyone accessorizes with a pint of cider.”

HOW DOES A FAMOUSLY TERRIBLE TAYLOR-BURTON ROMANCE FIT THE BILL?

“On top of the spectacular set, costume and production design – including clothes by Karl Lagerfeld – it’s because it’s so unbelievably bananas that I want more people to see it,” Atkinson says. “John Waters calls it the best failed art film ever and ‘the other side of camp,’ so the timing is also perfect because of the Met’s big upcoming exhibition Camp: Notes On Fashion, inspired by Susan Sontag’s 1964 essay.”

“Otherwise, I’m on a bit of a dystopian production design kick. I’m digging into that with Jacques Tati’s Mon Oncle [April 18] followed by Brazil [May 16]. It’s frankly eerie how prescient Tati was on the dehumanizing effect of modern technology and the pitfalls of the smart home with his ultramodern Villa Arpel set back in 1958. His vision of the future basically came true.”