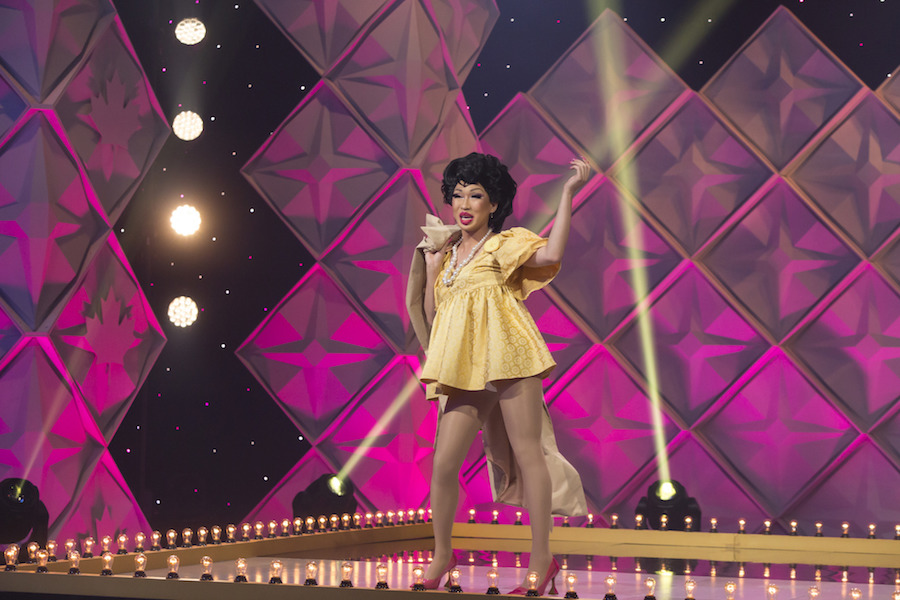 Suki Doll rolled the dice and paid the price.

The Montreal drag performer and working designer had established herself as a funny and fashion-forward contestant on season two of Canada’s Drag Race with memorable couture-inspired runway looks. Her silhouettes eschewed the curvaceous body-centric style that has become the norm in drag and her references, like an episode-one homage to late couturier Azzedine Alaïa, winked at the fashion nerds in the audience.

In this week’s Made In Canada runway category, she went deep into Canadian indie film history with a tribute to Mina Shum’s breakout 1994 drama Double Happiness, which became a star-making moment for lead actor Sandra Oh. Suki Doll’s trench with oversized pink buttons wowed the judges, but an homage gone awry from earlier in the episode ultimately put her on thin ice.

The morning after her elimination, we caught up with Suki Doll to chat about why she loves the movie Double Happiness, repping Asian fashion designers on the runway and quitting her day job to do drag full time.

How did you become a drag performer?

Eight years ago, I started doing drag because one of my exes who was a drag queen – and still is a drag queen – put me in drag and I was like, “Oh my god I look phenomenal!” I got obsessed. Drag is at a cross road of everything I like and appreciate – I love fashion, I love makeup, I love hair, looks, aesthetic, I just love performance, I love singing. I started out as shooter drag – the drag queen in the club that sells you shooters. That’s why I’m so mouthy because I had to sell to drunk people.

What’s your best sales pitch for a shooter?

“Who’s birthday is it?! It’s not your birthday but now it is! Open your mouth!” That was years ago. Is it still appropriate? Maybe!

So this wasn’t your week on Drag Race. How did it feel watching the Snatch Game back and your performance as Yoko Ono?

When you go through it, you think of the worst. You’re expecting to look really trashed. But I’m a person who’s very resolute and I’m very proud of the decisions I take on as a challenge. And Yoko Ono is a challenge – let’s not lie to each other here. It was a difficult one to take on and the humour is very different from what Snatch Game is typically about. I tried it out. I’m very happy with it. I felt great and I’m happy with what I’ve done and accomplished.

What do you like about Yoko Ono? She’s had a long career and there are many approaches you could take when impersonating her.

Yoko Ono is such a misunderstood artist. I wanted to play with awkward moments. What I realized later on – after the Snatch Game – is not everybody reacts with laughing to awkwardness. And Yoko Ono is all about those awkward moments, lengthy talks and deep philosophical things. And that’s what I was playing on.

In the Canadian icons runway, I really liked your tribute to Sandra Oh in the movie Double Happiness. What was it about Sandra Oh in that movie that you wanted to capture?

Sandra Oh was originally known mostly from that movie, which got her on her trajectory that she’s on today. Double Happiness is from an Asian American perspective and what double happiness means is the happiness of your family and finding your own happiness. In that movie, when she was in this scene where she had the trench coat and is running in the rain, it was so dramatic and it was a turning point. That trench coat I was wearing is my double happiness moment. My double happiness is my drag and making sure that my family understands what drag is – that it’s an art form and that it’s valid. I had to prove a lot of things. That’s why Sandra Oh made such a big impact and I had to represent her.

Is your family, your mother or the women in your life represented in your drag?

Absolutely. It’s funny because I only realized later on why I’m so adamant in continuing my drag. I feel like I’m living through my mom’s teenagehood and young adulthood that she didn’t have a chance to live through because she was a young mother having six kids. She didn’t have a chance to do the crazy things that Suki is doing. When I do Suki on any platform, I feel like I’m living for my mother. My mother is represented in every aspect [of my drag]. I got the fashion side from her – she’s bedazzled more than I am. She might be a better drag queen than I am.

I saw you tweet that you recently saw her in person for the first time in a long time.

In the pandemic, I didn’t see my mom for two years. The first time I saw her was actually at the premiere of Canada’s Drag Race. We just saw each other as she came through the door and I’m telling you I had full makeup and I was like, “You cannot cry!” I had to do the premiere. I missed my mom so much and I’m happy that I got to see her on such a big occasion. It was a tough, emotional moment for Suki.

Can you talk about where you get your fashion sense? You paid tribute to the designer Azzedine Alaïa in episode one and really carved out a reputation as a fashion queen with your entrance look.

Fashion goes hand in hand with my drag. The entrance look was by a designer that I got to know named Terrence Zhou. He’s a Chinese designer from Wuhan who is now based in New York. It’s very important for me to represent my community so to win the first mini-challenge in an outfit designed by somebody from my community was such a big statement. I couldn’t ask for better. It was my gag-worthy moment.

As a designer what style or silhouettes are you drawn to?

You recently quit your day job to do drag full time. How big a deal was that?

I couldn’t believe it. My career was always the epitome of what I achieved in my life and so drag is taking it a step further. Fashion will always follow Suki but to quit my corporate job to do what I want to do as a passion and bring fashion to it is a dream come true. I’m not working 9 to 9 in fashion – I’m doing 9 to 9 in drag instead.

Watch a video interview with Suki Doll below:

This interview was edited for length and clarity.