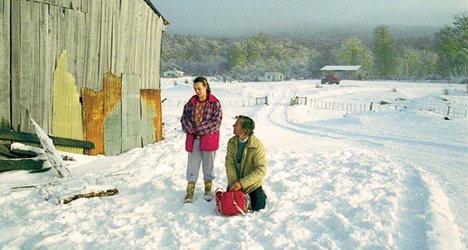 As you may have read, TIFF Cinematheque is giving Lucrecia Martel’s The Headless Woman a limited run this week down at its AGO auditorium.

The film is making its Canadian premiere as the centerpiece of a Martel retrospective, which shares Cinematheque space this week with a salute to another Argentine director, Lisandro Alonso. And that series is far more important, because it features the first Toronto screening of Alonso’s terrific Liverpool in more than a year.

Liverpool screened in the 2008 Toronto Film Festival, after making its bow at Cannes the previous spring. It made its rounds on the international festival circuit – I myself caught up to it in London – and then vanished from sight. It screens tonight (Friday) at 7 pm, and repeats Sunday at 6 pm. Barring some last-minute miracle, this is the last time you’ll have a chance to see it until someone decides to release a DVD.

And don’t even count on that Alonso’s films are virtually unavailable on video in Canada, the US and the UK only his first feature, 2004’s Los Muertos, managed to squeak out on disc under the Facets label, and it took nearly four years to do it. Cinematheque is screening that one Tuesday at 8:45 pm.

On strictly practical terms, I understand why no distributor would touch Liverpool it’s a virtually impossible sell. By turns oppressive and bleak, following an alcoholic sailor, Farrell (Juan Fernández), as he makes his way into the mountains of southern Argentina for his first trip home in more than a decade, it presents us with a mystery that refuses to be unpacked.

Alonso makes films about opaque characters on journeys only they themselves understand they don’t discuss their motivations or their backstories with anyone, and the films provide no exposition whatsoever. When the credits roll – or, as is the case with Liverpool, the film simply ends – we’re left to piece together meanings and relationships as best we can – and that allows us to keep the movie alive, puzzling out its characters and trying to understand why Alonso has shown us what he’s shown us.

I don’t want to make the movie sound impenetrable, because it’s anything but that. Liverpool may be bleak in its visual construction and grim in its narrative, but it’s a powerfully alive movie, raw and emotional, and there’s real pleasure to be had when you let yourself fall into its rhythms.

I’d certainly rather sit through it again than the cold, impenetrable husk of Martel’s The Headless Woman. Seriously, why does that one land the theatrical run and the DVD deal while Liverpool circles the cinematic memory hole? The gods must be as drunk as Farrell. [rssbreak]