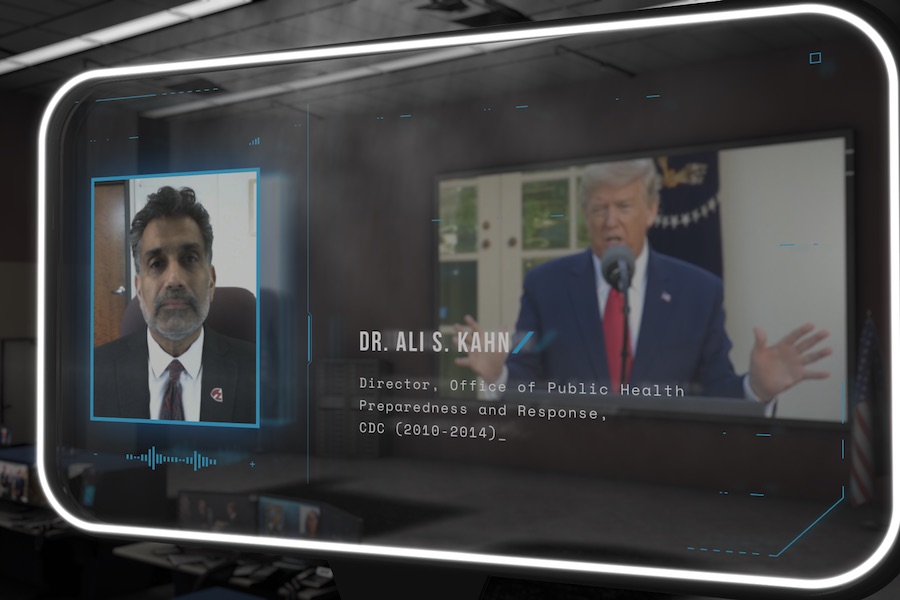 Adam Benzine’s The Curve is not the first documentary about the COVID-19 pandemic.

Totally Under Control, produced and co-directed by the American filmmaker Alex Gibney, was released on October 13, just days before Ai Weiwei’s CoroNation screened in the Planet In Focus festival just days later. (I reviewed both of those films here.) And of course Hao Wu, Weixi Chen and Anonymous’s documentary 76 Days, about the initial outbreak in Wuhan, played TIFF in September.

But The Curve – which the Toronto-based, Oscar-nominated Benzine and his producers are making available for free on YouTube in the run-up to the U.S. election, as promised – goes about its duties differently. Rather than create a first draft of history, as the direct-cinema 76 Days and CoroNation attempt, or present a tick-tock of America’s failure to contain the virus, as Totally Under Control does, Benzine’s project acts as an explainer. It doesn’t just present the Trump administration’s disastrous incompetence in the face of the novel coronavirus, but digs into the reasons for that incompetence, both ideologically and strategically.

It all comes down to Trump, of course – and we will see more documentaries in the future that elaborate on how his specific mixture of narcissism and ignorance made him the absolute worst person for the job of President during a global disaster – but The Curve has a larger argument to make.

Focusing on the first three months of the pandemic, from the first American COVID-19 case in January to the Easter weekend when Trump had randomly chosen as his target for bringing the country out of lockdown, The Curve examines the myriad ways in which the U.S. failed to limit the spread.

You already know most of it: the travel ban that targeted China when the virus was already coming in from Europe, the botched test kits, the supply-chain collapse that prevented PPE from reaching the health-care workers who needed it most, and Trump’s impulsive decision to turn the requisitioning of ventilators into a competition between states. Most of that came from Trump’s indifference to the workings of government, of course, and only caring about things that stood to benefit him directly.

But The Curve digs deeper, asserting that Trump’s dismantling of the pandemic response team in 2018 – reassigning its members to John Bolton’s nuclear proliferation squad, thus guaranteeing their purview would be of lesser importance – represents the moment it all went wrong.

By insisting nuclear terrorism was the only threat to the United States worth monitoring, Trump and his people made the country more vulnerable to a viral menace – annihilating the economy, dooming tens of thousands of people to preventable deaths, and millions more to suffer unprecedented psychological and financial stress.

The Curve lays this all out in under an hour, with a gallery of journalists and international experts walking us through each aspect of America’s COVID-19 failure. And while Benzine borrows the structure and aesthetic of a disaster movie for his documentary – the better to hold a casual viewer’s attention, I suppose – he never resorts to sensationalism or exaggeration; that’s entirely Trump’s thing, and we see the President employ over and over again in clips from press conferences and public appearances.

Trump’s obstinance and hostility, it’s explained, is the result of a life spent creating an alternate reality in which he simply refused to entertain any challenge to his firehose of brand-embellishing bullshit, and eventually wore down any opposition to his invented world-view.

It’s a workable strategy for a businessman, but it left him absolutely incapable of responding to the pandemic with anything other than false hope and hyperbole. As it turned out, he was no better at responding to the deep divides in the racial and socioeconomic fabric of the country which the crisis exposed in the spring.

Again, it’s nothing we don’t already know. But as with Totally Under Control, it’s helpful to have all this information in one place. And maybe releasing it the week before the election will help shift a few votes, and save a few lives. That’d be nice, anyway.

Director Adam Benzine discusses the production and release of The Curve in the latest episode of the NOW What podcast, available on Apple Podcasts or Spotify or playable directly below: