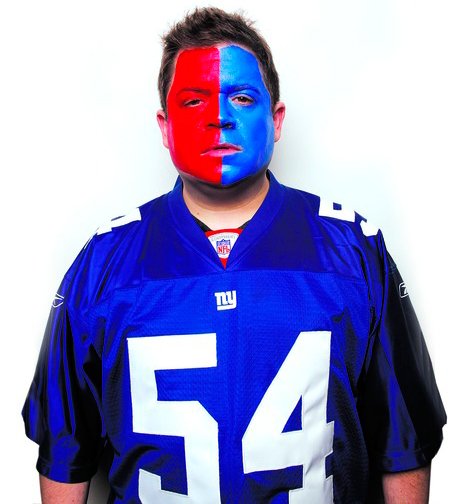 Patton Oswalt understands the passion of the fanboy.[rssbreak]

If you’re familiar with his stand-up, you know he wears his geek credentials on his sleeve, throwing around obscure references to nerd culture – a glimpse of a Mad Max dystopia here, a shout-out to Jeff Goldblum in The Fly there – without worrying his audience might miss them.

The latter truth produced the magnificent track on his 2007 album Werewolves And Lollipops, At Midnight I Will Kill George Lucas With A Shovel. Oswalt spins an elaborate fantasy of going back in time and stopping Lucas before he could destroy his legacy with The Phantom Menace.

Every beat is perfectly calibrated to convey the comedian’s unassailable love for the original films, while incorporating the fans’ deep sense of betrayal over Lucas’s insistence that what the Star Wars saga most needs is a young, adorable Darth Vader.

Oswalt gets it. He feels our pain.

So it’s not much of a stretch to see him cast as a fanatical New York Giants supporter in Robert Siegel’s drama Big Fan. Except that here, Oswalt is playing a guy whose dedication to his beloved football team has curdled into an all-consuming obsession.

“He just looks like the guy I pictured,” Siegel says over the phone from New York. “I also knew that he kind of understood the psychology of nerd obsession. I knew he would have a grip on what it’s like to care way, way too much about something, something that most people couldn’t give a shit about.”

Oswalt’s character, Paul Aufiero, wants nothing to do with the world beyond the Giants. He spends all his free time writing and rewriting the little rants he phones in to a local talk-radio show every night.

“I really loved the writing of those call-in pieces,” Oswalt says from his home in Los Angeles, his infant daughter burbling in the background. “He’s clearly agonized over these things that are so banal there’s nothing original being said, nothing really emotional being said. It’s just a string of clichés, which I love. Just the limited growth and development you can see going on.”

Oswalt didn’t need to research the role too deeply.

“It was more like just reading the script and admitting things about myself – about my same geekdom, just in different areas – and then imagining if that had gone too far.

“I’ve seen people like this before,” he continues. “Being a film buff, you go to theatres like the New Beverly or the Egyptian here in L.A. and you see the Paul Aufieros of the film-fan world, who are just so far gone.”

From Paul’s perspective, his radio appearances – where the anonymous parking-lot attendant who lives with his mother suddenly becomes a blustering warrior taking on all naysayers – allow him to be part of some larger community of sports fans.

“I think that’s kind of a common thing,” Oswalt says, “people wanting to take up more room in life, just by being attached to something much bigger. It tricks them into thinking they’re connecting with people, but they’re just becoming an appendage to this much larger, amorphous thing. They’re not really connecting to anybody – I don’t think they’d even know what a one-on-one connection is any more.”

Click the image to read a review of Big Fan

As a celebrity himself, and one whose passion for nerdy things has endeared him to more than a few pop-culture obsessives, Oswalt is aware he’s walking a fine line here.

“I’ve been very, very lucky,” he says, “in that most of the people who like me have tended to be really cool and polite. I’ve had a couple of isolated incidents, but I’m trying not to live the kind of life where I’m bothered by those people, you know? I’m not trying to reach out to people on the Web all the time, and be at places where those kind of people are hanging out.”

Oswalt’s casual fans – people who know him only as a semi-regular on The King Of Queens, or as the voice of Remy the rat in Pixar’s Ratatouille – are going to be pretty surprised by the depth he shows here.

Siegel admits that hiring comics for a drama can often feel like stunt casting and their performances can be distracting.

“Most often that’s when they cast really big comic stars – you know, when Will Ferrell does his dramatic turn, or Jim Carrey,” he says. “But guys with a comedy background are generally very good at drama – certainly better at drama than a tragedian would be with comedy.”

For his part, Oswalt’s not necessarily interested in more starring roles. He’s happy, he says, building a resumé of interesting character parts in projects that excite him. Most recently, he’s popped up in an episode of the new sitcom Community and in Steven Soderbergh’s corporate comedy The Informant!

“That’s the kind of career I’ve always wanted,” he says, “the Harry Dean Stanton/M. Emmet Walsh career. I would hope when people see me, they’ll say, ‘Oh, this part’ll be good!’ You never want to be the shitty part in a great movie sometimes it’s more fun to be the fun part of a bad movie, in a weird way.”

How does he juggle the acting, the comedy and the new baby?

“Management and the laws of physics,” he laughs. “We try to make it all work. You have to map it all out way, way ahead of time, but people are very accommodating.”

Oswalt’s personal geekdom leaks out a little when we commiserate over the cancellation of Joss Whedon’s Dollhouse, which gave him a powerful dramatic showcase last year as a heartbroken Internet mogul – a knockout performance that he’ll reprise in the show’s final episodes.

“Yes, he is coming back,” he says. “They did a whole thing with me. Again: very, very gratifying.”

Patton Oswalt on finding his character:

Oswalt on shifting between blockbusters and smaller movies:

Oswalt on actors who condescend to working-class characters:

Oswalt on his long-term plans: