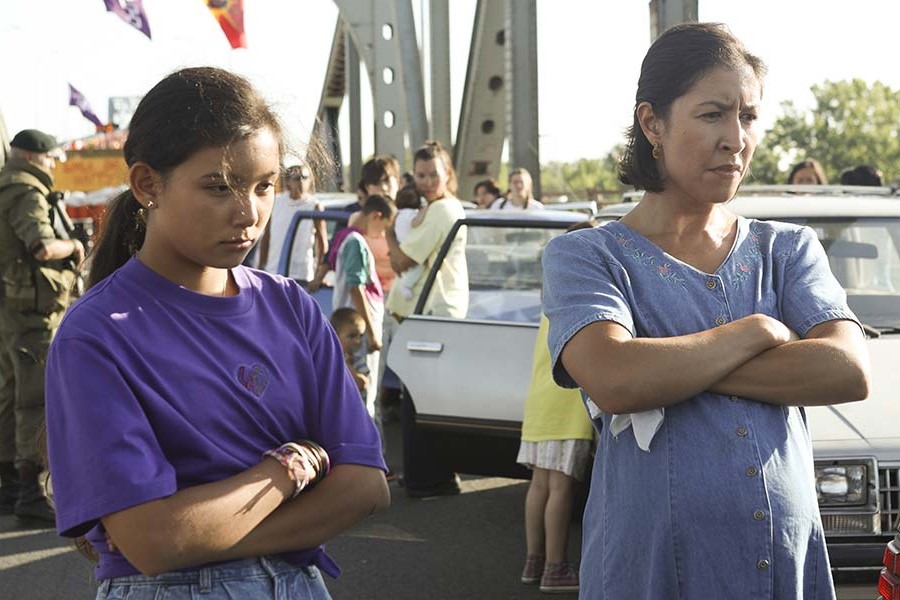 Kiawentiio (left) and Rainbow Dickerson take a stand in Beans.

The kid’s given name is Tekehentahkhwa, but everybody just calls her “Beans.” She’s a happy kid, living with her parents and kid sister in a Mohawk community in rural Quebec. She likes art and beading and candy. And over the summer of 1990, she watches her world collapse into chaos and horror.

Beans plays out during the Oka Crisis of 1990, when Quebec’s Indigenous communities faced off against Canadian police and military forces over the expansion of a golf course into a burial ground on Mohawk land. The first feature from longtime documentarian and TV producer Tracey Deer (Working It Out Together, Mohawk Girls), it’s a drama about a kid trying to understand why everything around her is charged with violence and rage, and figuring out how she should respond.

Deer is working in an intriguing semiautobiographical mode here, framing Beans’s fraught coming of age against the very real trauma of the Oka standoff – and slowly tightening her movie’s dramatic screws to show us how Beans moves from innocence to outrage. The film’s smartest narrative device is its extensive use of TV news footage from the era, with plenty of white Quebecois stepping up to interviewers and eagerly telling them how little they think of their Indigenous neighbors: this is the world Beans and her family have grown up in, a landscape of seething racism and uncaring dismissal.

Beans’s mother (Rainbow Dickerson) believes they won’t be respected until they behave respectfully; Beans is already beginning to understand that her mother’s faith in humanity is sorely misguided, and finds herself drawn to some older kids who aren’t bothering to hide their anger. But that anger is nothing compared to what they’ll see from their white neighbours.

As the young protagonist, Kiawentiio – making her feature debut after a few episodes of Anne With An E – is sensational, showing us Beans’s childishness and self-absorption (she’s 12, of course she’s self-absorbed) eroding against the demands of the moment. Beans makes questionable choices; she experiments with clothes and boys. But both the actor and the director make sure we understand Beans always knows exactly who she is, and the space she wants to occupy.