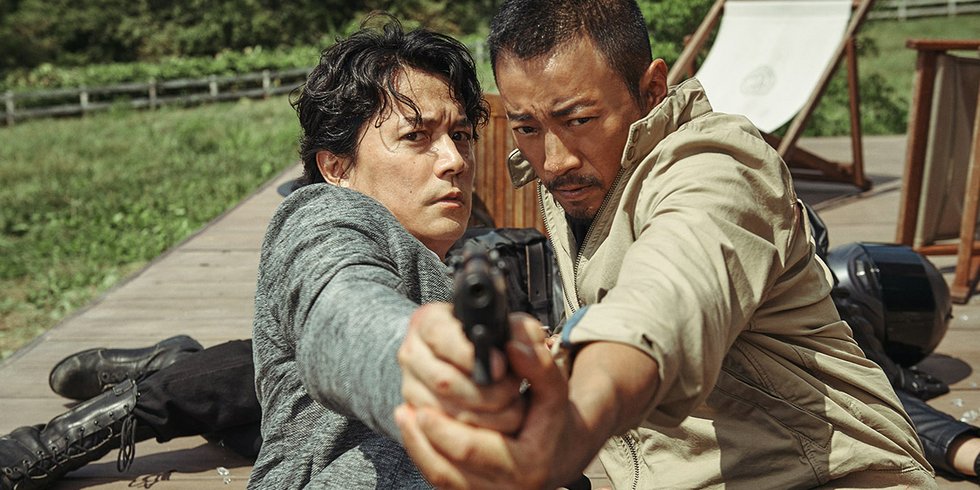 Manhunt is what happens when John Woo takes a Japanese novel Kimi Yo Fundo No Kawa O Watare (“You Must Cross The River Of Wrath”), previously filmed in 1976 by Junya Satō, and turns it into an over-the-top mash-up of The Fugitive and Universal Soldier.

The story is ostensibly about a Chinese lawyer (Zhang Hanyu) trying to elude a dogged Japanese detective (Masaharu Fukuyama) after he’s framed for murder in Osaka, but really it’s just an excuse for wall-to-wall chases and shootouts and henchmen and dirty cops and a pair of acrobatic assassins (played by Ha Ji-won and the director’s daughter Angeles) and evil pharmaceutical corporations who experiment on the city’s homeless population. And there’s other stuff too, which is even sillier and more preposterous.

Billed as a return to his earlier, scrappy form after a decade in the wilderness making grand Chinese epics, Manhunt feels more like self-parody than self-assertion, with Woo foregoing the clear, coherent action sequences of The Killer and Hard-Boiled for a bunch of distracting digital tricks. And not all of the cast is as comfortable shifting between Chinese, Japanese and English as Zhang and Angeles Woo, which makes for some occasionally challenging conversations.

Manhunt is a movie for the die-hard fans who’ve stuck it out with Woo over the last decade or so. If you’re amped up for another all-out bullet ballet, it’ll go down just fine. The rest of us, though, can expect to wince as often as we cheer.