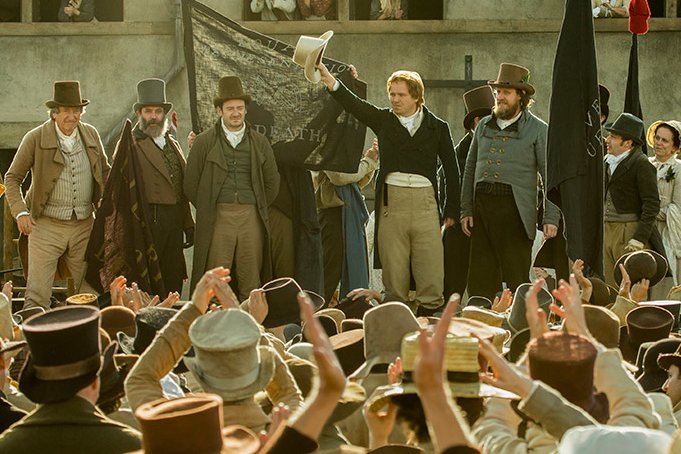 The biggest movie writer/director Leigh has ever attempted, Peterloo dramatizes the events leading up to the massacre of suffrage protestors in St. Peter’s Square in Manchester by the British cavalry with the tacit permission of the government and the Crown. It’s a horrific story, and one that clearly matters to Leigh, who grew up there more than a century later. But his approach is ill-suited to the material.

Spending more than two hours getting to the morning of August 16, 1819, Peterloo drifts back and forth between two dozen key characters – Manchester activists arguing over how best to bring their issue to the people, the wealthy industrialists and clergy out to smother the movement, a traumatized soldier (David Moorst) and his working-class family, a pacifist London orator (Rory Kinnear), the scheming Home Secretary Lord Sidmouth (Karl Johnson), the decadent Prince Regent (Tim McInnerny), and more.

As the time passes, it’s clear that Leigh’s working-class sympathies are undermining the drama, rendering his villains as sneering cartoons rather than human beings.

I don’t doubt for a moment they were terrible people, but they were still people – which is something Leigh usually factors into his films. Not here, and Peterloo is the worse for it.