TIFF 2019: Five things you missed at Michael B. Jordan and Jamie Foxx’s talk 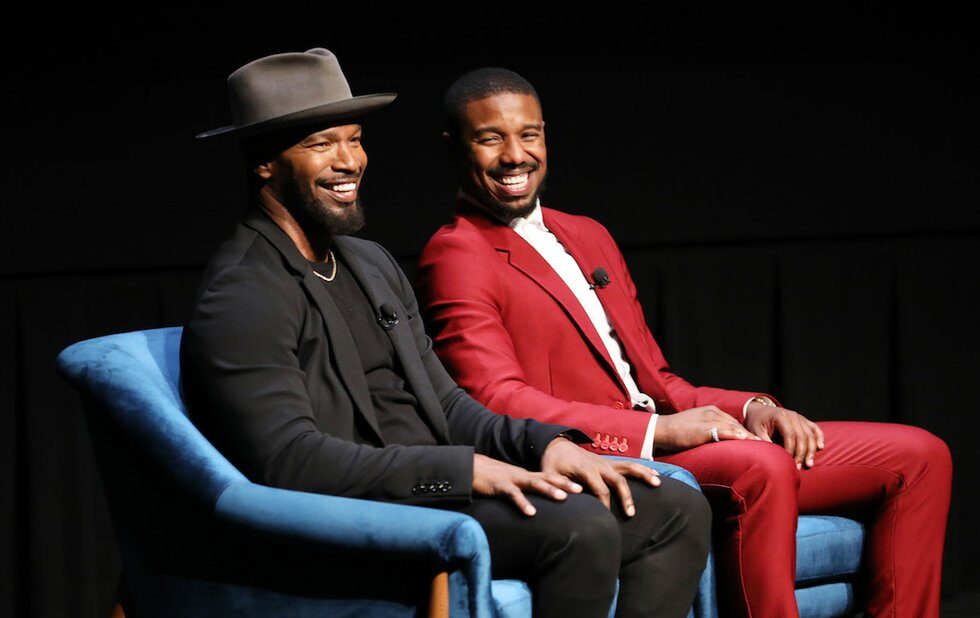 Jamie Foxx and Michael B. Jordan have a bromance that’s going to win award season. Foxx does a lot of the talking. He can be wiser and goofier while regularly celebrating his younger colleague who appears humbled, focused, passionate and hungry to make a difference.

The actors have a vibe, comic repertoire and generational interplay that will be all the talk as they present Just Mercy, their wrongful conviction drama about activist and lawyer Bryan Stevenson, to Academy voters for the next few months. The film hits all the upsetting and emotional notes you’d expect from a drama that draws parallels with To Kill A Mockingbird. There was a chorus of sobs at the TIFF screening I attended on Friday night.

The next day, the duo sat for an In Conversation session that brought laughs and a few touching moments of its own. Hosted by TIFF co-director Cameron Bailey, the chat covered both men’s careers, sketch comedy show In Living Color and movies The Wire, Collateral, Fruitvale Station, Black Panther and, of course, Just Mercy.

Here are five things you missed.

1. Jamie Foxx having a blast with Michael B. Jordan’s hotness

Women were sobbing at sight of Jordan on Friday’s red carpet, where he donned a long and regal black-and-white smoking jacket.

“Ooooh that boy hot,” cried Jamie Foxx when he stepped onstage with Jordan at Saturday’s In Conversation. The ladies in the audience hollered as Foxx provided commentary on Jordan’s fitted Burgundy suit. “Go on, get it out ladies, get it out.”

Foxx then lunged sideways striking his own pose. “Could you just do one shot for the Instagram right here?”

Foxx, 51, doesn’t seem too torn up about not being as shredded as he once was, even when being eclipsed by Jordan, who is in Adonis shape. The veteran advised the 32-year-old to just enjoy the ability to pack muscle in one of those elder speeches and occasionally referred to Jordan as “young man.”

Describing his own recent stints at the gym, Foxx talked disappointment: he’d work out for two hours, get swole and see that pump deflate by the time he got to the car. The former comic whistled the sound of a punctured balloon.

Mimicking Ray Charles won Jamie Foxx an Oscar. He even discussed how he learned the late singer’s rhythms and cadences through old tapes and in-person meetings, while performing those impersonations live on stage.

Charles wasn’t the only uncanny impersonation we got. There were hilarious impersonations of Quincy Jones, Ronald Reagan, Sammy Davis Jr., Dave Chappelle and Mike Tyson. He did Quentin Tarantino’s reaction during the Django Unchained casting session when Foxx told the filmmaker that he owns a horse (“YOU HAVE YOUR OWN FUCKING HORSE!”). He also impersonated that horse, or rather an interpretation of how he thinks she thinks (“She’s a Black horse in her mind.”) And then, upon audience request, he gave us his mouthful impersonation of Sylvester Stallone.

3. Michael B. Jordan talking about replacing Chadwick Boseman on All My Children

Bailey brought up an anecdote about Jordan’s Black Panther co-star, Boseman, who revealed earlier this year that he ditched his first gig as Reggie Montgomery on All My Children because he was uncomfortable playing a Black stereotype (the character was a former gang member). It was an uncomfortable revelation for Jordan who was brought in within a week as Boseman’s replacement. Jordan, who starred as a young drug dealer in The Wire, played Reggie Montgomery for three years.

Foxx chimed in: “Were you getting him back for that when you threw him off the mountain?”

4. Foxx detailed his transition from comic to dramatic actor

The conversation chronicled Foxx’s development as a performer: going all the way back to  his childhood, watching Johnny Carson, stealing the material he saw and doing those bits at school.

But the transition to drama came through roles for directors Oliver Stone (Any Given Sunday), Taylor Hackford (Ray) and Michael Mann (Collateral). Foxx credits Mann for giving him discipline when instructing the actor to remove his own ego from the performance: “How about you don’t do your thing? How about you’re a cab driver?”

But Foxx also dug up an anecdote from In Living Colour to explain that working on comedy is prep for serious drama. He explained that every comedian is actually super serious when working on their comedy, including his costar Jim Carrey, who he watched write and prepare Ace Ventura Pet Detective while on the sketch show’s set.

“They are serious about comedic timing.”

The evening ended on a touching note when Foxx offered a serious appraisal of Jordan’s career.

“You did Fruitvale Station,” said Foxx. “And you laid down these artistic railroad tracks.”

Foxx drew a through line in Jordan’s work, noting the passion and Black pride the young actor brings to every role, from Fruitvale Station to Creed and Black Panther and most recently with Just Mercy.

“You still bring that integrity,” said Foxx, who then went on to praise Jordan for both his social justice cinema and for being the first to adopt the Inclusion Rider in his production company (the contractual clause for representation introduced by Frances McDormand at the Oscars).

“Our hope is that we all become part of this wonderful narrative and try to change things.”