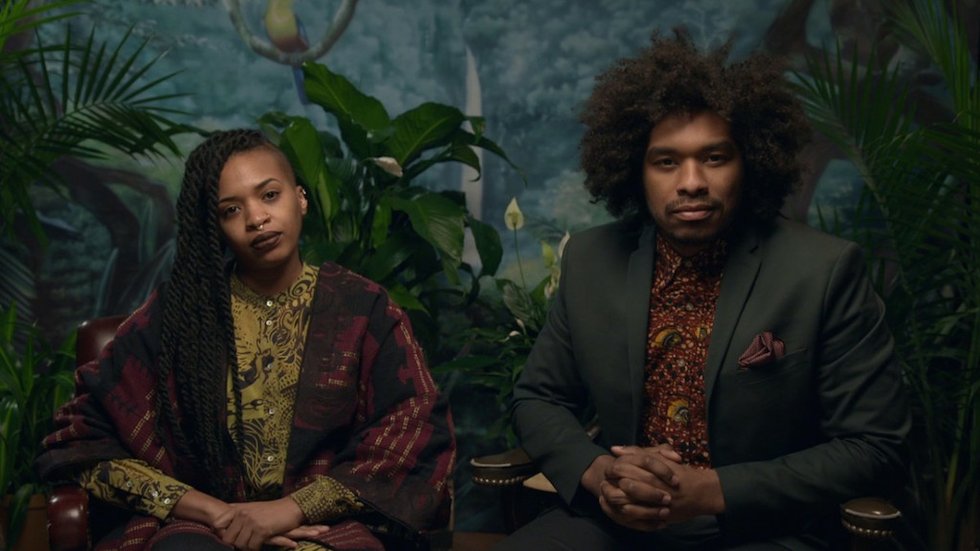 Doreen Garner (left) and Terence Nance co-host a sketch that explores sex in the Black community.

Random Acts Of Flyness is a series that’s fully aware of its after-midnight time slot. With sketches modelled after lo-fi public-access television and infomercials, it understands that the only direction to go that late at night is down the rabbit hole.

Producer, director and star Terence Nance has created the kind of show that piles on enough stream-of-consciousness, meta-narrative, avant-garde, post-postmodern elements that you’re not exactly sure what you’ve watched after finishing it. It’s manic in its rapid-fire mix of live action, animation, video footage and puppetry. But it isn’t without a point.

Nance says the six-episode series is about “the beauty and ugliness of contemporary American life,” and its chaotic structure vividly illustrates the mental gymnastics you have to undergo just to make sense of life in America.

Its premiere episode features a stand-out sketch called Everybody Dies! A parody of an educational kids show, it stars Tony Award-winning actor Tonya Pinkins as a grim reaper who ushers young, Black children into the afterlife. Via nursery-rhyme songs and The Murder Map (a bullet-riddled map of America), Pinkins instructs kids that they can die at any moment, whether it’s by running from the police or running from a stranger who thinks he’s the police (a reference to the 2012 murder of Trayvon Martin by neighbourhood watch volunteer George Zimmerman).

As the sketch progresses, the mental health of Pinkins’s reaper degrades as she struggles to process the inevitability of so many young Black deaths, and the sketch itself begins to break down to the point of becoming incomprehensible.

Like Everybody Dies!, much of Nance’s black comedy (he also serves as series co-writer) hits you at full tilt. Combined with the show’s frenetic pacing, which includes numerous animated interstitials, it’s almost as if he’s trying to trigger both sensory and emotional overload. But he pulls back at just the right moments, providing graceful breathers that make equally powerful points.

There’s a recurring visual sequence, called Blackface, which features shots of various Black people’s faces alongside the racist caricatures that were a part of American popular culture in the 19th and 20th centuries. As the sequence progresses, the shots of real Black people begin to displace the stereotypes, making an elegant commentary about the community’s breadth and depth.

That same breadth is on display in the talk show segment The Sexual Proclivities Of The Black Community. Nance and co-host Doreen Garner aim to counter Black, bi-invisibility in the media by interviewing Yeelen Cohen, a bisexual Black man, who opens up about his gender fluidity.

While Random Acts Of Flyness has star power – Jon Hamm, Lakeith Stanfield and the Roots’ Black Thought all make appearances – the series is at its most engaging when it gives its point of view over to the experiences of everyday people like Cohen, who are also making sense of and affirming their experience in contemporary America.