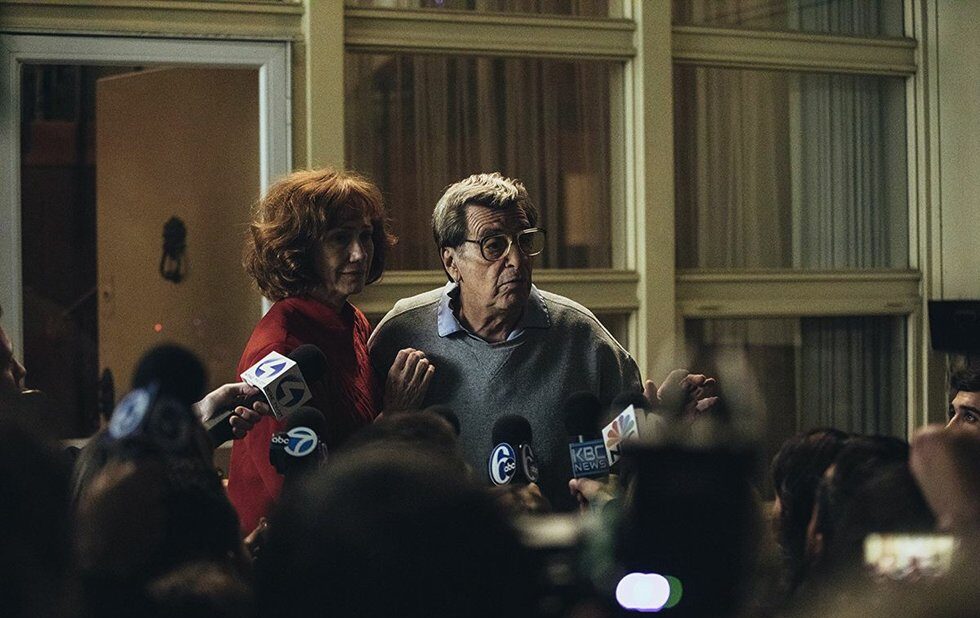 The Penn State sex-abuse scandal exposed complicity in college sports, but Barry Levinson’s drama about the school’s legendary football coach only skims the surface of the culture that allowed it happen.

In November 2011, the school fired Joe Paterno, then the winningest coach in U.S. college football history, when it came out that he barely acted after being informed assistant coach Jerry Sandusky – later convicted on 45 counts of molesting young boys over a 15-year period – was seen raping a 10-year-old boy in a locker room shower in 2002.

Yes, the coach fulfilled his legal duty by telling university officials, but when nothing happened he did… nothing.

Paterno opens with the coach undergoing an MRI that becomes a time machine as its golden walls reflect a canvas of memories in a flashback montage – a device Levinson leans on many times and the sole cinematic flourish in his otherwise straightforward retelling.

Though HBO’s trailer overplays some Pacino-y “hoo-ha” moments, Paterno is toned down by the actor’s standards. Sporting a honking prosthetic nose, he portrays the coach in a permanent daze that becomes his armour against the creeping reality that his career is over.

Instead, Levinson’s probing close-ups and flashbacks are more concerned with whodunit-type tension that teases what Paterno knew and when – a point of dispute among his supporters following the damning FBI report that concluded he did in fact conceal information.

But what we want to know is why he turned a blind eye to a serial child rapist, not how or when. It’s a timely question given #MeToo has caused so many men to reassess actions once thought of as benign.

Unfortunately, Debora Cahn (The West Wing) and John C. Richards’s (Sahara) screenplay spends too much time on subplots about a local reporter (Riley Keough) struggling with the superficiality of the national news media and a teenage survivor (Benjamin Cook) experiencing bullying.

The subplots suggest a toxic culture that encourages silence, but they are generic and come off as token gestures designed to appease critics who might say – as Paterno did in facing down the angry mob – the victims should be the focus, not the coach.

The best scenes in Paterno are the awkward deliberations between the coach and his wife Sue (Kathy Baker) and adult children (Annie Parisse and Greg Grunberg), who go from incredulous to horrified as Paterno is unable to offer convincing explanations.

Pacino has often been criticized for playing a caricature of himself, but despite the prosthetics he brings subtlety to Levinson’s closeups. He’s both weary and intense, imparting Paterno’s frustrating inability – or refusal – to recognize his own lack of morality better than any flashback could.